I. A tool changes its quality in a negative way if it continues to receive negative thoughts.

II. A tool that receives negative thoughts often affects the owner and the people around it.

III. In exchange for the negative effect it brings upon the people around it, it may show a mysterious charm and function.

IV. At the end of receiving all the negative thoughts and curses from humans, it will obtain human qualities.

It was the only way to describe it when you looked at it. One side was about 1 meter long, and there was no hint as to the object's use.

Yachi Haruaki stared at it with an obvious look of disbelief on his face.

"Excuse me, sir, could I have your signature?"

Haruaki checked the receipt. It was written in English since it was sent from abroad, but the name written for the sender was just as he expected.

Another one of THOSE, you stupid old man?! Haruaki groaned silently to himself.

"Thank you, sir! Phew, I've had a hard time carrying this. It was so heavy! Well, may I ask what this thing is, sir?"

"Er, you see, my father loves to collect antique objects, so he sends some that he bought while abroad every once in a while... Hmmm... I also wonder what this is!"

Haruaki tried to evade the question. It was no lie though. It was just that he wasn't sure how weird this particular object that his father had sent to him this time was. Of course, he didn't bother explaining that to the delivery man.

After the delivery man had driven away, Haruaki looked down again at the strange box lying in front of his gate.

"What is this, really? Well, it was my old man who sent it, so it's got to be something troublesome for sure."

The important question was to what degree will it be troubling? Haruaki cautiously touched the cube, feeling the cold sensation of the steel. It had no lid, so he supposed that it was a boxed-shaped "something", rather than a box to put "something" in. He examined the surface closely and noticed that there were numerous lines and curves that hinted a joint seam.

"Is it some kind of puzzle box? Maybe it has to undergo a certain process to activate or something...? Hmmmm, maybe I'm just thinking too much. I suppose these kind of things are the ones that don't have a specific use, now that I think about it. I've made up my mind! It's nothing important, I'm sure. My peaceful life will go on just as it was..."

Haruaki told himself this as he played with the seams. He thought he heard a surprised wail. He stopped moving and closed his eyes. After he calmed down he told himself,

"...That was an auditory hallucination."

While he was trying to convince himself, the cube let out a sound of grazing steel, and a part of its surface moved. Haruaki peeked at the space visible from the part of the cube that looked like a popped-out CD tray. He saw metal parts with different shapes that looked like cogs entangled inside. He tried to trace them with his fingers, but all that did was to move them. Nothing had happened except for the low moan that he thought he heard.

"Oh, another auditory hallucination! That's it, uh-huh. Well, it's none of my business anyway! Since it has nothing to do with me, the best thing to do is to leave it alone!"

For the moment, he decided not to think about it. However, it would be bad if he left the cube at the front of his gate, so he brought it to the room where the other objects that his father sent were being stored.

He started to walk toward the main building of his house. On his way, he thought he heard a dissatisfied snort but, of course, he decided it was another one of those auditory hallucinations.

Haruaki woke up inside his 6-tatami[1] Japanese room. He hurriedly checked the clock and saw that it was already past 7:00 PM. It was already dark outside the window. He only planned to take a nap after carrying the black cube to the storage room, but ended up sleeping until now. Maybe it was because he wasn't able to sleep well last night.

Oh hell, my stomach's already complaining in hunger, but I still haven't made anything to eat...

He did have a housemate living in a separate building, but he was usually alone, so it was unlikely that he'd find a cooked meal. Besides, the package that his father sent came right after he came home from school, so he hadn't had the chance to prepare something to eat. Haruaki got out of the bed and was thinking about the chores he was going to do when he heard faint sounds. The sound of someone's footsteps, the sound of someone scavenging inside the cabinet, and finally, an unknown crunching sound.

Haruaki looked out the window and checked the second floor of the other building. There were two windows and one of them had lights on. That meant that his housemate was there. 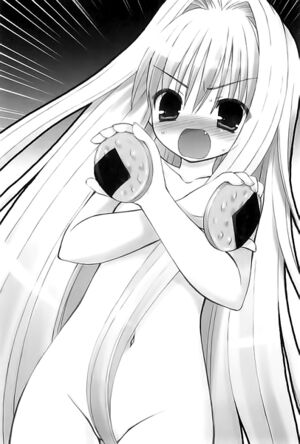 His whole body tensed. This traditional Japanese house was old and wide. It was an excellent prey for burglars. Haruaki opened the sliding door and walked silently down the hallway. The sound came from the kitchen. He held his breath and silently walked there, feeling like a burglar himself.

The moonlight illuminated a small figure crouching in front of the cabinet. It also reflected long silver hair. Observing its shadow, Haruaki decided that the figure was female. Her hand was alternating from her mouth to the plastic bag she was holding. The unknown crunching sound was coming from there. His calm observation ended when he realized the amazing view in front of him. Without a thought, he pointed his finger at the female figure and shouted,

The girl stared back at Haruaki. She had long silver hair and fair white skin, with a slender body and a beautiful face. It was shrouded with grace and strong will, with contradicting qualities playing in her expression like trick art. A fragment of a rice cracker in her mouth fell as she also pointed her finger towards Haruaki and shouted,

The girl looked down at her body and a shade of red spread across her face.

"Don't tell me you're planning to play with my body again?! What a shameless man!"

She knelt down and started to throw every object that was within her grasp: a tray, a wooden plate, a teapot, among other things. She did it with great control. Haruaki slipped on the object that he had accidentally stepped on while trying to parry the flying projectiles. Objects started to pile above him.

The girl crossed her arms in front of her modest breasts, her hands still holding the round-shaped rice crackers. Haruaki lost his voice as he froze up upon seeing the unreadable expression on her face. The girl tensed up for a moment and shouted at him,

Haruaki understood from the words she said that SHE was the box that he received this afternoon. Tension left his shoulders and he dropped them as he thought,

I knew it. That stupid old man... He did it again.

He sent another cursed tool again!