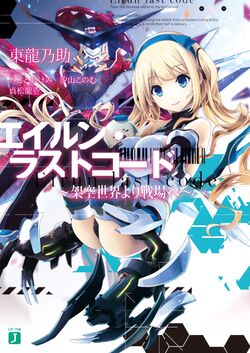 According to Section B of the Baka-Tsuki TLG Translation Common Agreement, Under no circumstances would you(b2)...

submit translated works(a) copied directly from an unauthorized source such as, but not limited to, online, written sources etc. . If you(b2) submit works(a) that have been authorized by their rights holder, permission, in the form of written/electronic/printed must be available upon request.

This is the lie in the truth, the change of daydreams in reality. No, it's the story of the souls of the changed human race. AD 2070. More than half a century has passed since the humans first got attacked by the mysterious living entity known as [Mariss].

But the spirit of Celen, the pilot of <Black Witch> Destbloom, the only Heavy Weapon that can possibly oppose Mariss, has been repeatedly sapped by the hopelessness of battle. Before going out for a sortie, she had been captured for scheming to escape, and was forcibly made to sortie on the battlefield.

But, on that day, a miracle fell onto the battlefield.

A mysterious Fighter from an unknown nationality appeared with a SuperWeapon not obtainable from this world and purged Mariss.

The humans were roused.

Even then, the Pilot that came out from that Fighter was a carbon copy of Eirun Bazatt, the Pilot in the hugely popular anime [Doll Waltz Requiem]-!?

All editors who speak English proficiently are welcomed. TLC are most welcomed