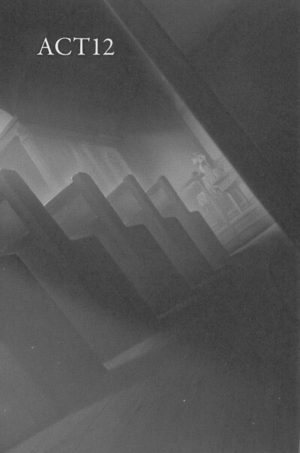 Matō Kariya had fallen into a pitch-black dream.

He could see nothing.

He could hear nothing.

Only his skin could feel the shockingly dense pressure of the darkness.

Where, is this — here seemed to be inside someone’s body.

Therefore, Kariya asked the darkness—who are you.

As if with a suffocating pressure, the darkness rumbled low. Like the angry roars of stormy winds; like the sky had fallen and the earth had cracked.

The dense black shadow that moved within the darkness was like a human shape poised to attack.

The bones and skull immersed in the pitch-darkness.

The pair of bright eyes even more terrible than the darkness.

Berserker—the manifestation of Matō Kariya’s curse, no, the Servant his hatred had called from the ends of time.

"No need to praise my name—

No need to envy my body—

I am the shadow under the radiance of heroic spirits—

Birthed of the darkness of glorious legend—"

Like a miasma that rose forth from underground, the sound of sighs of hatred wrapped around Kariya from every direction.

Kariya began to feel uneasy; just as he was about to turn his gaze, the icy touch of metal gauntlet gradually neared, catching mercilessly on Kariya’s clothes.

Thus was Kariya’s thin body lifted into midair, before Berserker’s eyes—he was fixed in a position where he could not but meet that crazed gaze.

Nourished by the sighs of the people precipitated within the darkness, people that curse the light—"

Kariya struggled against the gauntlets mercilessly locked around his throat, groaning in pain. In his eyes, yet appeared another indistinct and confused scene.

A sword shining bright light, and holding onto the hilt, a radiant young warrior.

This person was not a stranger to Kariya.

That was the Einzberns’ Servant – Saber...

"This is my disgrace—

Because of her unsullied glory, I must forever be belittled—"

The face revealed was shrouded in darkness, but that pair of fiery eyes, and the teeth trembling from hunger, could be clearly seen.

"You are, the sacrifice—"

He pronounced coldly, embracing Kariya without another word, coldly flashing sharp teeth piercing into his jugular.

But this scream could not move the other. The berserk Black Knight sucked at the blood seeping from Kariya’s throat, and swallowed heavily.

"Good, give me more—

Your blood and flesh, your life—

Let them ignite my hatred—!!"

Kariya used all the words he could think of to beg forgiveness, hoping there would be someone to extend a helping hand, but in this darkness, it was impossible for him to obtain salvation.

A miasma of red flashed intermittently before his eyes, consciousness confounded by pain and fear gradually becoming foggy.

But he still squeezed out the last remaining bit of strength, and cried out in his loudest voice.

—Waking with a pained cry, he was still within the darkness.

But even thus, the stench of rotting given out by the ice-cold and damp air, as well as the hair-raising sound emitted by thousands of worms crawling, still told him clearly—this was, without question, the real world.

The dream of just now, compared to reality, exactly which world seemed more merciful to Kariya—

At least, from the one fact of being able to forget that this body was about to die, perhaps remaining in the world of nightmares would be happier.

By exactly what miracle he—burned and having fallen from the rooftop of a building—had been saved, and how he had returned to the underground worm storage of the Matō residence again alive, was now impossible to understand through his memory alone.

His limbs felt dulled, but he knew that he was chained to a wall, his hands shackled. He could not stand on his own feet; his shoulders, supporting the weight of his entire body, hurt as if they were about to be torn from their sockets. But compared to the itch of the worms covering his body, it was not even worth mentioning.

The worms licked at burnt skin, and under that skin was new skin colored pink. It looked as if the burns were currently healing—though the reason was unknown.

It looked as if the Crest Worms intended to use Kariya’s body as a seedbed to extend his life. But this was completely useless. In order to re-grow the skin, prana had already been forcibly consumed; the few days of life left in Kariya’s body were also about to dry up. He could clearly feel that even the simple action of drawing a breath and then expelling it was depleting his strength.

Very soon, he would die--

At the same time he understood that he was absolutely unable to put up resistance, Aoi and Sakura’s faces were constantly flashing in his mind.

He had once vowed to save them with his life as the price… but in the end, his wish had not been fulfilled. This disgrace and shame tortured Kariya’s heart even more than the pain of his body.

Remembering the faces of the people he loved, but immediately after, the indifferent expression of Tōsaka Tokiomi and the sneer of Matō Zōken invaded his heart, pressed onto him until he could not breathe.

From the depths of his dry throat, Kariya cursed angrily with all the strength he had left.

The sound of his sobs was suddenly muffled by a sound of pleasured laughter that came from behind him.

The worms scurried to avoid the elderly and small silhouette propped up by a crutch and slowly walking closer to Kariya. It was none other but precisely the object of Kariya’s hatred, Matō Zōken.

"Ah, Kariya, you are really quite pitiful like this."

The elderly magus used his crutch to poke at Kariya’s jaw, forcing him to lift his head. Kariya no longer had the strength to rail at him, but nevertheless used his remaining right eye to glare at the other with hatred and murderous intent. Just looking disdainfully at his opponent already exhausted him.

“Don’t get it wrong—I’m not reprimanding you in any way. With such serious injuries, I’m surprised you came back here alive—Kariya, I don’t know who it was that saved you. But luck does not seem to be bad in the battle this time around.”

Zōken, murmuring gently to his ‘son’ as if caressing a cat, was in a particularly good mood today—thus the implication of evil was written all over his face that was full of smiles.

“Three Servants have already been taken care of; only four remain. Truth be told, I did not think you could actually hold out till now. It looks as if—this gamble, I may still have a chance at winning.”

And like that, Zōken suddenly finished speaking, retreating a few steps to distance himself from him.

“Perhaps adding one more lock on you is not a bad idea. Ah Kariya, since things have come to this point I will pass on to you the ‘trump card’ I have secreted away for this day, come on—“

Ku, Zōken’s crutch suddenly pushed at the hollow of Kariya’s throat, forcing him to open his mouth. Immediately after, it moved upward like a mouse, and was fiercely stabbed into Kariya’s mouth.

Kariya fainted from the pain. The worms followed the cavity of his mouth and mercilessly invaded his gullet, finally arriving within the spasming abdomen. Now, even if he had wanted to vomit, he could not; it was already too late.

After which—as if a red-hot block of metal had been placed into his stomach, an intense burning sensation grilled Kariya’s body from the inside.

Kariya began to struggle in agony; the cuffs on his hands jangled. The blood which seemed to have stagnated now boiled, runaway, and his heart also pounded crazily, almost to the point of breaking apart.

That had been a piece of concentrated prana. The Crest Worms within Kariya’s body, which had temporarily regained vitality, began to move again. The mock prana circuits of Kariya’s entire body also started to pulse like never before, and his limbs were beginning to feel pain as if they were being torn apart—but this also meant that Kariya’s numb arms and legs could feel again.

"Huhuhuhu, this does have immediate results.

Do you know? That piece of prana you swallowed just now came from a Lust Worm. The one that first absorbed Sakura’s innocence. How about that, Kariya? The vitality of a young girl, absorbed continuously over the course of this past year—it is the best magecraft energy of all, yes?"

And perhaps it was this chain of cruel actions that satisfied his sadistic heart; the elderly magus turned around, his face full of smiles. Just as he was about to leisurely leave the worm storage, his derisive mockeries once again pierced into Kariya’s ears.

"Go forth and fight, Kariya. Burn up completely the life snatched from Sakura. Do not be stingy with your blood and flesh, but bring back the Grail! If one like you can do it, that is."

After which, with the heavy closing of the doors, the surroundings were once again only filled with icy darkness and the noise of crawling worms.