The twin black eyes that stared at him from his chest level were like a pair of jewels.

Yes – that was the truth; Tōsaka Tokiomi once again felt it himself. This girl is the ultimate treasure that the Tōsaka family obtained after five generations, a rare shining gem that equates to a miracle.

Although she was yet young, she was destined to become a beauty in the future judging by her looks. Rather than her mother’s appearances, Rin had more similarities with Tokiomi’s mother when she was young.

The time was dusk; the veil of night has yet to fall.

Arriving at his wife’s house, Tokiomi, in front of the doors of the Zenjō house, did not plan to step inside. Right now, Tokiomi was one of the Masters who seek the Grail, and had long entered the realm of Shuras. In order to protect his wife and daughter, he had entrusted them to the Zenjōs. This realm does not allow blood or gore to invade.

With a nervous expression, Rin gazed at her father, who had called her out of the door but didn’t speak a word. Her father didn’t just come to see her, but arrived with something very important. Instinctively, the girl understood it this way.

He had originally decided not to see his daughter until the end of the war. What made him waver was Father Risei’s sudden death last night.

The old priest was his father’s good friend and watched Tokiomi grow up. Under the secret pact sealed between the two parties, he was there to support Tokiomi’s back. For Tokiomi, this was the biggest factor that made him have a sure confidence in winning.

Of course, Tokiomi isn’t someone who would be at a loss once he loses his backup. However, it is an indisputable fact that a dark cloud named “unforeseen” had appeared on the road to victory that he had believed wholeheartedly in till now.

Just like how that experienced and stubborn priest had suddenly fell – his own confidence had also suddenly been cut in half.

Till yesterday, the victory of the Heaven’s Feel had appeared to Tokiomi as something already in the bag. However, due to the death of his trustworthy companion, at this time he had also made the preparation to devote himself in the gunpowder-covered battlefield as a fighter.

What if… this is the last time he talked to Rin?

Faced with the young girl before him, what should he say?

Rin swallowed, staring at her father, and waited for him to speak to her.

Tokiomi knew the respect and longing his daughter had towards him, who is her father.

He knew that what he said to his daughter today would definitely decide Rin’s road from now on.

No – there were no doubts for the future; it has all been decided long ago. Rin has no choice but to inherit the title of the sixth head of the Tōsaka family.

Perhaps it was because of this thought that Tokiomi now bore a little bit of guilt towards his daughter.

He knelt down, and put his hand on Rin’s head – at that time, Rin suddenly widened her eyes with surprise.

It was normal for Rin to be shocked, too. Tokiomi also discovered, for the first time, that he didn’t even know just how he should express his gentleness to his daughter.

“Rin… put the Association in your debt by the time you mature. I’ll let you decide what to do after that. You should be able to take care of yourself.”

He originally had some doubts and didn’t know what to say; but once he opened his mouth, he began to speak on and on.

He had thought of many ‘maybes’; there were many things to be passed on. How to manage the treasures – that is, jewels – in the house, and the rules of the basement workshop that was inherited from the Great Teacher – all such things, Tokiomi focused on key points and recounted to Rin, who was intently listening.

Although there were no Crests, but in truth, it was equal to having Rin appointed as the head of the Tōsaka house for the next generation.

On a side note.

Compared with the members of the Tōsakas through the generations, his talents are mediocre at best.

The reason that the Tokiomi right now is a skilled and respected magus was largely due to the fact that he had always loyally obeyed the family creed.

That was why he could always be confident and elegant –

If he wanted to achieve a ten-fold result, then he must give out twenty-fold of practice. Elegantly and composedly pass all sorts of cruel training; that had become Tokiomi’s creed. If one has to find something about him that’s better than others, then maybe it would only come down to the two things of complete self-control and a will of self-restraint.

His father, who was both his teacher and the previous head of the household, should already have fully foreseen just what a hard journey his son would embark upon if the son had the way of magecraft as his ambition. Therefore, when his forebear passed the Magic Crest onto Tokiomi, he had repeatedly asked his son – ‘will you inherit the family business?’

These questions are merely very ritualistic, and it’s only for a show too. As the only son, what Tokiomi had been taught since childhood was an education of how to become a leader. This pride that was nurtured since his childhood made him have no other dreams in his life.

Even so – this method of ‘asking’ was still used; that is, Tokiomi still has an incomplete ‘ability to choose’.

Now that he thought back, for Tokiomi, this was the best gift that his father gave him as the previous head of the family.

Tōsaka Tokiomi decided to enter the way of magecraft through his own will, and decided not to be swayed by fate.

It was indeed this preparation that gave Tokiomi an iron will. What supported him through the days of merciless, strict practices ever since then was indeed this proud overconfidence of ‘this is the way of life I chose for myself’.

If only he would be able to pass the treasure that he got from his father onto his daughter – Tokiomi thought sadly.

However, that was already impossible to be achieved.

For Rin and Sakura, there were no choices for them in the first place.

One of them has all elements, having five multiple elements as her alignment. The other has no elemental alignments, having Imaginary Numbers only. Both sisters have a rare potential that can be equated to miracles. This had surpassed the limits of so-called natural talents or inborn skill; it is almost like a curse.

A magical nature would equally gather magical powers to it. Prominent people who are far outside the rules inevitably ‘gather’ equally extraordinary experiences. This can not be controlled by the person’s own will. There is only one way to deal with this kind of a destiny – consciously walk away from the rules yourself.

Apart from understanding and practicing the way of magecraft themselves, there are no other ways to deal with the magical powers hidden in the blood of Tokiomi’s daughters. Moreover, the protection of the Tōsaka house can only be endowed on one of them. This fact tormented Tokiomi for a long time. The one who did not become the inheritor would get mired in all kinds of odd evens due to her own blood, and trouble bound find her. If the Association found this kind of ‘ordinary humans’, those guys would definitely gladly put her in formaldehyde as a specimen in the name of ‘protection’.

Precisely because of that, it was nothing better than a godsend for the Matō house to hope to have Sakura as their adopted daughter. He had obtained the way to have both his beloved daughters inherit first-class magecraft, unconstrained by their bloodline’s consequence, and carve out their own lives. At that time, Tokiomi could be said to be freed from the heavy burden of being a father.

But can it really be achieved? – Tokiomi didn’t even have that confidence. This question continued to torment him.

With Rin’s talents, she should find it to be easier to understand the mysteries of the way of magecraft than Tokiomi.

Therefore, compared with embarking on this road through a choice of his own will, what a painful thing it would be if she tries to escape her destiny but still ends up on this path at the end.

If he is unable to give any guidance on the trials that Rin will face and just disappear like this – would such a Tōsaka Tokiomi count as a fitting father?

As if questioning the confusion in his heart, Tokiomi once again condensed all his thoughts into the hand he had put on Rin’s head.

Rin let his large hand caress her head, but her jet-black eyes remained gazing, unmoving, at her father. There was not a sliver of anxiety or doubt in that look.

This unconditional reverence and trust finally brought answers for Tokiomi.

There was no need to apologize to this child, nor worry about her future path. Faced with the proud child of the Tōsaka family, the previous generation, who was about to pass away, no longer needs to entrust anything else. 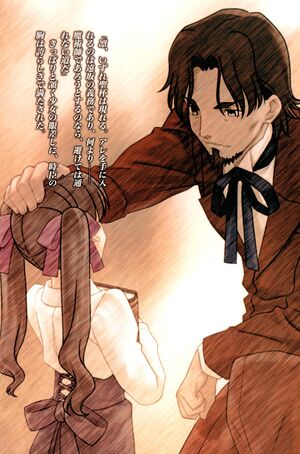 “Rin, the Holy Grail will appear eventually. It is our duty as the Tōsaka family to win it. More importantly – if you want to be a magus, you can’t avoid it.” The girl nodded adamantly. Her eyes made pride fill Tokiomi’s chest.

“Rin, the Holy Grail will appear eventually. It is our duty as the Tōsaka family to win it. More importantly – if you want to be a magus, you can’t avoid it.”

Tokiomi did not feel this kind of pride even when he inherited the position as the head of the family.

“I’ll have to get going now. You know what to do now, right?”

Rin answered resolutely with a clear voice. Tokiomi nodded and stood up.

Lifting his head, he cast one look inside the house and happened to catch the eyes of Aoi, who was standing by the window and peering out.

Trust and encouragement was in his eyes.

And thankfulness and reassurance was in her eyes that responded to him.

Just like that, Tokiomi turned his back on his wife and daughter, and left the Zenjō house without a backward glance.

Confusion is a shadow created from a restless heart. That is far from elegance.

Remember the family creed in your heart; Rin’s sight told him that once again.

If he still had regrets towards his daughter, then – it must be his failure and the self that cannot fulfill his long-cherished wish through the Holy Grail.

If he wants to become a father that can lift his head up high and proudly puff out his chest in front of Rin, then Tōsaka Tokiomi must become a perfect and flawless magus.

Only then – can he complete the magecraft art of the Tōsaka family with his own two hands.

He must become a father who’s fit to teach and guide his daughter, a truly perfect father.

With a brand-new decisiveness, Tōsaka Tokiomi embarked on his return journey in the dusk.

Once again towards Fuyuki.

Soon, the veil of the night would descend.