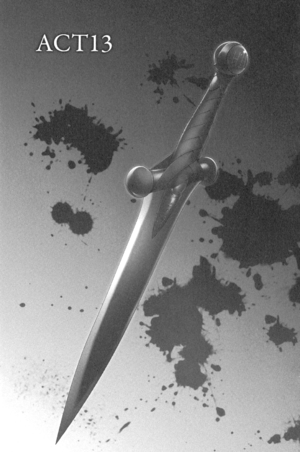 It was not yet morning. Kotomine Kirei was already waiting at the door of the Tōsaka mansion.

He had not come to this place since summoning Archer ten days ago. This was the Western-style mansion he had spent his time in as an apprentice magus three years ago, the one place in Fuyuki he felt closer to than even the church.

"Welcome, Kirei. I’ve been waiting for you."

Though a guest had arrived at an unusual hour, Tōsaka Tokiomi appeared quickly at the door after hearing the doorbell. Perhaps he had not slept at all since leaving the Fuyuki Church the previous night. Kirei bowed deeply to Tokiomi in the manner of a disciple to his master.

"There are some things I wish to tell you before I leave Fuyuki, and then I must bid you farewell."

"So it has come to this... and on such short notice. To part with you in such a manner—I have my regrets as well."

Tokiomi spoke these words, but there was no trace of guilt on his face. That was to be expected. Tokiomi understood that Kotomine Kirei was but a pawn the Tōsaka family had borrowed from the Holy Church.

To Kirei, the Heaven’s Feel would yield no reward, being a mandatory task assigned by unseen powers from above. Kirei’s parting from Tokiomi was not a rejection or a betrayal, but a release from duty. Coming to say farewell was purely an act of formality.

"At dawn I will board a plane and head for Italy. First, I must hand my father’s possessions over to headquarters. I may not be able to return to Japan for some time."

Kirei contained the feelings in his heart and stepped once again through the Tōsakas’ front door.

"The more I think about your leaving, the more reluctant I feel. Whatever may happen, I hope you can succeed your father Risei’s last behest and continue to assist the Tōsaka family in fulfilling a wish we have always desired..."

Tokiomi was now the Tōsaka residence's only occupant, but the guest room was nevertheless spotlessly maintained. Perhaps some low-level familiar under his control had been cleaning so as to maintain composure even in this time of intense war. When it came to Tokiomi, no less was expected.

“Though it is a pity your actions against the Einsbern family failed, I understand that you had good intentions. Perhaps this is the way that Executors work, but I hope you will duly inform me of the situation before and after you act in the future. Then I can be prepared.”

"To have given you, my teacher, this much trouble at the last moment... I am truly ashamed."

Kirei raised his head, seeing the sincerity in Tokiomi’s eyes, and said to himself.

"It is true that we met only because of the Heaven's Feel, but no matter what the circumstances, I am very proud to have had you as a disciple."

Hearing this, Kirei momentarily lost control of his emotions and laughed out loud. But Tokiomi, completely misunderstanding his disciple's intentions, continued to speak in earnest.

"Talent is not something to be taken by force of will, but your sincere attitude towards training as one who walks this path is something that even I, your teacher, am very much impressed with. Kirei, from this day on you can continue to fight for the best interests of the Tōsaka family as your father did before you. What do you say?"

"I could not wish for more."

Kirei smiled slightly and nodded. Tokiomi, who for the past three years had constantly misunderstood his disciple's character and inner world, now also misunderstood the meaning of Kirei’s smile. And so he continued to speak even more happily.

"You allow me to rest assured. I wish for my daughter to learn from you. After this Heaven's Feel ends, Kirei, you shall be Rin’s master, and guide her as such."

Then Tokiomi retrieved a letter that had previously been placed at a corner of the desk and passed it to Kirei.

"Though it is written rather simply, it can perhaps be considered a will of sorts."

"If—and the chances are very small but a possibility nonetheless—if something unexpected happens to me, then I have written here that the Tōsaka household shall be inherited by Rin and you will be her guardian until she is mature. Pass this letter to the Clock Tower, and all further procedures will naturally be taken care of by the Association."

This time, Kirei did not stop at perfunctory verbal assent but sincerely accepted the responsibility that Tokiomi had entrusted him with from his heart. After all, Kirei was of the priesthood. It was his duty to fulfill the responsibilities entrusted to him with honesty and reliability.

"Please trust me. Even though your disciple’s abilities are limited, I will make every effort to take up the responsibility of caring for your daughter."

Though the words were brief, they contained a deep gratitude. Next, Tokiomi picked up the thin, long black box that had been beside the letter and handed it to Kirei.

"Open it and see. This is my personal gift to you."

Kirei opened the box. On the velvet-lined interior neatly lay an exquisite dagger.

"The Azoth dagger. It has been meticulously crafted from heirloom jewels. After it is filled with prana, it can be used as a Mystic Code. You have learned and practiced the ways of the Tōsaka magecraft; use this as the proof of your graduation."

Kirei held the dagger in his hand and examined it carefully. His gaze fell upon the sharp knife-edge and for a long time did not move away.

Kirei’s face, devoid of expression, must have seemed full of gratitude from Tokiomi's perspective.

"My benefactor... I will truly never be able to repay your great care or live up to your expectations."

"To me, you are the best reward, Kotomine Kirei. With this, I can set forth for the final, decisive battle with no regrets."

Tokiomi said with a clear smile, then got up from the sofa.

Kirei believed that moment to be an arrangement of fate.

If one were to say that it had been a mere congregation of coincidences, then how could it have been that Tōsaka Tokiomi chose precisely that time and place to provide Kotomine Kirei with that dagger in the form of a gift? Was it all not an indication of inevitability?

"I am truly sorry to have delayed you for so long. Will you still be in time for your flight—"

—Now Tokiomi was facing the direction of the guestroom exit, completely defenseless with his back to Kirei. Could this be a coincidence as well?

"No, you do not need to worry, teacher."

—Or could it be said that this was inevitable, that this was fate? That no matter how much he could have prayed or hoped, everything would have eventually been drawn toward the abyss of betrayal?

Kirei began to laugh loudly, a laugh more cheerful than ever.

"There was never been a flight to begin with."

Not even Kirei himself knew he could laugh so heartily. Moreover, the dagger in his hand struck toward the defenseless back in front of him,.

The Azoth dagger that had been a proof of love and trust slipped between ribs to directly pierce Tokiomi’s heart. This one strike by an Executor who had experienced countless battles could be said to be deathly precise. There was no intention of murder, and there was no sign of it. Perhaps even Tokiomi, who had been stabbed, could not understand the significance of this wave of pain in his chest for a brief moment.

Tokiomi staggered forward. Turning his head, he saw only Kirei, smiling brightly, his hands stained with fresh blood—but there was never the slightest indication of understanding in Tokiomi’s eyes even till the end. With only a dazed expression, devoid of anger, he collapsed onto the carpet.

To his final moment, this magus must have stubbornly believed his own understanding to be accurate and refused to accept the real truth. Unerringly believing in the path he had chosen, moving forward without the slightest hesitation every time — what a man, to not wake to the truth even after having fallen into an endless abyss.

A condescending expression seeped out of those red pupils. Archer nudged the corpse of his former Master with the tip of his foot.

"I was anticipating he would make a last retaliation before death. Look at his expression. Completely at a loss. He was not aware of his own stupidity even till the end."

"That was because his Servant was in spirit form at his side. It was not illogical for him to let his guard down."

"Already, you have learned to make jokes? Kirei, your progress is truly great."

"You really have no qualms about this, Gilgamesh, King of Heroes?"

"Only until I grow tired of you. Once you cease to be interesting, you will meet the same fate as this carcass lying here. If there is anyone here who should be coming to a realization, it is you by right."

The reply was extremely sharp, but Kirei showed no sign of wavering and nodded.

Indeed, he could not entrust his life to such a dangerous character. It could be said that this was a deal with the devil. A domineering and violent Servant with neither morality nor loyalty, whose interests were difficult to judge.

But—precisely because of this, they were a perfect match.

Those at the pinnacle of morality had not brought Kirei the real answer; it was actually this Heroic Spirit, who was completely at odds with morality, who could become the goal for which Kirei would fight from now on.

Kirei rolled up one sleeve, revealing the Command Seals on his arm, and chanted solemnly.

"Let thy body rest under my dominion, let my fate rest in thy blade. If thou submittest to the call of the Holy Grail, and if thou wilt obey this mind, this reason, then thou shalt respond—"

"I so swear. Thy offering shalt be my flesh and blood. Kotomine Kirei, my new Master."

The prana supply opened the moment the contract was completed. The Command Seals on his left hand, functional once again, glowed anew, accompanied by a burst of pain.

The pact was ended; and so the strongest, most wicked team involved in the fight for the Holy Grail—here, under conditions unknown to all others—was born.

"So shall we begin, Kirei? ... You shall command and draw open the curtains to this farce. As your meager prize, I will grant you the Grail."

"No problem. King of Heroes, you will certainly also draw pleasure from this. Before you find the answer you anticipate, enjoy the jubilation of this battle to your heart’s content."

The gazes from the red pupils filled with a delighted light and black pupils immersed in gratitude intertwined with each other.