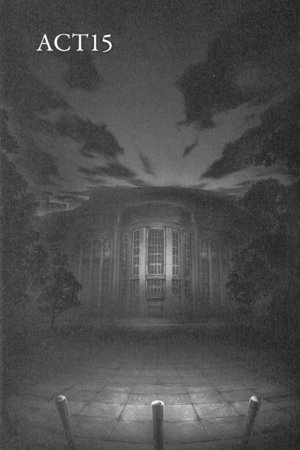 The sky was already brightening by the time Waver Velvet returned to the MacKenzie house in Miyama.

He had walked for hours on the night footpath. He wouldn’t have managed to make it back to town had he not met a taxi on the way. It had been a stroke of luck that an empty taxi was in such a remote location, but he didn't know if he should feel thankful or angry. Fortune should have graced them when Rider and Waver were in their fiercest moment of battle. He could only feel sad at this untimely luck.

Waver let out a long sigh at his prolonged night march when he got out of the taxi. Suddenly, he heard someone call out to him.

The voice was coming from above his head.

He lifted his head. Old man Glen, the patriarch of the family that Waver had assumed was sound asleep, was sitting on the rooftop of the second story and was waving at Waver as he stood at the door.

“Grandpa? You… what are you doing?”

“Alright, alright. Come on up. I’ve got something to say to you.”

“Something to say to me? Then… why are you on the roof?”

“You won't find a view like this anywhere else. There's no better place than this to be bathed in the light of the early dawn.”

This kind of strange behavior was enough to make people wonder if he was going senile. To be honest, Waver didn’t feel like humoring the old man. He had returned with a tired, shuffling gait after having suffered through the chilly night air; all he wanted right now was to tuck into bed as soon as possible and let his exhausted body have some rest.

“Grandpa… can it wait till morning?”

Although his tone was placid, old man Glen was quite adamant.

“Kid, you better get up there. That old man seems to really want to say something to you.”

A rough voice that only Waver could hear said this above his shoulder. Rider had finally promised to conserve his prana and remained in spiritual form on his return journey after his fight with Saber.

“I’ll keep an eye out on the surroundings. Don’t worry.”

“It’s not a matter of whether I’m worried…”

Waver wanted to rebuke, but immediately hushed himself. Old men Glen couldn’t see a Servant in spiritual form. If Waver spoke, it would look like he was muttering to himself oddly.

“No one cares about what I think…”

At this stage, with the War of the Holy Grail almost at its end, he had to force himself to provide company for this useless old man. Waver couldn’t help but feel resentful. However, it would only drag this on for longer if he started to argue. Even if he didn’t agree to it, he still didn’t know how to respond if he was asked why he was returning in the early hours of the morning. In the end, Waver could only walk towards the roof, where the old man was at.

The MacKenzie house differed from the other houses in one way: its roof had an attic and a skylight. It was easy to climb up to the roof through the skylight if one used the ladder that stretched towards the rooftop attic from the second-story stairway. It had not been made that way by accident. Rather, the house had been been designed to enable easy access to the rooftop when from construction. It was easy to get onto the roof if one got used to it.

Although it was easy to get up to the roof, he had to endure the frosty winter dawn. Waver, having gotten up from the skylight, shivered in the northern wind. With absolutely nothing around to break the wind, the chill at this height was incomparable to what it had been on ground level.

“Sit. Here, I prepared some coffee. Drinking it will heat you up.”

Old man Glen said loudly as he poured the steaming liquid out of the thermal flask and into the mug. He was wearing a down coat and had a few blankets wrapped around him. It seemed the old man had made thorough preparations for the cold. Waver couldn’t think of a reason for the old man to do this.

“Grandpa… how long have you been sitting here?”

“I woke up when the sky was getting bright, and I discovered you were still not back. Moreover, you can look at the spring constellations at this time of the year. So I wanted to look at the sky while I waited for my grandson’s return…”

Waver didn’t reply when he heard those drunken and almost senile words, just drinking his coffee nonchalantly. Glen had thought of getting up specifically to look at constellations; did all old men have such leisurely thoughts?

“What’s wrong, Waver? Didn’t you like this spot a lot when you were young? You watched the stars with me many times. Do you still remember that?”

Waver gazed out at the scene beneath him as he perfunctorily brushed off these past events that he had no memories of.

The entirety of Fuyuki city, from Miyama to the sea, could be seen from the rooftop since the house was grounded at the side of the hill. The air was fresh and crisp while the dawn dyed the sea with a shade of pearly pink, and he could even detect with his eyes the shadow of sails sailing away to distant lands.

It was the entire view of the battlefield for Waver. He had no leisure in his heart to appreciate such beauty.

“I first set foot on this land because of a business trip… Martha asked for two things when I discussed the decision to leave our bones on the land of Fuyuki with her. One was that the house was to be built on the hill of Miyama, and the other was that there had to be a skylight that allowed us to go on the roof… However, Chris still couldn’t forget Toronto. He just didn’t want to be brought up a Japanese.”

Glen’s gaze, immersed in memory, looked toward the other side of the ocean, his homeland where his departed son resided.

“You could say that. But if that was ultimately the reason why I fought with my son and separated with him… then honestly, I regret it…”

The old man let out a sigh as he recalled those years of loneliness.

“I’ve always dreamed of sitting on the roof and watching the stars with my grandson just like this, though I expect it will never happen.”

There was an obvious incongruity in that reminiscence, accompanied with a bitter smile. That made Waver pause.

As if mocking him, old man Glen silently shook his head and said.

“My real grandson never came to the roof with me. Martha is also afraid of heights. I’d always been alone when I watched the stars…”

What injured Waver more than the awkwardness and the sense of crisis was the feeling of humiliation.

The subliminal suggestion was removed – moreover, it was by this gentle old man with no training in magecraft.

“Hmm, who are you? It doesn’t matter. It’s incredible that Martha and I actually believed you were our grandson. But even after living for so long, I've found that some incredible things in this world remain incredible no matter how hard you think about them… Your usual behavior was gentler than our grandson's, anyways.”

Waver asked in a small voice. Old man Glen said with a complex but calm expression.

“As for that, of course I’m angry. However, Martha is always smiling happily now; that used to be impossible. I need to thank you for that."

“Also, it seemed you didn’t enter our house with ill intent. Straightforward youths like you and that man Alex are so hard to find nowadays. As to why you deceived us… I couldn’t understand it even if I wanted to.”

Waver came to the conclusion that this old man was completely defenseless and extremely dense. Even the lab rats in the Clock Tower were smarter than him.

Why didn’t he hate Waver? Why didn’t he blame Waver? For Waver, who only knew the small world of the Mage's Association, the old man’s leniency was something he couldn’t comprehend.

“Or maybe I can ask you to stay only because I don’t know anything about you… If possible, I hope we can keep this relationship for a while longer. Myself aside, Martha probably didn’t feel anything unusual. It doesn’t matter if it was a dream. The times we spent with our kind grandson have been our hard-sought treasure.”

Waver couldn’t bring himself to look at the old man. He lowered his eyes and looked at his hands.

It was a pair of hands that would one day create great mysteries. He had such talent – even if others refuted him, at the very least he could firmly believe in that possibility within himself.

But what did reality say?

He couldn't even carry out a hypnotic hint, the most basic art amongst basics, to an outstanding degree. It wasn’t a matter of luck or an accident. Those excuses were useless. His magecraft didn’t even maintain a satisfactory result when faced with this kind old man who begged him to deceive them a while longer.

Had he been that man, he could have obtained his goal while laughing and holding a goblet in his hand.

Not only did Waver Velvet’s magecraft fail to achieve such a result, he had been indebted to another’s gentleness in return.

There was a sense of absurdity on top of regret – yes, he was only a clown.

Staring into the empty sky, Waver became oblivious to his surroundings and sank into contemplation. Now he fully understood the mindsets of those in the Clock Tower who had laughed at him. Waver was laughing at his own stupidity with those people.

Although he thought as such, he couldn’t actually laugh. Glen and Martha MacKenzie weren’t expecting a comedy.

They were making a sincere request to Waver in their own way. Now that he thought about it, this was the first time that he wasn’t the subject of ridicule.

“… I’m sorry, I can’t promise you that. I can’t even promise I can safely return here next time.”

“So you and Alex are doing something that endangers your lives?”

Saber’s Noble Phantasm and its cold light flashed before his eyes. That had happened half a day ago. Waver would not forget the abyss of death he saw then any time soon.

Old man Glen was silent for a while as if in thought, then he gave a heavy nod.

“I don’t know how important that thing is to you… but I do hope you will listen to me say this. You’ll realize that there’s nothing more important than life itself when you look back after having lived through most of it.”

This logic was in contrary to the reason for which Waver gambled his youth.

The so-called way of magecraft could only begin once the practitioner became prepared to die – the ultimate state could only be achieved by burning away one’s life. That was the direction he had labored towards until this day.

However, if one were to search for a way of existence that fits oneself, then perhaps the words said by this peaceful old man would prove to be the truth.

With a sense of loss that left him speechless, Waver stared at the dawn.

Little did he know that he was greeting the final day of the fourth War of the Holy Grail.