In the silence, a repulsive odor of burning assailed his nostrils; it seemed that a fire had broken out somewhere in this large edifice.

Unhurried, Emiya Kiritsugu’s steps were light and decisive as he slowly walked to the center of the empty porch.

He moderately relaxed the muscles of his entire body, not using excessive strength to any area. On the other hand, his nerves reflected the entire situation of the surrounding area, like a mirror more quiet and clear than the surface of a lake sealed in ice, more sensitive than hearing, more distinct than vision, with no blind spots. He had transformed himself into a probe that could instantly sense any slight movement as he strolled through the darkness.

Considering this outcome, the ambush that Kiritsugu had planned had truly been an utter failure. But he felt no regret whatsoever, as he had finally been able to ascertain the true colors of Kotomine Kirei, the enigmatic adversary; this was still considered a large gain. Precisely because Kiritsugu’s many predictions had come to nothing, he had gotten the answer through the process of elimination.

To sum it up, that man had no interest whatsoever in the Grail.

Under ordinary circumstances, all the Masters would battle for the sake of pursuing the Grail. This idea had taken root as a lasting first impression; it had blinded Kiritsugu’s eyes all this time, until today. This was precisely why Kiritsugu had felt uncertainty and a lack of understanding toward Kotomine Kirei’s actions — which had had nothing to do with the Grail.

But tonight, Kiritsugu had clearly seen Kirei’s strategy for the ceremony for the Grail’s descent and discovered that he had been fundamentally wrong.

In using the Fuyuki Municipal Hall as the sacrificial altar, Kirei’s preparation had really not been thorough. This fragile fortress was already lacking as a magecraft stronghold, but he did not take any defensive measures. Even if time had been pressing, he should at least have set up basic traps and protective screens. Furthermore, if there had truly been no time to prepare, then why would he have done something like summoning the other Servants to come forth for a decisive battle? Even taking a hundred steps back, even if he really did know absolutely nothing about defensive magecraft, then why would he choose the one leyline out of the four that was most unsuitable for a defensive battle?

On thinking this, Kiritsugu could only believe — to Kotomine Kirei, the descent of the Grail was of secondary importance. That man had picked the Fuyuki Municipal Hall solely because the chances of being ambushed there were lowest. In comparison to a successful descent of the Grail, he hoped more to gain the most advantageous initiative in the final decisive battle between Masters.

Kotomine Kirei’s goal was not the Grail, but the bloodshed involved in the process of obtaining it. The reason for that could not be investigated, nor did it need investigation. It was enough to have understood who exactly the Executor’s target was.

Kiritsugu slowly gripped the Thompson Contender; feeling the touch of walnut wood under his fingers, he thought of the face he had only ever seen in a photograph.

At this point, even if he tried to pinpoint how and where his path had crossed with that of Kotomine Kirei, it was only a hollow attempt. Kiritsugu’s life had not sailed so smoothly as for him to assert that he had never made an enemy of someone. That he was an outsider who had gatecrashed the Heaven’s Feel solely due to a personal feud with Kiritsugu — this possibility could only be eliminated due to reasons of probability. Though there was only a very small chance that an outsider could have lasted to the very end of the Heaven’s Feel, as well as directed a farce that had changed the direction in which the Grail had progressed—the reality was before his eyes, and Kiritsugu could only accept it as the truth.

Emiya Kiritsugu had never sought the truth nor answer to things. To him, only the ‘situation’ had ever been worthy of concern.

He had merely vowed in his heart that he would save more people. There was no distinction between the lives that were saved. The balance that measured sacrifice and salvation had nothing to do with reason or circumstance. Thus was his existence. He would certainly not be foolish enough to inquire as to the significance of his actions.

Therefore — in Kiritsugu’s heart, none whatsoever remained of the fear and sense of crisis that he had previously felt towards Kotomine Kirei.

From the starting point of knowing what his motives were, that man had fallen to become a simple obstacle that hindered Kiritsugu’s progress. No matter how strong an enemy the other was, as long as Kiritsugu was sure that it was someone he must challenge, that person was no longer one for which he would feel anything. There was no fear, no hatred, neither underestimation nor compassion; he considered only one thing: elimination. That was the only function that Kiritsugu gave himself as a killing machine.

The large auditorium that comprised the first to third floor could be said to be the key area of Fuyuki Municipal Hall. Kirei placed the corpse of the dead homunculus on the stage - which, having been completely renovated, was waiting only for the first performance.

In its soft abdominal cavity, a foreign object could definitely be felt. It was likely that the Grail that had been mixed in with the organs was now regaining its original form. Though Kirei could now cut open the abdominal cavity and remove it, he was not anxious to do so. When one more Servant’s soul was reclaimed, the outer covering should automatically collapse and reveal the Grail. He had only to wait.

Archer was confronting Rider at the bridge; Berserker was blocking Saber at the underground parking garage. Everything was running smoothly. Now there was no one to disturb Kirei.

He left the auditorium and arrived at the corridor. Instantly, the black smoke that suffused the air assailed his nostrils. The origin of the fire should be the underground battlefield. From the density of the smell, the fire had already spread to the different areas of the structure. But all the wire connections to the outside, including the fire alarm, had already been cut off; as long as the fire did not spread outside the structure, it would not be discovered by the nearby residents.

With every step he took, his mood became more passionate; the holy words of benediction could not help but spill from his lips.

“He restores my soul. He guides me in paths of righteousness for his name’s sake. Even though I walk through the valley of the shadow of death, I will fear no evil, for you are with me—“

He was here. Now he was sure to meet with him.

Emiya Kiritsugu was nearby. Just as Kirei desired his arrival, so did he search for Kirei.

The flames had dispersed the darkness, flickering and dancing in various areas of the corridor. Warm air caressed Kirei’s face, but he did not care. The tide of blood that roiled in his heart burned even hotter than the flames.

Now, Kirei felt blessed for the first time. The God who had never blessed him before in his life had finally given him a revelation.

What he pursued was this catharsis of hatred, this joy of the fight.

“— Your rod and your staff, they comfort me. You prepare a table before me in the presence of my enemies. You anoint my head with oil; my cup overflows. Surely goodness and love will follow me all the days of my life—“

The tongues of flame followed the walls up to the ceiling, turning into signposts showing the way to Hell in invitation to the two men.

They advanced silently, high-spiritedly, without hesitation, toward the place of the decisive battle.

Thus, they met one level below ground - the storage space for large props directly beneath the stage.

At the other end which roiled with black smoke, Emiya Kiritsugu saw the slender figure clothed in vestments.

At the other end which roiled with hot air, Kotomine Kirei saw the black overcoat of his mortal enemy.

The radiance of the Black Keys in his hand reflected the brightness of the barrel of the magecraft gun.

They both perceived the killing intent; they had long come to realize that blazing sensation.

So there was no further need for words for communication.

They finally looked directly upon each other with their own eyes; they came to the same conclusion at the same time. 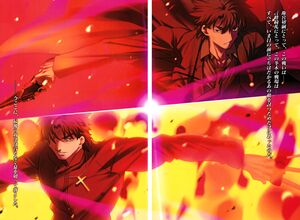 To Emiya Kiritsugu, this war was— To Kotomine Kirei, the entire battlefield of Fuyuki was— Everything of everything existed for the sake of bringing down the enemy before them. At this moment and in this place, the curtains opened soundlessly upon the final showdown.

Seven Masters. Seven Servants. All that was merely what could be called the ‘situation’.

To Emiya Kiritsugu, this war was—

To Kotomine Kirei, the entire battlefield of Fuyuki was—

Everything of everything existed for the sake of bringing down the enemy before them.

Within the raging flames, the blades were moving.

Three in his left, three in his right, the Executor pulled out a total of six Black Keys and sprinted forth.

The sight of the assassin’s gun trained on the shadow that closed in with the wind.

At this moment and in this place, the curtains opened soundlessly upon the final showdown.