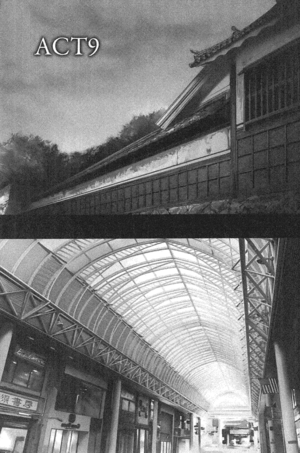 And a tragic scene to go with it.

It had been thoroughly ruined, to the point where one could not begin to tell what the perpetrator had intended to destroy. It was as though a storm had raged through and wrecked the workshop, leaving nothing to remind a viewer of its former appearance.

This was no storm, of course, but deliberate destruction. After all, how could a storm wash over this place, in an underground water tank? The carnage wrought on Caster’s workshop could only have been caused by the power of an anti-army or perhaps an anti-fortress Noble Phantasm.

Uryū Ryūnosuke could do nothing more than weep and wail in despair as he looked upon the scene of this tragedy. An onlooker might have been moved to sympathy upon seeing his pitiful, agonized form… that is, if they knew nothing of him.

Ryūnosuke and Caster had been busy hunting down fresh meat the whole of last night. But when they returned to their workshop, flushed with joy, they were greeted by this scene of utter devastation.

“The art pieces we worked so hard to create… it’s too much! How can humans do this kind of thing?!”

Ryūnosuke’s shoulders shook as he sobbed. Caster gently gathered him into his comforting embrace.

“Ryūnosuke, you still haven’t seen the true evil lurking in the hearts of men, so your grief is understandable… what you need to realize is that only a small amount of people can truly comprehend beauty and harmony. The others, the rest of the rabble, will only react with bestial jealousy when they are exposed to sacred artwork. To them, beautiful things are nothing more than targets to be destroyed."

Naturally, Caster was also furious at the destruction of his sanctum. However, he had no choice but to swallow his anger and calmly accept the situation. After all, he had once been the general of a nation’s armies. His battle intuitions told him that it would be dangerous to directly confront an enemy who could destroy all the demons he had posted as sentries and wreck his workshop so thoroughly.

That Ryūnosuke had not remained in the workshop last night was also a blessing of sorts. With that in mind, Caster’s rage slowly mellowed.

“You need to know that our creations will often be destroyed by these rabble… because of that, we cannot be overly sentimental toward our art pieces. Everything we make will inevitably be destroyed. Thus, as creators, we should take joy in the act of creation.”

“You mean… it doesn’t matter if what we make is destroyed, because we can always create again?”

“Exactly! Ryūnosuke, that sharp understanding of yours is definitely the best thing about you!”

Hearing that, Ryūnosuke brushed the tears from the corner of his eyes as Caster laughed heartily. He sighed deeply as he looked around his surroundings.

“Is this God’s punishment because we pursued our happiness too much?” he mumbled.

Caster’s attitude suddenly changed as he heard Ryūnosuke’s words. He firmly gripped Ryūnosuke’s shoulders, turning him so they were face to face. A sharp glint flickered in his eyes as he looked at Ryūnosuke’s expression.

“I’ll only say this once, Ryunosuke… God does not punish humans. God only plays with humans.”

Bluebeard’s eyes burned with emotion, but his face was blank. It was almost as though he was a different person, compared to the tense mood he had had earlier.

“Once upon a time, I committed blackest sacrilege, the most vile, the most foul thing a man could ever do. Ryūnosuke, the sins you have commited are nothing more than child’s play in comparison. But no matter how many I killed, no matter how sinful I became, no punishment from God descended on me. By the time I had noticed, I had walked down the road to Hell for eight years. The harrowing screams and the mournful wails of thousands of children were lost in the nihilistic darkness!” 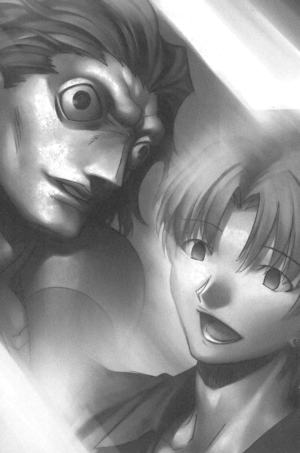 “In the end I was not eliminated by God, but by men who had endless desires, like me. The Church and King decided that I was guilty, captured and executed me. But all they wanted was my wealth and my land; they simply drew me into a trap to make those things their own. That was not punishment for my sins! That was nothing more than blatant robbery!”

At that moment, Ryūnosuke realized that he’d struck a nerve in this monster – but Uryū Ryūnosuke did not feel fear. Instead, he felt a loneliness and anguish that seemed to have no end. Compared to his prior glibness, the current expression on Caster’s face, as though he had lost everything important to him, made Ryūnosuke acutely aware of the sorrow that this great madman concealed in the depths of his heart.

“But Sir, even so… God still exists, right?”

Listening to Ryūnosuke’s soft murmur, Caster couldn’t help but hold his breath and carefully examine the expression of his common yet strangely noble Master.

“…why, Ryūnosuke? You have no religion and know nothing of miracles. Why would you think so?”

”Because it seemed as though this world was a boring place, so I kept searching. But the more I looked, the more interesting and unusual things I found.”

Ryūnosuke opened his arms as he spoke, as though he were embracing everything in the world.

“I’ve thought about this for a long time. This world is full of so many pleasures. It’s far too much luxury for an individual. If we simply change the way we look at things, we’ll discover that there are endless foreshadowings in here. In the search for true happiness, there must be no greater excitement than defeating the world. Somebody must be writing this, the world’s script. Someone must be writing this long novel with almost five billion characters… perhaps, this author is what we call God.”

Caster blinked silently, staring blankly into the emptiness as though he were contemplating Ryūnosuke’s words. After a while, he once again looked at his Master, and asked in a low, solemn voice.

“- then, Ryūnosuke, do you honestly think that God loves men?”

The serial killer answered cheerfully, “Of course. It’s a love from the depths of his heart. A God who is able to keep writing this world’s script for tens of thousands of years without stopping must love men very much. Hmm… I think God must be doing His best with His writing, while being immersed in the joy of creating His work at the same time. He is touched by the love and courage in His work, shedding tears at the sad parts, and also shocked and terrified by the horror and despair within…”

Ryūnosuke paused, as though to review what he’d already said, and then he continued.

“God enjoys the courage and hope of mankind, but he also likes the sorrow and despair of bloodshed. Otherwise… the hymn of life would lack its vivid color. Therefore, Sir, this world must be full of God’s love.”

Like a devoted believer praying before a holy painting, Caster listened to Ryūnosuke’s words with quiet solemnity. Then, he slowly lifted his head, his expression one of happiness.

“In this modern day, the people have already lost their faith and the governments have abandoned God’s creed. Once, I thought this was a world near destruction… but I am thoroughly impressed that new followers like yourself still appear at times like this. Oh Ryūnosuke, my Master!”

“Ah, no, no, I’ll be embarrassed if you say things like this.”

Although he didn’t know why, at least he knew Caster was complimenting him. Ryūnosuke coyly deflected it.

“However – from your religious perspective, my sins are tiny in comparison.”

“It is the nature of first-class entertainers to take on unpleasant chores to earn smiles, right? Sir, God will surely reward your merciless acts by joyfully returning those fools to us.”

“Be it sacrilege or praise! For you, does it all seem to be the worship of God? Ah, Ryūnosuke, your thoughts are truly deep and philosophical. That God, who plays with the countless humans in the world is nothing more than a toy himself – I see! Then even this bad joke can be understood.”

After laughing for a while, Caster’s eyes once more bore that forlorn look, the same look a man, madly devoted to his art, would have just before reaching his frenzied climax.

“Very well. Then let us use despair and vividly-colored tears to dye this divine temple a splendid shade. I will let those in Heaven know that they are not the only ones who know what is true entertainment.”

“Do you have any brilliant ideas again, Sir?”

Ryūnosuke looked expectantly at Bluebeard, who seemed more excited than he had ever been in his life.

“Since it’s been decided, then let’s have a celebration. Ryūnosuke, today’s feast is going to be a bit special; it’s to raise the curtains on the new religion you proposed.”

“Understood. I’ll do all I can to make it as COOL as possible!”

That night, Ryūnosuke and Caster had ‘harvested’ five children. These children, brought to this unknown, lightless place, were huddled against each other, shivering as they watched the crazed performance unfold before them.

In the face of these two crazed worshippers’ new religion, the souls of these innocent children would not see even a sliver of salvation’s light.