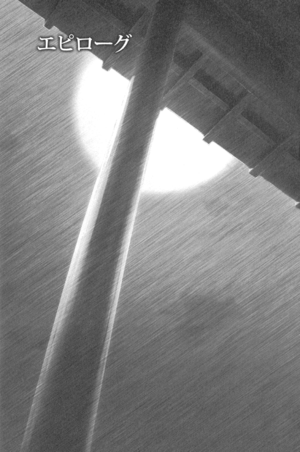 Every news channel on TV was reporting on the large fire that had taken place in Shinto last night.

But even apart from that, there was still a gloom cast over today's breakfast at the MacKenzies’.

The table seemed rather empty with one less person. The male guest who had been boarding in the house for some time had left for his home country the previous day due to some urgent issue. He had asked Waver to thank the MacKenzies for their hospitality and care in recent days, and apologized very much for not bidding them farewell in the face of his sudden departure.

“Alex-san must have safely returned to the UK, right?”

Martha MacKenzie murmured with a worried look. Waver nodded calm her down.

“He called me back from the airport this morning. That guy, doesn’t he know anything about local time differences?”

Waver told this massive lie with a poker face. He himself, however, was quite astonished that he could lie as easily and simply as that.

“He called you back? I really didn’t notice. Ah, but that kind of style really suits him.”

With a nod and a smile on her face, Martha turned her gaze back to the TV screen and then she looked gloomy again.

“… That’s still quite unfortunate, but then again, there have indeed been a lot of disturbances lately. But maybe that’s not a bad thing either. At least those insincere visitors might change their itinerary now.”

Looking at the screen and the totally burned and barren field it showed, Waver could not help but feel deeply ashamed.

The fire that had occurred close to the Municipal Hall was undoubtedly caused by the War of the Holy Grail. Although he did not know which one out of the three remaining Masters and Servants had created this tragic scene, he and Rider might have prevented this incident had they been present. That was why he found it difficult to suppress his deep regret.

This tragedy would not occur in the future. Though ended in the worst way possible, the alien events that threatened Fuyuki would not occur again. The fourth War of the Holy Grail, which had sacrificed countless innocent lives, had been put to a complete end last night.

Remembering all of the tragedy that had happened back there – he felt that it could already be considered a miracle that he was still alive.

“Umm, Grandpa, Grandma, may I discuss something with you?”

Hearing Waver’s voice, which sounded different from usual, the old couple placed their coffee cups down.

“Ah, actually… I want to take a break from school for a while. This is a decision I made after discussing it with father back in Toronto. Rather than going to school, at this time I’d like to do something else first.”

Hearing this surprising declaration from their grandson, the old couple couldn’t help but stare at each other and at him.

“But why all of a sudden… You don’t hate going to school, right?”

“No, not at all… It is just that so far, I haven’t had any interest in anything at all besides studying, which makes me kind of regretful. So… Ah, I want to travel. I want to visit the outside world, so I can understand more things before I decide on what to do with my life.”

Martha seemed to be very glad, and smiled while clapping her hands together.

“Did you hear that, Glen? Waver-chan actually said something that sounds like what Alex-san would say.”

Hearing this evaluation, with some relief and a bit of a lonely pang, Waver smiled bitterly.

“Anyway, there’s a lot of things you should prepare beforehand. It’s vital to do your homework first. Do you want to start by finding a job? … Ah, but here’s a problem. You can’t get a job in Fuyuki if you can’t speak Japanese, right?”

Hmm... Glen crossed his arms in front of his chest and looked deep in thought.

“There are also a lot of foreigners in this town. If I beg some of my acquaintances, maybe they can find you a solution.”

“So Waver, will you stay in Japan for a while?”

Looking at Martha, who was wearing such a happy expression, Waver nodded.

Martha was so happy that she almost jumped with joy, and could not resist clapping as she replied. Her husband, Glen, just sat in silence next to her, but gave Waver a look of trust and expectation. The boy also sat up with his back straight and returned a solemn look.

Waver returned to his room alone, and reviewed this room which was bathed in the light of the dawn.

Eleven days— it was such a short time, but this room was already dyed with the color of the person who had lived there.

There were old magazines, paper dinner bags that he had thrown everywhere, and an empty whiskey bottle that had rolled into the corner.

They were all traces of the other person who had eaten and drunk and rested in this room. This was a color that did not belong to Waver.

Was he a ghost? Or a familiar? Thinking of all that nonsense, Waver wondered. This was not a joke. If it was just a ‘soul’, how was it possible that such a vivid ‘color’ still lingered in the room?

However, this room would be no longer be dyed by this ‘color’.

From now on, there would be only one person living here, and that was Waver. It would only be stained with Waver’s personality and his presence. The previous color would eventually be erased. It was inevitable.

Although it felt regrettable and lonely, one certainty was that the color repainting the room must be extraordinarily vivid. Only so could it cover the color of ‘that person’, which was brighter than anyone else’s.

Waver sat down on the bed and pulled out the collector’s edition of The Iliad from his backpack.

It had only been eleven short days, but the pages were already getting dark with repeated readings. The face of that eternally smiling man seemed to emerge before him again when he looked at this book, which he felt difficult to understand no matter how many times he read it. That man who had pushed himself forward with the adventures of the hero Achilles, who had challenged his own limits and finally made his own life into a legend.

And such a man had once been at Waver’s side, and had lived and fought with him.

Those dream-like scenes that he had described to Waver felt almost like lies. However, in the end, Waver was still attracted to his happiness—

He could not deny that he envied him. He had even thought of going together with him.

But he had left Waver behind after all. He made that decision the moment he invited Waver to become his subordinate and received Waver’s reply. Did that man make a wrong decision because of Waver’s wrong reply back then?

“Why are you talking about nonsense like ‘subordinate’! Are we not friends? If you’re going to battle, of course I’ll accompany you!”

Then that man would definitely have smiled knowingly, and perhaps would have allowed Waver to mount his war horse in the end.

“But… The important thing is that in the end, I never showed him my ‘unwillingness’…”

Waver couldn’t help but sigh. He was still far from standing on equal terms with that man. His own weaknesses were still all exposed at the end. He regretted, and he thought it a pity. Perhaps he was just too proud.

But he wasn’t anxious. After all, Waver hadn’t yet reached the age at which that man had begun his journey, and the marks of that man’s blood-boiling and amazing adventures could still be seen in every corner of this world. Waver would go and find all of that. Perhaps, one day, he would find the footprints of that man in some place beyond that far-distant sea.

Suddenly, Waver’s eyes landed on the paper bag beside the television.

Come to think of it, that guy had bought this stuff with joy, but had left without even taking it out of its packaging.

Waver opened the bag and removed the gaming console and the disk within. He had even bought a joystick. Feeling his eyes suddenly become hot with tears, Waver forced them down.

“… I will not play this silly stuff.”

But he had just decided to try new things, and one was right in front of him. Although it was silly, the idea was worth a try.

Yet, was this kind of stuff really that interesting?

Waver frowned as he looked at the bag. He then began following the instructions to connect the video game with the TV.