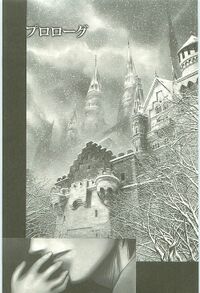 Let us tell the story of a certain man.

The tale of a man who, more than anyone else, believed in his ideals, and was driven to despair by them.

The dream of that man was pure.

His wish was for everyone in this world to be happy; that was all that he asked for.

It is a childish ideal that all young boys grow attached to at least once, one that they abandon once they grow accustomed to the mercilessness of reality.

Any happiness requires a sacrifice, something all children learn when they become adults.

But, that man was different.

Maybe he was just the most foolish of all. Maybe he was broken somewhere. Or maybe, he might have been of the kind we call ‘Saints’, entrusted with God’s will. One that common people cannot understand.

He knew that for any existence in this world, the only two alternatives are sacrifice, or salvation…

After understanding that, he would never be able to empty the scale plates…

From that day on, he set his mind to work on being the one to tip the scale.

To abate the grief in this world, there was no other, more efficient way.

Therefore, rather than saving people for the sake of saving them, he excelled at the art of killing people.

Again and again, he kept painting his hands the colour of blood, but the man never flinched.

Never questioning the righteousness of his acts, nor ever doubting his goal, he forced himself to only faultlessly tip the scale.

Never ever misjudging the value of a life.

But unfortunately, he realized that too late.

To value everything in equal fairness, that would be the same as not loving anyone uniquely.

Had he carved that inviolable rule into his spirit sooner, he would have attained salvation.

Freezing his young heart into necrosis, achieving his self as a measuring machine with neither blood nor tears, he kept on leading a life of sorting those that were to die, and those that were to live. There probably wasn’t any suffering for him.

But that man was wrong.

Anyone’s delighted smile would fill his chest with pride, and anyone’s wailing voice would shake his heart.

Anger was added to his resentment, and he became full of regrets as his tears of loneliness longed for hands reaching out to him.

Even though he was pursuing an ideal beyond reason of the world of men — he too, was human.

How many times was the man punished for that contradiction?

Even when putting that one beloved life, and the countless number of perfect strangers, on the left and right of the scale—

He definitely never made a mistake.

More than loving someone, to judge that life equally to that of the others, he had to value it impartially, and impartially forfeit it.

Even when he was with someone precious to him, he would always seem to be mourning.

And now, the man is being inflicted with the greatest punishment.

Outside the window, a snow storm has frozen everything. A mid-winter night is congealing the ground of a forest.

The room is in an old castle built on frozen soil, but it is protected by a gentle flame burning in the fireplace.

In the warmth of that shelter, the man was holding one new existence in his arms.

It was a really small one — a body so tiny, it could be ephemeral, and no weight that could tell it was ready.

Even a delicate response can be dangerous, as with the first snow scooped by hand, which would crumble with a mere jolt.

In frail eagerness, the child preserves her body temperature by sleeping, breathing leniently. That is all that the modest throbbing of the chest can do at the moment.

As he lifts the baby in his arms, the mother, resting her body on the couch, smiles upon them.

From the haggard look of the child, she isn’t fine yet, and her complexion isn’t perfect, but even so, her beautiful face reminiscent of a jewel doesn’t decline in any way.

Above all, the color of bliss brightens her smile and erases the exhaustion that should have worn out her gentle look.

“She would always be difficult and cry, even with the nurses she should have gotten accustomed to. It’s the first time she’s let herself be held so quietly… She understands, doesn’t she? That it is fine because you are a good man.”

Without answering, dumbfounded, the man compares the mother on the bed with the child in his arms. Had Irisviel’s smile ever looked that dazzling?

She originally was a woman of little happiness. Nobody would have thought of giving her that feeling called happiness. She wasn’t a creation of Gods, she was created at the hands of men… As a homunculus, such a treatment was normal for that woman. Irisviel had never had any wish.

Created as a puppet, brought up as a puppet, maybe she never even understood the meaning of happiness to begin with.

And now — she is beaming.

“I’m really glad I had this child.”

“From now on, she will be first and foremost an imitation of a human. It may be tough, and she might hate the mother who gave her such a painful life. But, despite that, I am happy. This child is lovely; she is splendid.”

Her appearance is nothing unusual, and, looking at her, she is a lovely baby, yet —

While inside the mother’s womb, a number of magical treatments were conducted on the unborn body to rearrange it so that, even more than her mother, she was different from humans. Although it was born, its usefulness was restricted, so that it would be a body that is a mere cluster of magic circuits. This is the true nature of Irisviel’s beloved daughter.

Despite such a cruel birth, Irisviel still said, “Fine.” Giving birth to such a thing, being born as such a thing, she loves this existence, finds pride in it, and smiles.

The reason for that strength, that bracing heart, was that she was, without a doubt, a “Mother”.

The girl who could only be a puppet found love and became a woman, and found an unswayable strength as a mother. That must have had the look of a “happiness” that nobody could invade. Right then, the bedroom of the mother and child protected by the warmth of the fireplace was indifferent to all despair and sorrow.

But — the man knew better. That to the world he was part of, the snowstorm outside the window was the most appropriate.

By firing one single word, the man’s chest felt like it was pierced through by a blade. That blade was the peaceful, sleeping face of the baby and the dazzling smile of the mother.

“I will be, someday, the plight that will kill you.”

As he felt like vomiting blood, Irisviel nodded with a peaceful expression to his declaration.

“I understand. Of course. That is the earnest wish of the Einzberns. That is what I am for.”

That was the future that was already decided.

After 6 years had passed, the man took his wife to her dying place. As the one victim to save the world, Irisviel had become the sacrifice devoted to his ideal.

That was a matter that had been discussed several times between the two, and on which they had come to an agreement.

The man had already cried his heart out at that decision, cursed himself for it, and each time, Irisviel had forgiven him, and encouraged him.

“I know your ideals, and I grew attached to your prayers; that is why I am here now. You guided me. You gave me a life that wasn’t that of a puppet.”

For the same ideal, she sacrificed herself. She had become a part of him like that. So was the shape that took the love of the woman Irisviel. Because it was her, the man was able to permit it.

“You don’t need to grieve over me. I am already a part of you. Enduring only the pain of your own sundering is enough.”

The infant’s body was light as a feather, yet a weight of a different dimension made the man’s legs shiver.

He couldn’t understand yet, nor was he prepared for, what he would inevitably do when placing that child against the ideal he carried.

Don’t judge or forgive such a man’s way of life. There isn’t the power for that yet.

But, even with such a pure life, his ideal is merciless.

The man squeezed out his voice, despite having his sweetness likely to be crushed in insanity.

One tear drop fell on the plump, cherry colored cheek of the baby in his arms.

Sobbing silently, the man bent on one knee.

To overthrow the heartlessness in the world, he aspired to a greater heartlessness… And yet, to the man who still had people he loved, that was finally being inflicted the greatest punishment.

His most loved one in this world.

Even if it meant the ruin of the world, he wanted to protect that.

But, the man understood. The time would come when the justice he believed in would demand the sacrifice of such a clean life — what kind of decision would this man, Emiya Kiritsugu, make?

Kiritsugu cried, scared of that day that might come, frightened by that one in a thousand chance.

Holding his chest tighter in the warmth of his arms, Irisviel raised her upper body from the bed and gently placed her hand on the shoulder of her husband who burst into tears.

“Never forget. Wasn’t it your dream? A world where nobody would need to cry like that. Eight more years… And your battle will be over. We will carry out this ideal. I’m sure the grail will save you.”

His wife, fully understanding his agony, caught Kiritsugu’s tears as kindly as possible.

“After that day, you must hold that child, Ilyasviel, once more. Stick out your chest as a normal father.”