Gekka no Utahime to Magi no Ou 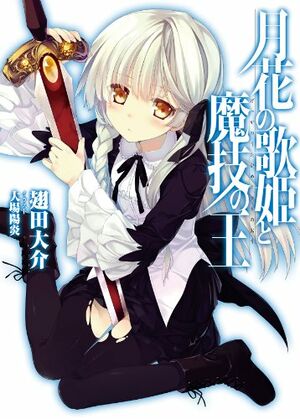 Gekka no Utahime to Magi no Ou, or The Moonflower Songstress and the King of Magi (月花の歌姫と魔技の王) is a light novel series written by Haneda Daisuke. The illustrations are done by Ooba Kagerou. Currently, the series has 4 volumes published (November 2013).

What kind of future awaits the boy who holds two powers that can change the world?

A technological revolution was brought about by The Last Witch, to the world of magic, with the introduction of 'science'. Lyle, a boy wielding the powers of both magic and science, was caught between his childhood friend, the noblewoman Maria who was pressing forward into an era of science, and Lunaria, a girl of the Phantasm race, a symbol of the age of magic.

Two different girls, from two different eras and ages. Which will the boy bearing the power to change the world choose?

Gekka no Utahime to Magi no Ou series is also available in the following languages:

This is a hosted project. Rights are solely owned by Florza

All translations are to be in British English.

The format used is the CAMBRIDGE UNIVERSITY PRESS style, except for the fact that the words are in British English, as mentioned above.

All links below are external links to NanoDesu