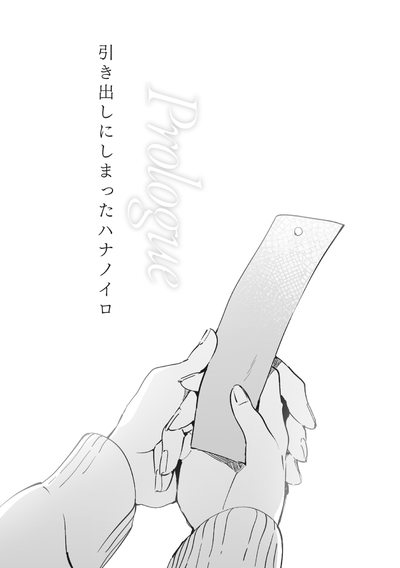 This is the story I (watashi) created, of that 'wish' (till now) he knew not of.

This is the story of 'hope' (henceforth) she knew not of that was given to me (boku), reaching out to a certain Spring.

I (watashi) was returning from school.

My destination was a certain little park, a shortcut leading home, but I was stopped in my tracks just outside of it.

Yes, I reached the little park, wanting to take the shortcut, only to stop there.

There was a really pretty person there sitting on a really dirty bench. I had never seen such a pretty person. She had a closed book on her knees, with a pink bookmark placed on the cover, instead of between the pages.

I guess the world, or God Himself even, might have been really familiar with her beauty.

The sunlight was so gentle, that it was hard to imagine there being a snowstorm mere days ago. It filled the world with its blessings, and the scenery was picturesque.

If possible, I want to keep looking, so I thought.

Driven by that impulse, I tugged hard at the straps of the large red backpack, and took a deep breath. Giving myself silent encouragement, I changed directions and cautiously approached the sitting beauty, like I was approaching a newly-discovered kitten. Finally, I sat next to her.

She glanced at me, but quickly looked into the distance again, scratching her head as she lifted it up towards the sky, bluer than yesterday.

Despite that, it'll be a while until Spring arrives, and the sakura trees by the side were still naked.

So what is with this sweet sakura fragrance floating around? I wondered.

I kept looking at her.

The outline of her straightened throat.

The silhouette of her slightly raised chin.

And the eyes reflecting the blue sky.

Now that I could admire her from up close, there was another level of sparkle to her beauty.

Her long hair was really fluffy, her eyebrows a little raised. Her face looked happy, satisfied, delighted, but...

She seemed a little sad.

I approached her probably because of that imperceptible sadness. Even though the scene appeared so perfect... No, it because of that apparent perfection that I noticed the flaw.

I called out to her, and it startled her enough to jolt her shoulders. She turned her head towards me, pointed her finger at her pretty face, and widened her eyes. She looked really cute. Well, it was probably rude to think of someone older than me as cute. Couldn’t help it when this was my first thought, though.

Our chat started with the most unnecessary topic.

“Your long hair is really pretty."

“Isn't it troublesome to leave it that long?"

“Very. But I never thought of cutting it."

“Because this is something I'm proud of. The passing of time, the thoughts I had, it was the best proof of me falling in love."

I think mama once said that before, that every year, the hair grows by 15cm.

Time couldn’t be seen, but here it was moving gently next to her in a tangible way. How long was her hair right now?

“Have you fallen in love before, sis?"

“Yep. The happiest love in this whole world."

I looked up at her, trying to digest the meaning of the words 'happiest love in this whole world'. What was that? Something really sweet?

It brought up a thought.

I fumbled around my pocket until my fingertips touched something hard. Great. I still had two left.

I took out a bite-sized chocolate from my pocket and handed it to her. I wanted to have it as a snack later but it wasn’t like I couldn’t give it to her. Because today...

“I feel energized when I get sweets. Don’t you, big sister?"

“Then, please have some."

I ate one of the two chocolates and left the other next to her. Though a little hesitant, she finally took it.

I saw her put the little chocolate between her red lips, and told her, “I heard that it's Valentine's Day today, a day for friends. It's a day to give chocolate to important people."

Saying that made me feel a bit embarrassed, and I hurriedly looked away.

My eyes ended up looking at the park’s playground. There was a swing and a slide. Nobody was around, and it felt lonely, like the whole world had forgotten about this place. I figured that being able to see the big sister in a corner of my vision was a comfort of sorts.

But she rolled the chocolate in her mouth, and wasn't able to speak.

I was the only one talking.

“I wanted to give chocolate to Tai-chan and Kai-kun. Have you given any to anyone, big sister?"

“Well, everyone's happy. I'll be really happy if you cheer up too, big sister."

Hearing those words, she touched her cheeks with her hand as if checking something.

Her fingertips found no dampness.

Her feet rocked back and forth, like a swing.

There seemed to be more sadness in her expression now. However, her face looked much happier than before. I wondered why that was?

“The promise reached him, and his echoing voice is still catching me in turn, not letting go."

Once she said that, a light gust of wind blew through the trees, shaking the branches. It was a little cold still as it was barely past Winter time. The golden light of Spring glittered in the corner of my eyes.

In that moment, the pink bookmark escaped her hands and flew into the sky.

It disappeared in the light, looking like a sakura petal.

We exclaimed in unison, standing up, reaching with our hands after it. However, it ended up just evading her palm, and gently landing in mine. It was an ordinary piece of paper, blank on both sides. However, I could tell that she really treasured it and had held onto it for a really long time. Her characteristic sakura fragrance had completely soaked into the surface.

She stared at it, and shook her head.

“Keep it. As thanks for the chocolate."

“But without this, you won't know where you stopped reading at."

“Ah... See, it's not really a bookmark..." her words trailed off, and she started muttering to herself.

Soon after, she told me what it really was. She kept it with the book, so I thought it was a bookmark, but now that she explained, it really was more like 'that'. Even though there was nothing woven through it leaving just a hole at the top.

It was something used to make wishes to the stars.

“Yep. My wish has been fulfilled."

“What did you wish for, big sister?"

“I, no, the two of us... We shouted the same wish at the last moment, towards each other. Like Vega and Altair in the sea of dazzling stars. 'Come see me', 'call my name', things like that. That is, —"

She paused, took a deep breath, and lifted her head.

Then, she smiled very happily.

“The proof of great love."

Somehow, the sadness disappeared from her face. Did the sweetness of the chocolate melt away her sadness? Did she recall something happy, so happy that it surpasses the sadness and despair? I would never know.

There's one thing I do know, though.

I have never met a person with such a pretty smile again in my entire life.

I nearly burst into tears, starting to panic. My nose felt itchy, the world's starting to twist around. I wasn't sad, nor in despair. It's not painful.

It was like... like she just brought all the happiness in the world into her hands when she smiled, filling my heart, causing it to be oh so warm.

“So if you make a wish in the future, and find something you really want, you can try writing on it. It'll definitely reach the sparkling stars, just like mine did."

If that was the case, could I smile as happily as she just had?

I was in the midst of doing my own homework, and opened the drawer, wanting to get my eraser. There's a photo of me together with my friends, the test script when I got my first full marks, the great luck charm I drew at the shrine, the glass ball in the ramune, and various other memories inside the desk.

However, what attracted my attention was a faint sakura fragrance coming from a pink slip of paper.

It resembled a bookmark, but actually, it was used to write wishes.

It was something I picked up at a nearby park a long time ago. Right now, I was completely different from that girl back then, I did have a wish I wanted to fulfill no matter what. I thought about it now. I was lost. In the end, I never got down to chasing after that wish.

So this pink fragment of spring, which had been delivered to me by the cold breeze of dying winter, had remained completely blank inside my drawer.

And so it would remain, until the time I would encounter the day when I would be able to write that wish down.