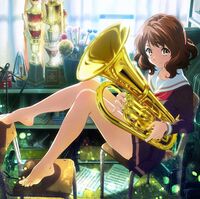 This project has been licensed by Yen Press. The first volume is scheduled to be published in June 2017.

With cover illustrations by Asada Nikki (アサダニッキ), Hibike! Euphonium is published by Takarajimasha under their Takarajimasha Bunko label.

Kitauji High School Concert Band used to be a strong band and had even made it to the Nationals, but since the change in adviser, they had not even advanced to the Kansai Regionals. However, under the strict instruction of the newly appointed Taki Noboru, the students acquired strength steadily. Faced with daily ups and downs, with students competing for the solo spots or students quitting to prioritize studies over club activities, the day for the Prefectures has finally arrived ---. An entertainment novel that depicts the growth in emotional and mental states of young maidens.

It's okay to get serious right.

A touching story of 'sound' that depicts concert band girls' growth in emotional and mental states, which could not be acquired from classes alone! Let all the sounds become one now ---.

You can tell us what you think of the series by polling and discussing it here.