Special Chapter 2: What You and I Prayed For When Our Childhoods Ended - My Wish[edit]

“Hikaru’s too indecent! I hate him!”

Hikaru, who was in his 3rd year of elementary school, weakly called out.

“You made Aoi angry again?”

His cousin Asai came into the kids room, tagging out Aoi as she said coldly.

Asai and Aoi were 4th years, a year older than he, and the trio would often play together.

Recently, Aoi had begun to say things like, “You’re a playboy, Hikaru,” or, “You’re happier with other girls, right?” more often than she had before. She would glare at him through teary eyes, her cheeks puffed out. This was cute enough for Hikaru to wish he could bring her home.

“Miss Aoi asked me who’s in my group for the school trip, and I just answered ‘Erika, Fumiyo, Yuna, Minami, Shiori,’ that’s all.”

Even though Hikaru didn’t understand the situation, Asai questioned him.

“Don’t you have any boys in your group, Hikaru?”

“Well, the boys hate me. None of them are willing to bring me along. My classmate Fujiwara told me today ‘Don’t you dare to be arrogant; you were born out of wedlock.’ Erika scolded them a lot to help me, but the class broke into a huge argument between the boys and girls.

“—Hikaru, ignore those boys and do homework with us. You can form a group with us for the trip.”

Ever since he was in kindergarten, the girls were the ones who had been helping him, protecting him, lending him textbooks when he forgot. Every girl was extremely gentle, and he felt as relieved as being in a flower field when he was with them. He really liked them all, but he wanted to play with boys too.

However, when he forgot his textbook, the boys would look away when he ask them for help, and would deliberately make things difficult for him by telling him ‘go borrow from the girls’.

“Hey, Asa, I really want to get along well with the boys and make friends with them. Erika keep saying things like “I want to be your bride, Hikaru” or “I want to be his girlfriend”, but this and being friends are two different things...what kind of people are willing to be my friends?”

The older, wiser, and calmer cousin went silent for a while, and then said without holding back.

“The one fatal flaw you have is that you’re too obedient to your desires, Hikaru, and I might say that it’s because you’re too much of a playboy. You should get a friend who’s prudent.”

“What does prudent person means?”

“It means a wise person who thinks sensibly before acting and thinking.”

Hikaru looked over at Asai with a clear expression.

Though her expression was aloof, Asai’s shoulders jerked slightly.

“That’s because you’re the smartest and most reliable one amongst all I know, Asa. You taught Miss Aoi and I lots of things.”

Hikaru lowered his eyebrows, and Asai said with a firm, cold expression.

“Boys and girls can’t be friends. Even if they’re temporary, it’s just appears to be, and can’t be real. It’s a fragile friendship that will soon break. That’s why you have to make friends with boys.”

“It means easily broken, like the icicles on the roof in winter.”

“Is that so...fragile...I can’t be friends with girls, is it? It’s a little unfortunate.”

Hikaru looked utterly devastated. He thought that he managed

Asai remained speechless as she looked back at Hikaru.

But Hikaru immediately shook his head, smiled and looked back at Asai.

“No, I think it’s good that you’re a girl after all, Asa. I get it! Asa! I’ll try my best to think of a way to make friends with boys.”

“...That’s good. If you play with boys instead of girls, you probably won’t make Aoi angry.”

And then, she said curtly,

“Aoi’s still waiting downstairs, probably wondering what to do. Go find her.”

Hikaru ran out of the children’s room with a cheerful expression, and dashed down the stairs.

Just like what Asai said, the white ribbon could be seen from the corner of the staircase.

He grabbed Aoi by the hands as she tried to run away, and smiled, saying,

“Wait for me. If I can make a male friend, you won’t go back angrily. And then, we’ll remain close to each other.”

Aoi blushed as she looked around, her lips opening and closing at times,

She answered, seemingly angry and yet troubled.

At night, Hikaru laid on his bed and looked at the stars outside. He made a wish,

“I hope that I can make friends with boys. I’ve been too obedient to my own desire, and it’ll be good if I can make a prudent friend.”

But there was no boy in the class who was like Asa.

It seems that it’ll be difficult to find a prudent friend like what Asa described.

And speaking of which, if I want a prudent person, won’t Asa be enough...

I’ll add another condition then.

“A courageous person will do too.”

That kind of friend must be great too.

He buried his head into the pillow, and closed his eyes delightedly.

It would be great if he could make a real, real friend one of these days.

That person may be from another class.

In that case, once class ends, he’ll run to the friend’s class and shout,

“Hey, I forgot to bring my textbook. Can you please lend me yours—” 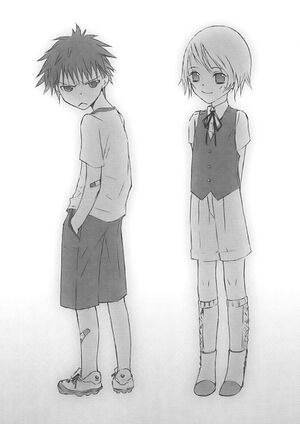