Special Chapter: Shiiko's Ambition - From Now On, I Want to Call You Big Brother![edit]

Shioriko raised her voice as she wiped the dishes Koharu washed with a dry cloth.

"Where? Where's he going to? Did Big Brother Koremitsu say anything."

"I'm not sure. Maybe he has an outing with some friends at school. He did go out at night in uniform before too."

It's worth celebrating if that guy is finally able to make some friends. Koremitsu's aunt, Koharu, said coldly with her lips curled into a frown, her eyes raised just like her nephew.

Shioriko however was unhappy about it.

(Uu, the weather's so good today. I wanted to ask him to bring me out somewhere. If only I had agreed with Koremitsu–since he doesn't have any friends, and is really free, I forgot about it.)

What friends? Probably a girl?

(No, Big Brother Koremitsu isn't the type to be popular with the girls. He looks like a hoodlum, so crude when talking, arrogant in attitude, and he'll say things everyone normally doesn't say without a care.)

At first, Shioriko herself thought that he was such an annoying, frustrating person.

It was really unbelievable that he was actually Hikaru's friend.

But when Shioriko was really feeling lonely, anguished, Koremitsu gave his all to help her.

When Shioriko's only kin, her grandfather died, he took her in as his 'little sister'.

She would never forget the moment when Koremitsu came for her after she was adopted by Kuze.

The Akagis had terrifying looks, whether it was the grandfather Masakaze or the aunt Koharu, and they were brash talkers, but they naturally showed concern for Shioriko. She also got along well with the aloof white cat Lapis, living with the Akagis. Though she had not lived with the Akagis for too long, she really liked this house and the residents in it.

–When I grow up you'll take my virginity in Hikaru's stead.

She whispered at his ear with her back straight. Koremitsu's eyes widened, and panicked.

And so, she was lectured by the grim-looking Koremitsu.

–Such things, as in?

She pretended to play the fool, causing Koremitsu to blush and groan.

If she were to press the issue with him directly, the ever-serious Koremitsu will keep his guard up around her. Thus, she decided to keep the 'promise' in her heart for the time being.

‘Big Brother Koremitsu’, Shioriko had her own reasons for calling him this.

There definitely must have been others who would call him 'Akagi' or 'Koremitsu', but nobody else would probably call him 'big brother'. Because of this, by calling him 'big brother', Shioriko would be a special girl to Koremitsu.

And also, she would have a warm, fuzzy, comfortable feeling whenever she called him then...

Right, even if she were to become his lover, become his bride, at this point, she wanted to enjoy the thrill of being his 'little sister'. In that case, her relationship with Koremitsu will improve.

But Koremitsu had abandoned such a cute little sister by the wayside, and has been looking really busy recently.

Whenever he was in the room alone, he would mutter to himself, sometimes even cupping his head, groaning, or murmuring and blushing. Even when Shioriko really wanted to play with him, and approached him innocently, he would chase her off saying, 'ah, I'm busy now. Wait'

But this time, she clearly had the attitude of 'I must do it today!'.

(If-If he's going out on a date with another girl, I won't forgive him.)

After helping Koharu, Shioriko peeked in on Koremitsu.

Just when Koremitsu was tying his sneaker laces at the door, she approached him from behind with Lapis in her arms, tugged at his shoulder, and looked devastated, saying,

"You're going out again, Big Brother? I thought I could be with you today."

Her eyes were teary.

She was really good at shedding crocodile tears.

Koremitsu in turn looked sheepish as he said, "I'll play with you tomorrow."

"Th-That won't do. I'll be with you the whole day tomorrow, Shiiko. Play around with Lapis for today. Gramps will be happy if you play 5-in-a-row with him."

'Tch'. She thought in her heart, but nodded with a lonely, honest look. In a tactical sense, it was a mistake for her to try and make him stay by fawning at him.

The next conquest would be easier if she were to trigger Koremitsu's guilt here.

(Why must you leave me behind and go out yourself? Big Brother Koremitsu, you big dummy!)

Shioriko was unable to restrain her anger, made a funny face at Koremitsu's back, gritting her teeth, 'ii–' and making such a sound.

And Koremitsu turned back.

When Hikaru was still alive, he would turn his head back at the opportune moment whenever she did a funny face, pointed the middle finger, or raised her lips, and would beam at her as she fluster.

The sight of the golden, transparent hair swayed freely, and the smiling Hikaru overlapped with Koremitsu's body for an instant.

Once that scene vanished, Shioriko found herself exchanging looks with the speechless Koremitsu, and her face sizzled.

Why? Why did he turn his head around like Hikaru? Big Brother's very dull-witted, and he doesn't know anything about a girl's heart!

Why did he suddenly look at me! This is too inconvenient for me!

She even felt a blazing heat deep within her eyes.

Shioriko then turned away and ran to her own room.

Shioriko hid in a corner of the room with Lapis in her arms, flailing her legs around.

As her embrace was too hard, Lapis was unable to bear with it anymore, and escaped.

Right, summer break was about to begin.

In that case, she was to make Koremitsu pay for all he had owed her.

She had a change of mood, placed her favorite grassy green notebook on her knees, opened it, and wrote down her summer plans with a sky blue pen.

Right, this was something she could not omit.

She showed an innocent child-like smile, and wrote large words in the middle of the notebook.

"Go to the pool with Big Brother." 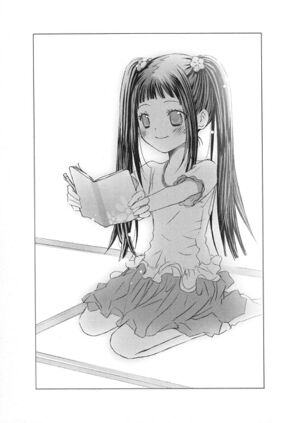