At the ancestral home of Kazuaki's mother, the Udates, there was a shrine dedicated to worshiping Rokujō, the woman who transformed into a spider and devoured her husband and the mistress.

The Udates were terrified of this blood flowing in their body, and were ashamed about it, never revealing it.

Kazuaki too learned of this from the servants in the next door while the latter were whispering to each other.

—The madam herself is a descendant of the spider..

They mentioned that the definite reason why his mother treated his father and the mistress so cruelly was because of the spider blood.

They even said that in the past, a woman called Lady Rokujō was married into the family, and that she transformed into the spider during to envy, devouring her husband and that mistress.

Kazuaki also knew about that shrine.

When he accompanied his mother to the Udate residence, he noticed an ancient shrine behind the greenery, one that was deliberately hidden. He also recalled the crimson flowers swaying in front of the shrine, looking so alluring.

(There is that Rokujō person sealed inside that shrine, if I remember correct?)

Having thought that, Kazuaki was utterly terrified, and even froze there.

How wonderful it is to devour and murder those wretched women! I too wish to be like this Rokujō person, to rid all the wretched, filthy, unreasonable women in this world.

While admiring the existence of women, Kazuaki himself wished to be a woman, and also wanted to eliminate all that he despised—he was trapped in such conflicting emotions within him.

Yes, he wanted to be a beautiful, powerful woman like Rokujō, and punish the flirtatuous, puny women.

Wearing the clothing of one of his Udate relatives, Tsuyako, whom he was betrothed to, Kazuaki snuck outside.

He often visited the Rokujō shrine, and would be utterly mesmerized by the crimson flowers swaying in front of the shrine, his cheeks practically sticking towards them; I bullied that girl today in this manner, that girl too suffered such a punishment, he reported.

There was a gathering at the Udates on that day, and Kazuaki removed the red one-piece skirt from Tsuyako's body, wore it, and put on a black wig. The black wig belonged to his mother, so it looked a little too big for his head, the long hair covering his eyes, swaying with the wind. While enjoying the fluttering sensation of the one-piece skirt, he went to the corner of the garden, where the shrine was.

Over there, he found a frail little girl with large glasses staring at the swaying crimson flowers...

"I heard that those flowers are so red because they suck blood."

Kazuaki went to speak to the girl, and the latter cringed her neck in fear, before turning around.

And once the latter spotted him, she cringed in shock, the eyes behind the glasses filled with fear as she remained rooted.

Kazuaki was intrigued by this timid girl, narrowed his eyes, and continued,

He said that the shrine was decided to a terrifying and powerful woman called Rokujō, who transformed into a spider and devoured her husband and the mistress.

He even mentioned that Rokujō used the power of the spider to mutilate all the filthy women.

The petite, bespectacled girl shivered increasingly, her face paled as she listened to Kazuaki.

And so, while trembling,

"Why did Rokujō eat her husband?"

"To be one with him forever, to obtain that eternal love."

Kazuaki once read from a book the meaning of the word 'eternal'.

It meant something that could continue to live on, even after the ethereal body was lost.

Something that glittered in the sky.

"Only a special woman like Rokujō can obtain eternal love."

The girl widened her eyes, shivering as she watched Kazuaki, and continued to ask timidly,

The crimson flowers swayed with the breeze, and the black hair swayed by Kazuaki in an alluring manner.

At this moment, he felt a powerful force rising within his body. Raising his lips that were covered in red lipsticks, he smiled, and answered,

The reaction of that girl thereafter really delighted him.

She was fidgeting like a turkey, and shrieked. Her eyes could not be any wider, and her face contorted as she ran away in fear.

She tripped over while on the way back, staggered to her feet, and continued to run.

(Ahh, girls really are fools after all. Whose daughter is that anyway? Whatever, I probably will not remember an ugly frail, unimpressive troll like her the next time we meet.)

He giggled as he watched her leave.

"Why am I dreaming of my younger days?"

Kazuaki was dressed in his loose pajamas, his hair ruffled and unkempt, and he began to speak to the caged chameleon placed on the table beside the bed.

"That plain girl broke the legs of her glasses when she turned back to run, and they got stuck to her face. She ran away with all her might, looking so foolish and dimwitted too. Well, Rokujō is a powerful existence after all; it is no wonder that girl got terrified. Little Tsuyako was shocked when I put on girls clothing and became Rokujō herself, staring at me so intently. I say, Third Princess, 'Rokujō' is really such an indomitable, absolute presence. I can be forgiven for whatever I do."

The chameleon Third Princess maintained a stoic facade as it spat its tongue out. She was being so adorable so early in the morning, covered in an alluring jade color. It feasted on the Crickets it liked, catching them effortlessly and devouring them.

Upon seeing that, Kazuaki continued to muttered,

"But for some reason...that man was not terrified of 'Rokujō'. He wanted to be friends with me..."

Rage gradually rose up his forehead, and he pressed it onto the cage.

—I'll be your friend in Hikaru's stead.

That gruff voice was akin to a mongrel's howl, his eyes filled with vigor. Such a scene appeared in Kazuaki's ears and mind, and his body was seething red.

"What a farce that was. That mongrel wants me to be friends with such such a lowly creature. Such a stooge who does not know his place."

With regards to Koremitsu Akagi, the one who paraded himself to be Hikaru's representative, Kazuaki never took heed of him before this.

Kazuaki's face was wrecked because of the incident involving Aoi, and he had a nosebleed. Thereafter, Kazuaki despised him, plotting his vengeance, and for that end, he brought Yū, whom Koremitsu still had feelings for, back to Japan, intending to frame here.

Thanks to Asai and Tojō's interference however, due to some messages, pin holders, gym clothing and so on, the issues Kazuaki paid no heed to came to haunt him, and photos of the evidence and him cross-dressing were uploaded onto the internet. The previous day was the worst day in his life.

At this moment, the Mikados were surely doing their best to delete such photos off the internet. They would also involve the best lawyers possible to deal with the drug issues, so a leniency in judgement would be possible, let alone acquittance.

The vacancy of the Mikados head has nothing to do with Kazuaki at this point. The latter did not wish to take up that position in the first place, and his mother did say that he did not need to be obsessed with standing at the top of the Mikados. What that woman truly desired was something completely different, and Kazuaki was at most a pawn to fulfill her wish.

Perhaps she would be utterly furious that Kazuaki was unable to be of use to her.

Upon imagining his mother being so furious, her teeth gnashed, Kazuaki found it to be laughable, not fazed by the slightest.

(I do feel a lot more relieved that I do not have to take up the troublesome role of being the head of the family.)

He really did have to thank Asai and the rest for being so relieved.

However, he could not accept Koremitsu's request as it was...when Koremitsu grabbed his hand, the reason why Kazuaki never shook it off was because the grip was too firm, and his hand was numb from it...he really disliked those callous, crude brutes that only rely on their physicality and arm strength, and surely he was not something to be easily convinced like that.

—If you dare make another mistake, I'm going to come over no matter where you are and stop you, yelling not to do it.

—The world may quietly accept your insolence, but I definitely won't let it slide!

"...He actually said such disrespectful words to me, the one who will be forgiven for whatever he does...it really is unbelievable. I forgot to grumble about it because I was shocked. Looks like the cells of idiocy has infected. Oh deary me, why is my heart fluttering like this? My face is really burning wildly."

Looking flustered, he placed his forehead on the cage.

And soon after, bashfulness filled his eyes, and he whispered his frustrations,

"Hey, Third Princess...if I am to be in female clothing when we go see the Tulips, will Mr. Akagi hold my hand...?" 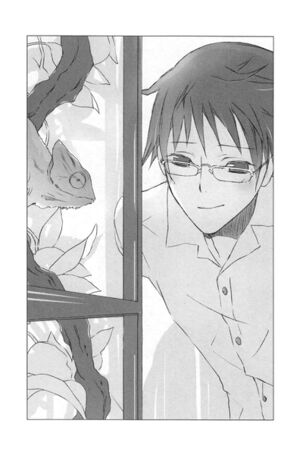