Chapter 11: Misunderstanding and Point of View[edit] 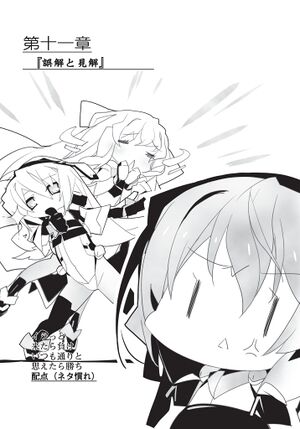 Accept it as normal

Point Allocation (Get Used to It)

In their classroom the following morning, Asama and the others were discussing the news that Mitotsudaira was going to be late after eating too much last night.

“Yeah, the next morning is rough when you eat nothing but meat.”

“She needs to at least get plenty of water.”

“I seem to recall Mito saying something incredible about chicken counting as a drink.”

Toori arrived while they discussed it.

As usual, he was not carrying anything with him, but he took a look around classroom and asked a question.

“She is pooping, Toori-sama,” said Horizon.

“That was a phantom voice, Toori-kun,” said Asama.

“That too was a phantom voice, Toori-kun. And shrine maidens don’t poop.”

“Tomo! Tomo! Are you still half asleep!?” asked Mito. “You’re not making any sense!”

“That was yet another phantom voice, Toori-kun. …Anyway, to move things along, Mito will apparently be along after second period. And shortly after that, she has to leave on that errand Ariadust Academy Principal Sakai gave her. …Oh, come to think of it, you weren’t here for that yesterday, were you? Principal Sakai asked Mito to go down to Totomi and visit the war memorial there.”

“Did he?” He nodded a few times. “That’s a shame. There’s someone I was hoping she could meet.”

“She should be back by the time school lets out.”

“Then I’ll wait till then. Oh, and I want you to meet them too, Asama.”

“Sure, I guess.” Asama nodded, watched him take his seat, and then remembered her own task.

“Toori-kun, one other thing. Have you helped out Mito yet?”

“You mean that thing you mentioned the day before yesterday?”

“Yes.” She raised her eyebrows a bit. “This is a very important issue for her, so you should probably get it done sooner rather than later. Yes.”

She had made a serious mistake last night. Stoically cooking up and eating meat out of stress was a very bad idea for a middle school girl. Worse, she had eaten three whole kilograms of it. Even worse, she had cooked it all the same and used the same sauce for it all. She really wished she had used salt or miso for more variety. She especially wished that now that her entire home smelled of the sauce this morning. Drawn to the kitchen by that smell, she had found the leftover meat sitting out instead of stored in her simple ice room.

What choice do I have but to eat it all now?

So in order to avoid facing reality at the moment, she had eaten even more meat in the morning as something similar to hair of the dog. That was a nice bread breakfast. Because pork is the bread of the meat world.

After filling her stomach, she prepared for the day as usual.

“Mitotsudaira-sama, is that a euphemism for using the bathroom?”

I’ve been hearing a lot of phantom voices recently.

She was running late for school, but she had already notified them. She decided to not act ashamed and boldly arrived at school just when second period was ending.

A short break had begun, so she would have time to greet everyone before leaving on Principal Sakai’s errand. And if possible, she wanted to invite him along with her.

She knew courage was what mattered here, but she also wanted to have a righteous purpose for that courage.

She had to ask her king about the divine mail that led to her meat bender last night. If not for that, she could have avoided that one-girl meat party.

But she also felt like her werewolf side made her bolder when she had just eaten a bunch, so she could ask her king what she needed to ask him. Or she felt like she could. She at least felt like it. Maybe it is only just a feeling…

She psyched herself up and slid open the classroom door.

She put on as big a smile as she could muster and spoke as cheerfully as she could manage. Immediately she heard the sound of the sliding door crash into its frame and the entire wooden classroom shook.

Oh, no, she realized.

Slamming the door open with a smile makes me look like I’m brimming with hidden anger.

Adele used her shortness to view the others without having to duck down.

“Um, that sounded bad. I mean, did she hear what we were saying?”

“Yeah, we were getting a little carried away with the Mito-tsan poop jokes,” said Naito.

“In my defense, I think it’s wrong to discuss those things behind someone’s back.”

“We’d just say the same things in front of her, so does it really matter?”

There was something wrong with them since she could only agree with that.

“This just means we need to prepare for what’s coming. Yes,” said Asama. “Is anyone here brave enough to ask Mito if she managed to use the bathroom this morning?”

“Why do the girls in our class always ask for the impossible?” protested Tenzou.

A stir ran through the class, but Mitotsudaira remained motionless after slamming open the door with a smile.

The idiot suddenly stepped forward in that tense atmosphere.

Mitotsudaira accepted his vocal counterattack from head on.

…S-something to ask him?

Was this about last night’s email, or about that girl from yesterday?

In both cases, she had intended to initiate the conversation herself to crank up the pressure of her question, but this shattered what resolve she had built up.

“Judge.” He gave a serious nod and raised his hands on either side. “You wanted a massage from me, didn’t you?”

Oh, she said quietly on the inside.

After school three days ago, she had indeed discussed that with Asama while waiting for him. She had considered it would be a good idea to get “massaged” by the harshness of a masculine society.

Asama had been terribly worried for her back then.

She must have asked him to give her some help there.

…Is he going to give me some social experience?

He would still have a lot let to learn himself, but he knew a lot of people and he did a lot of work at the Main Blue Thunder which was built into their home.

And she would be most comfortable if it was with him. So…

That sent a stir through the others.

“She actually said it!”

Mitotsudaira was a little disturbed by how weirdly excited everyone was.

Tenzou looked left and right and then raised his hand.

“Hey, I might as well get the first session done here. That okay with you, Nate?”

This was a place of learning, so it was the perfect location to be taught the rules of the workplace and society. And the perfect teacher for her was right there. If she did not understand something, she could just ask him. So…

“Judge! I have no objection to that! Bring it on!” She slapped her own chest. “Give me a good ‘massaging’ and make a proper woman out of me.”

Another stir ran through the class.

“She said it again!”

Mitotsudaira was again disturbed by how weirdly excited but also somehow worried everyone was.

“Um, what are you all so worried about?” 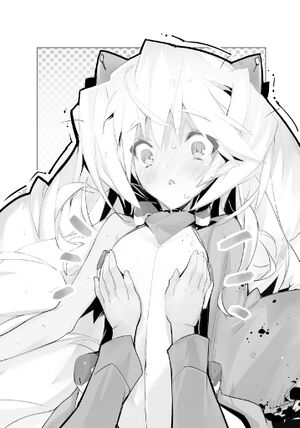 Her king raised his hands as if preparing to place them on her shoulders. She tensed up in preparation and he nodded.

What is this about? she wondered.

Then she felt a total of ten fingers on her chest.

It was her king’s hands.

Naito saw the idiot move while all other movement had ground to a halt.

Mitotsudaira was blushing and frozen in place, but the idiot pushed his hands into her chest and leaned some of his weight into it.

After a final, stronger push, he straightened back up, wiped sweat from his brow, and gave her a thumbs up.

“I used a Shinto Kotodama prayer, so that should’ve had some effect. Let’s keep working at this together, Nate!”

“Why would you do that in front of everyone!?”

Naito saw her make a full rotation and strike the idiot with a backhand blow.

Her only thought: Wow, look at him fly.

Adele watched as a blushing Mitotsudaira held her chest and started to run from the classroom.

Meanwhile, the idiot had already crashed through the desks to fly to the back of the classroom. He broke some of the lockers there, but that happened a lot. Noriki would probably fix them without a word. No one would even ask him. They all knew he would do it without being asked.

The sliding door slammed shut and silence hung over the class. Except for Asama who opened a sign frame.

“Um, Mito? I’ve already arranged the ship to take you on Principal Sakai’s errand. Yes, it will pick you up directly from Musashino’s rear deck.”

“Not much fazes you, Asama-san!” said Adele.

“Giving her some time and letting it fester is the wrong move. Shinto purification is all about eliminating that sort of stagnation.” Asama placed a hand on her chin. “But I think the problem here was Toori-kun saying the ‘grow, grow, growwww!’ part out loud in front of everyone.”

“Preeeeetty sure that wasn’t the main problem,” said Naito.

Adele had to agree.

Gold Mar: “Honestly, I feel like a similar scenario keeps playing out every once in a while.”

Silver Wolf: “And I feel like I’m the victim every single time!”

Mar-Ga: “So, Mitotsudaira, does this mean you don’t want to correct that?”

Scarred: “In Lady Naito’s flashback, your main issue was that he did it ‘in front of everyone’.”

Asama: “Oh, these records are locked once the next person’s flashback is complete, so if you do want to make a correction to that one, you’ll have to submit a request after this has been submitted.”

Silver Wolf: “Th-that is a minor issue of nuance, so it does not need to be corrected.”

Time seemed to fly while Mitotsudaira grumbled in her heart.

It was just before noon by the time she received the flowers and arrived on Musashino’s rear deck.

Descending to the landport and heading to Totomi from there would mean being caught up in the loading and unloading of cargo. The wagons clogging up the roads would make that dangerous, so she was taking a ship directly to Totomi.

The transport ships had a lot of high school students onboard them. There were apparently some Committee Heads and officers on one of the ships, but they would be on their way to a negotiation. She even heard some musical instruments playing from a distant ship, so it was a lively scene. Her ship was taking some time loading all of its cargo, but it would apparently leave by one.

She stood alone on the deck.

She had no idea how many times she had said that today, but for now she opened the instructions from Sakai.

“Leaving flowers at a cemetery feels awfully lonely on your own.”