Born on January 3, 1975. From Tokyo. Making good progress on the Kyoukai Senjou no Horizon side story along with the main story. Also started a new project called Clash of Hexennacht and working towards its realization.

Born in Yamagata and raised in Tochigi. “I’ve been eating a lot of smoked eggs recently for that distinctive scent.” What scent would that be, Sensei?

Mitotsudaira was Musashi’s #1 knight. She had not wanted that position; she had been given it by the system and so she would be one of the faces seen when other nations visited. She had wanted to cast that aside, but she had been unable to bring herself to do so and thus still carried it around with her.

But she was starting her third year of middle school today, so she hoped she could change at least somewhat.

“Maybe I’m not trying hard enough if all I’m doing is sitting here thinking about it.”

She was looking forward to some things about the new school term. She could see her king every day and she could chat with the acquaintances she was willing to call her friends. And…

“I get to wear the new uniform today!”

This year’s new style of uniform was hanging on the wall of her bedroom. The gray base was traditional for middle school, but the sides of the inner suit were black instead of white. Kimi and some others loved how the tight fight showed off your figure, but she felt some pressure from the cut of the chest and how the supports below the chest were slanted diagonally down toward the center. It felt like she was being told to grow bigger so as not to waste that fabric, but…

However, some others around her apparently easily covered up those chest supports. When they had all tried their new uniforms on together, she had heard comments such as “I wish we had a chest band like the high school uniform” and “Yes, this doesn’t stop the vertical shaking.” Feigning calm there was not easy. Adele, on the other hand, let the panic show on her face.

“Yet for some reason, I was photographed as the model.”

She felt like she had been set up, but even so, getting together with everyone like that had been a lot of fun. During spring break, that had been displayed on Musashi’s divine network along with models showing off this year’s elementary and high school uniforms, so her king might have seen it.

I wonder if he did, she thought while moving to the kitchen.

There she found a breakfast prepared by the automaton sent here last night. She found bread, soup, and a ham salad, but since they had the opening ceremony today, she wanted something special. Thus…

“Time for some breakfast meat.”

She was so oddly excited that it surprised even her. At any rate, her main dish this morning was pork topped with beef. Then some lamb for the vegetable. The chicken is the drink. But as she added salt, vinegar, and soy sauce to what she had cooked, broiled, and boiled, a sign frame appeared. It was from her king.

“Hey, Nate. When are you leaving home? That new uniform is going to take some time, right?”

That would mean he had indeed seen the picture. She gasped, but…

“I-I will not be wearing that one. I have a personal one with special embroidery.”

“Ohh, that sounds cool! Then shoot me a divine transmission when you leave. We can meet up at the bridge.”

She said “judge” as he ended the transmission and then she took a deep breath.

“Okay.” She stretched her back. “That means no hamburger steak for dessert.” 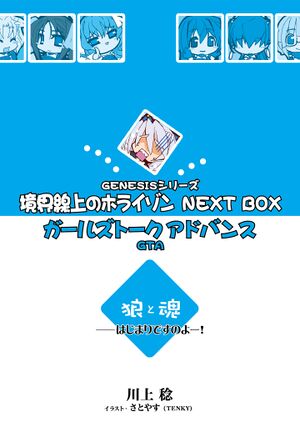 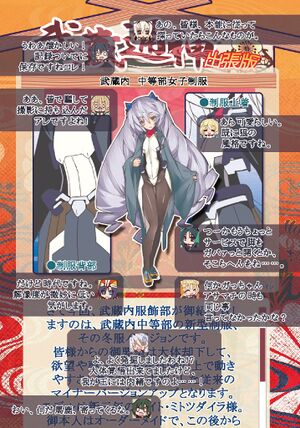 [First, everything behind the text boxes]

Text: Now, the Musashi Sartorial Club is excited to introduce you to Musashi’s new middle school uniform. This is the winter version. Almost all of your requests were turned down and we have only made some minor improvements on the existing design that prioritized ease of movement. Our model is Nate Mitotsudaira of the new third year class. She had ordered her own custom version, so later on

Horizon: Um, everyone, look what I found while letting my instincts drive my searching habits.

Asama: Wow, this takes me back! I’ll save this as part of the records!

Adele: Oh, this is when we tricked her into getting photographed, wasn’t it!?

Mary: How cute. She already had the wolf look down back then, didn’t she?

Naruze: Really, I wish she would just spread her legs for some nice fanservice.

Naito: Ga-chan, didn’t you say the same thing when it was Asama-chi?

Gin: You can really tell how old this is. The resolution seems somewhat low.

Nate: H-how did you dig this up!? I already know it’s hopeless, but please don’t let my king see this!

Masazumi: Hey, get away from me, idiot. 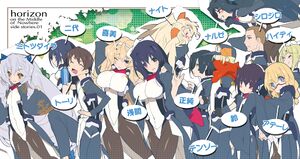 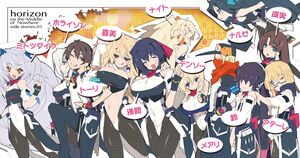 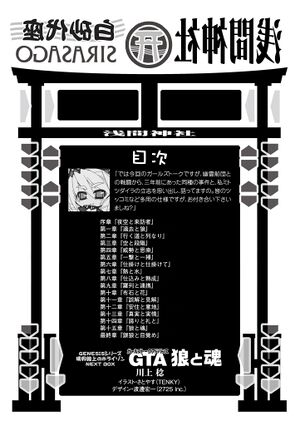 Mitotsudaira: In this Girls Talk, we battle some ghost ships and then we reminisce and discuss a similar incident from 3 years ago where I, Mitotsudaira, decided what to do with my life. We will all be joking with each other throughout, so keep that in mind, okay?” 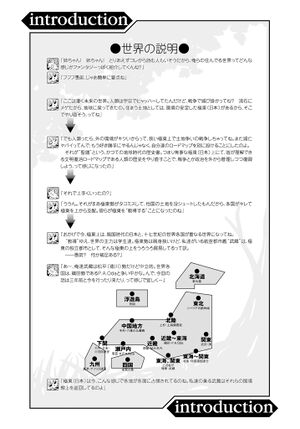 Toori: Sis! Sis! I bet some people will start reading here, so can you introduce our world in a fantasy-ish way?

Kimi: This world exists far into the future. Humanity went to space and had a blast there, but were nearly destroyed by war. That was a real bummer, so they went back to earth. The only livable area was the Far East (Japan) since the environment was more stable, so they tried to redo things there.

Kimi: But since the environment outside was too harsh, silly humanity ended up fighting territorial wars over the limited land of the Far East. They nearly wiped themselves out again, so they decided to create a roadmap for themselves instead of just doing whatever they wanted. They created a history book of the former Earth Age and called it the Testament. Everyone knew civilization could be restored if they followed that roadmap, so they decided to redo history in the Far East (Japan) using that. That made war and such externally managed by politics.

Toori: Did that work out?

Kimi: That led to a world where Japan’s Warring States period and the rest of the world’s 17th Century history are both playing out in the Far East. Since we are being “educated”, the world’s main power is held by the students. It’s restrictive for the Far East, but our aerial city ship named Musashi travels around the Far East engaging in trade as an independent Far Eastern city. …Foolish Brother? Got anything to add?

Toori: Well, here in Musashi, we count as Matsudaira (Tokugawa), but we’re neutral. The rest of the world is fighting against P.A. Oda, which counts as the Oda clan. Also, this story will move back and forth between 3 years ago and the present.

Kimi: The Far East (Japan) has its different regions occupied by the world’s nations like this. Our Musashi travels along the national borders.

Map [More or less top to bottom, left to right]: 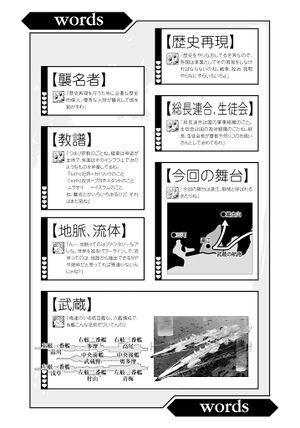 [Top to bottom, zigzagging down]

History Recreation: We’re redoing history in this world, so every nation is required to recreate history. This can be done with war, politics, ingenuity, or whatever else

Name Inheritor: The historical figures necessary for the history recreation. Skilled personnel inherit those names and run their nations.

Religion: In the Far East, Shinto is the main religion, but the other nations follow others based on their infrastructure.

There are others, like magic, but they can wait until later.

The Current Stage: The current stage is Totomi. That’s the area known as Shizuoka.

Ley Lines, Ether: Hm, ley lines are those things from fantasy stories. Y’know, the power lines that run all around the world. And you can think of ether as the MP or fuel extracted from the ley lines.

Musashi: The aerial ship we live on. There are 8 ships in all and each one has a name. 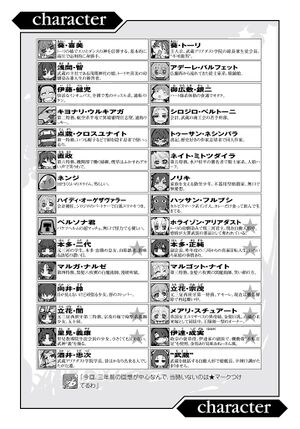 Kimi: This story is mostly reminiscing about 3 years ago, so the people who weren’t yet with us then are marked with a star. Their divine chat names are given in parentheses.