It had to do with the buoyancy of the human body. She had been vaguely aware since her first year, but she was sure of it now that she was in her second year.

She was the type of person who floated.

But that was a matter of physics and was perfectly normal.

However, she had never paid attention before, so she had to wonder if she was the only one. It may have had to do with the diet divine protection included in her Shinto contract.

…Maybe other people sink like a rock when they get in the water.

She was a little sleep deprived and felt she might not be thinking clearly, but she decided to ask someone with similar stats.

“In what way? Emotionally? Spiritually? Or do you mean my mood?”

Those were all the same thing, but Asama wanted to avoid saying she meant the breasts. Saying that during the water purification would send her Shinto impurity meter off the charts. So she chose her words more carefully.

“Um…I’m referring a part of the human body. I can’t say anything too weird since I’m in the middle of my water purification.”

“I suppose not. But float? …Is it something very important to women and does it stick out from the body?”

It sounded like Kimi had caught on, so Asama nodded in the spring.

“Judge. I think I get the picture. Now, just to be sure, what about it?”

“Well, I realized I float there, so I was wondering if you’re the same.”

“I do. I’m watching it happen right now.”

“W-wait just a second! You’re in the Asama Shrine’s spring, right!? I’ll be right there!”

Through the sign frame, Asama heard her calling for her “foolish brother”.

“Come here, foolish brother! We need to simulate it, so fill a pot with water and stick it right in! Asama grew a penis this morning and she’s playing with it by making it float in the spring, so you need to go fight back with your ‘look, it’s a plesiosaur’ gag!”

“I-I did not grow one of those!! Where did that come from!? I was talking about my breasts!”

“Eh? But you said it was a part that sticks out. A part! The boobs are two parts!”

“Ugh. That really pisses me off, but I can’t argue against that!”

“I’m the silly one!?” she shouted with her blood pressure rising so early in the morning, but then she heard his voice.

“Hey, I just tried it and it doesn’t float at all. …Sis, why are you carrying over an air pump!?”

It seemed those two were as lively as ever.

At any rate, Asama’s chilled head began to wonder if the spring had a water heating function. 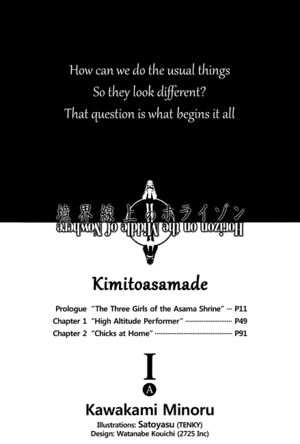 How can we do the usual things

So they look different?

That question is what begins it all

Prologue: The Three Girls of the Asama Shrine – P11

In the distant future, history is being recreated in the limited territory left to mankind.

In the year 1647 of the Testament calendar, the Testament, a manual for the recreation of history, has stopped updating, and a period of time known as the Apocalypse deepens. Meanwhile, in the Far East, the people live their lives while filled with anxiety and worry for the future.

The Musashi, an aerial city ship that moves about the Far East, has traveled from Mikawa, through Osaka, and to its next port, Aki and Itsukushima. Aki is the headquarters of K.P.A. Italia. And in the sky above the Seto Inland Sea, the students of Musashi and Aki will hold a gagaku festival as a part of the spring academy festival.

Asama Tomo, one of Musashi’s students and the only daughter of the Asama Shrine, is a shrine maiden and a second year in Musashi Ariadust Academy. Her breasts and height are both impressive, but she pays little attention to that fact. Those with plenty are oblivious to their good fortune. However, she does have a certain thought. She is wondering whether she should begin playing something more removed from Shinto gagaku at this gagaku festival.

Asama is a diligent girl. A large-breasted childhood friend causes a lot of problems, but she lives a proper life. But it all began when a quick comment from a certain idiot made her think she should change her usual self.

“I wonder what he would say if I told him I was starting a band.”

After all, she had always been a gagaku-focused archery-obsessed purifying shrine maiden who no one could hope to oppose. A pop song? Singing about love or being in love? That was ridiculous. But it was true she had a lot of music on black disks…

What was she supposed to do?

And so she will be joined by her dancing and singing friends, the large-breasted Aoi Kimi and the flat Nate Mitotsudaira, for the beginning of many twists and turns.

As they run into the members of the ’47 student council or chancellor’s officers, a mysterious automaton with no memories who boarded the ship at Mikawa, and other irregular beings, Asama will occasionally realize she has started shooting without realizing it, but from now on she will be in control of her own life. Maybe.