After returning from her morning run, Mitotsudaira would take a shower.

She used warm water. The shower sprayed into the bathtub, so after washing off her sweat, she would let the water gather in the tub and take a light bath. The Western bathtub was shallow, so she usually either let her hair fall out of the tub while lying on her back reading a book, or she would lay face down with her chin and arms hanging out.

Today, she chose the latter option. She lightly kicked at the water gathered by her feet and the movement caused her butt to wiggle where it stuck up above the water. The warm water tickled as it flowed down the roundness toward her legs. She liked making waves by shaking her hips, and having enough warm water for it to overflow was a luxury aboard the Musashi.

While enjoying this morning relaxation, she thought about the coming day.

…I have to go to school, but what else should I do today?

She had no plans for breakfast yet. She could even pick something up somewhere. She also enjoyed having no set plans for lunch or afterschool. She did have her business and the perfume factory to deal with, but she still had some spare time. As long as she did not choose the “worry about what to do” option, she felt like she could do anything.

“Maybe I should practice the viola for the first time in a while.”

As she thought about that, a sign frame opened. It was from Asama who was designated as a friend, so it opened automatically. It set up a conversation link, so she wondered what this was about.

“Oh, Mito. Um, Kimi just asked me about the relative weights of the human body, and… Oh, sorry. Now that I think about it, asking you wouldn’t be much help. Sorry. How about we talk about something else? We gathered some bamboo shoots behind the shrine again this year, so I’m thinking about cooking them while they’re still soft.”

“Wh-why are you shifting the conversation further and further away from me!?”

Meanwhile, a sign frame from Kimi appeared right next to the one from Asama. For some reason, it showed Kimi holding a bucket.

“Heh heh. Mitotsudaira! Asama grew a penis and is playing warship by letting it float in the spring, so we’re about to head over, become submarines, and sink it!”

“Eh? So this isn’t about bamboo shoots?”

“That’s a euphemism! A euphemism! You stretch it out and then – whack! – cut it away! …Eh? What is it, foolish brother? Why did you shrink back when I said ‘whack’? Stop worrying about that and get ready to make the mold.”

“W-wait a second, Kimi! What do you mean make the mold!?”

“Heh heh heh. C’mon now. What kind of indecent things are you imagining? …Start with a chocolate one, foolish brother!”

Mitotsudaira had a bad feeling about this, so she broke the sign frames and took a breath.

Although she had a feeling she would not be able to stay in the bath much longer now. 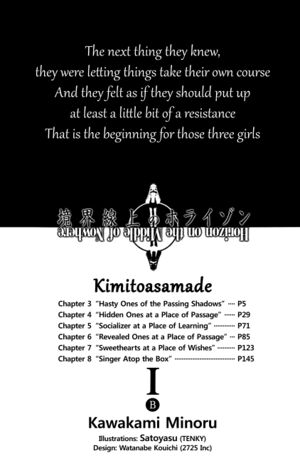 The next thing they knew, they were letting things take their own course

That is the beginning for those three girls

Chapter 3: Hasty Ones of the Passing Shadows – P5

Chapter 4: Hidden Ones at a Place of Passage – P29

Chapter 5: Socializer at a Place of Learning – P71

Chapter 6: Revealed Ones at a Place of Passage – P85

Chapter 7: Sweethearts at a Place of Wishes – P123