Kimi ran. Her step was light. There were plenty of transportation routes from Musashino to Okutama early in the morning, so it was an easy trip and she hurried with her baggage in hand.

She reached a giant atrium in Okutama.

The normal way to the Asama Shrine was to take the stairs down by the bow and arrive from the front, but things were different for Kimi. Especially this time. So…

She grabbed and picked up the silver wolf from the side as the girl tried to enter through the front stairway. Kimi then spun around and adjusted her balance while running. She placed her axis of power on her toe tips and leaped forward.

“Where do you think you’re going!?”

“The Asama Shrine of course. Are you okay?”

“Y-you just passed it! We can’t get in from the back because of the waterfall and river.”

Kimi jumped from the starboard edge of the Asama Shrine’s atrium to the aft edge behind the shrine. She jumped to the stairs in the center of cliff-like layers sticking out from the wall.

Mitotsudaira nearly fell from her left arm, so she used her hips for a midair spin to adjust her center of gravity. And as she lifted Mitotsudaira up…

The jump provided enough distance. While falling one level down, they moved diagonally from the left of the Asama Shrine to the rear. They landed on the passageway one level belowground at the aft end of the atrium. But…

She did not land on the floor. The railing of the terrace-like passageway was more than enough for her feet. Her right toes landed on the atrium side of the railing and she ducked down to view the back of the Asama Shrine below. So…

She made a single flip as she fell and landed in the back of the Asama Shrine. It was a small space beyond the roof meant to protect against peepers and rain. The Asama Shrine’s spring was there and Asama was just leaving it.

Kimi twisted around and jumped between Asama, who was just about to enter the changing room, and the roof. And…

She stripped Asama’s towel off the girl’s back with her lips. Then she licked those lips.

There was a scream and two loud splashes. 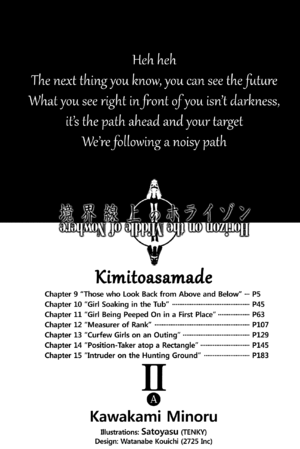 The next thing you know, you can see the future

What you see right in front of you isn’t darkness, it’s the path ahead and your target

Chapter 9: Those who Look Back from Above and Below – P5

Chapter 14: Position-Taker atop a Rectangle – P145