“Hey, why not install a water-heater? IZUMO makes ones for shrine use, don’t they?”

Asama heard Kimi speaking while resting her elbow on the edge of the wooden frame surrounding the Asama Shrine’s spring.

Asama was inside the changing area. She had just finished hanging up the two uniforms which had gotten wet after being kicked into the water before. She returned to the spring while well aware of the astonished look on her face.

“Eh!? Then you want some licking first!? You’re amazing, Asama! I need to tell my foolish brother! Nice! Nice tasting! I suppose you would respond better after being licked from all over!”

In the spring, Mitotsudaira spat out the wine she had been drinking to warm herself.

“Wh-what are you trying to get my king to do!? I-I will not let you turn him into a dog! I will not allow it! And if anything, shouldn’t Tomo lick him as a form of purification!?”

“What are you saying Mito!?”

“Yeah, I guess you would be the one that wants to do the licking, Mitotsudaira… Anyway, are you sure you should be drinking the Asama Shrine’s wine?”

“Eh? But I was feeling chilled.”

“Um, Mito, we don’t have a boiler, so your uniform will have to air dry…”

“Hm? Doesn’t that just mean I have to wait a little longer?”

Asama and Kimi exchanged a glance and finally Asama spoke to Mitotsudaira.

“Our bathroom is in the main building.”

Mitotsudaira finally checked to see how much was left in the bottle and found over half of it was gone.

“Well, I was out hanging your uniforms up to dry…”

“Heh heh. You’re dodging responsibility! Aren’t you, Asama!? Yes, I understand you don’t want to admit you had a feeling this would happen but wanted to see how Mitotsudaira would handle the situation! Let’s use Mitotsudaira for our fun for the day! That’s true friendship!”

Kimi lay flirtatiously on the edge of the spring, faced Mitotsudaira, and then slapped her own chest.

“What in the world are you hoping is going to happen!?”

“Heh heh. Hurry up and finish off that wine. But take good care of the empty bottle! You’ll need it later!”

As the other two argued, Asama decided to wash her body again. And then…

“Ah! What do you think you’re doing, Asama! Don’t think you can wash off the marks from your licking kisses! Especially since I ran out of lip balm this morning and had to borrow my foolish brother’s! Oh, but it was a Shirasago product, okay?”

Really, though. What are we doing in this place of purification? wondered Asama so early in the morning. 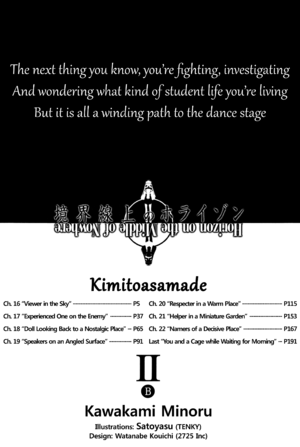 The next thing you know, you’re fighting, investigating

And wondering what kind of student life you’re living

But it is all a winding path to the dance stage

Chapter 18: Doll Looking Back to a Nostalgic Place – P65

Last Chapter: You and a Cage while Waiting for Morning – P191