Asama looked between the changing room clock and the two uniforms hanging in front of her eyes.

…These definitely aren’t going to dry in time.

She should have expected it to work the same as her own uniform.

But when she checked the clock and the remaining drying time…

“Kimi, Mito, I’ll leave your uniforms here, so let’s get something to eat first. They should be dry by the time we’re done.”

“Eh? Oh, is that so?” asked Mitotsudaira. “I just assumed you drank sake for breakfast here.”

“…What kind of family do you think we are?”

Asama heard water dripping at the spring. She peeked that way and saw Kimi standing up and letting the water flow off of her body’s curves and her hair. She caught the drops falling from her breasts and pointed her chin toward Mitotsudaira who sat on the edge of the spring.

“Then can you hurry it up, Asama? Mitotsudaira is about ready to use a bottle if she has to wait any longer.”

“Yes, yes,” said Asama as she pulled a yukata from the changing room shelf.

There was only the 1. The one she had been wearing was in the basket, but there were 3 of them at the moment and a total of 2 yukatas. Asama confirmed that fact, and…

After some discussion, they settled on a certain course of action. Asama had initially wanted to return to the main building first and grab an extra yukata, but…

“You want me to stay here alone with Kimi!?”

That plan was rejected. They ended up wearing the 2 yukatas with Asama and Mitotsudaira standing back to back and each putting on half of each yukata. Then Kimi entered between them. Once they closed the front, it covered them fairly well.

This is almost like a hidden talent, thought Asama fairly seriously as they walked to the main building.

Mitotsudaira had difficulty matching their pace since she was in the back and facing backwards, but about halfway there…

Kimi suddenly touched Asama and Mitotsudaira’s butts. And she stuck her finger into the crack.

Asama shrieked and pulled her hips back in rejection, but it seemed Mitotsudaira did the same thing. A grinning Kimi and 2 falling yukatas were left behind as Asama and Mitotsudaira knocked each other out into the open. 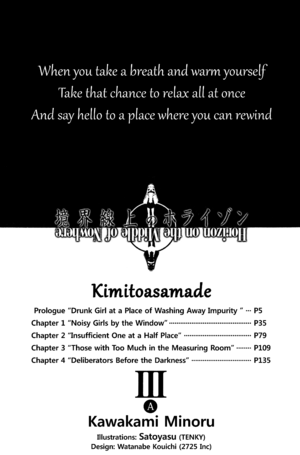 When you take a breath and warm yourself

Take that chance to relax all at once

And say hello to a place where you can rewind

Prologue: Drunk Girl at a Place of Washing Away Impurity – P5

Chapter 2: Insufficient One at a Half Place – P79

Chapter 3: Those with Too Much in the Measuring Room – P109

Chapter 4: Deliberators Before the Darkness – P135