In the Room of Fault Finding

There was one thing Mitotsudaira always looked forward to when visiting Asama’s room: the food.

There was no emphasis on snacks, meals, or drinks; it was all high quality.

She had assumed it was made from the finest ingredients, but Asama would buy the same things as everyone else.

The breakfast she ate after bathing in the purification spring was made to warm her chilled body.

“Oh, the fried eggs are for Mito. We didn’t have any thick cuts of meat, you see. We already have sake, but be sure to eat them with soy sauce while they’re hot.”

“Thank you. This is more than enough.”

Mitotsudaira cooked too, but since she tended to make things the way she liked them, it all tended to be a bit strong.

…In fact, French cooking as a whole is fairly strong…

It had originally been the food of the Gaul region. That meant roasting mountain birds whole and cooking dried meat in wine, so it was usually strong.

“Oh, stop with that,” deflected Asama, but Kimi slapped her own chest with both hands in a “bring it on!” gesture. Mitotsudaira chose to ignore her.

However, after getting some tea and starting to eat, Mitotsudaira was grateful for the flavoring that did not rely on spices.

“See?” said Kimi. “If you marry Asama, you can live a happy culinary life.”

“Then.” Kimi narrowed her eyes and licked her lips. “Why not come to our place where my foolish brother can feed you meat? Wouldn’t that balance things out nicely?”

“…Uh, Kimi? Wouldn’t both Mito and I need to go to your place for that balance to work?”

Hearing that, Kimi set down her chopsticks and brought her hands together as if begging them.

She blatantly groped their breasts, so the two of them slapped her. 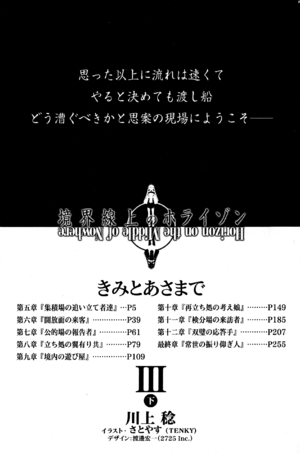 Welcome to a place of thought

Where the current is faster than you expected

Chapter 5: Evictors in a Place of Accumulation – P5

Chapter 8: Winged Ones Standing Up – P79

Final Chapter: Those who Look Up at the Normal World – P255