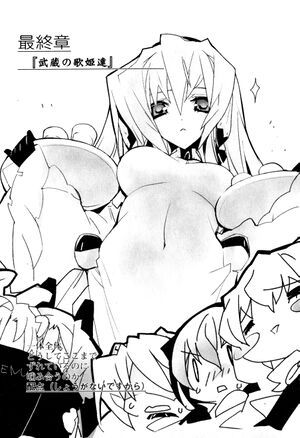 How in the world

Do we get along so well

So out of sync?

Point Allocation (We Have No Choice)

…I feel like I said something really noteworthy last night…

Bring that mood back! Bring it back to me! thought Asama, but it was no use. The more she thought about it, the higher her temperature grew and the more she sweated.

Mitotsudaira tilted her head in the next seat over.

“Tomo? You’re going to regret it if you don’t decide what to order soon.”

They were in the Blue Thunder. They had wanted to celebrate after the Gagaku Festival the night before, but that had not worked out. Instead…

“Heh heh. I ended up falling asleep in Asama’s spring, but what happened to me afterwards? When I woke up, I was in her room and wearing a yukata, so who knows what kind of naughty things she did to me while I was asleep. Ahhh, the Sailboat!”

“I did nothing of the sort!”

Asama realized everyone was glaring at her.

Eh? She was confused for a few seconds before frantically speaking up.

“Does it make any difference?” asked Naito with a bitter smile. She and Naruze looked like they had slept well. “It was a good thing we prepared in advance. Right, Ga-chan?”

“Yes. We messed up by leaving the door open again, but we sure got a good night’s sleep.”

Asama was curious what they were talking about, but she decided it was best not to ask.

Still, she had a lot she needed to do now.

“Um, Mito? I put the Cerberus in the Asama Shrine’s Mouse management system, so I’m getting reports on her. She’s going to enter hibernation while we supply her with ether. There will be reports at the important intervals, so I’ll forward those to you.”

“Judge. I was always thinking I would get a Mouse to help me serve my king, but it looks like that won’t be for a while.”

Asama realized Mitotsudaira talked about being a knight and having a king a lot more than she used to. And…

“Naito and Naruze, Musashi’s port authority has given you permission to use the divine network. Wild Kamelie still has a contract for this year, so when you account for the handover process, it should start partway through next year.”

“What can we use that for?” asked Naruze.

“You do a divine radio show for Musashi. That’s apparently what the representative does.”

“Wild Kamelie was doing that?”

“You apparently don’t have to do it. It’s a privilege. So will you do it?”

Naruze crossed her arms and Naito started making suggestions with a smile. Asama knew they would agree to do it, but then Kimi tugged on her sleeve.

“What do you have for me!? Eh? Are you saying you want me to grope your boobs!? You are, aren’t you!? …Well, if you insist. Ready? Oops, that was your crotch! Finger thermometer!”

“What do you think you’re doing!?”

Kimi held out her hands, so Asama gave her the powdered water that was sitting on the table.

“The worst part about this is I can’t say it isn’t useful,” complained Kimi.

“I thought the same thing when I saw it here…”

“Then how about giving us all the same present? …The reconstruction of Tama’s atrium park should be complete by the 12th next month.”

That was about a month away, but what did that matter? Then Asama remembered their previous date.

“If there will be an ice cream stand there, I can accompany you properly this time.”

Mitotsudaira and Kimi exchanged a glance.

Kimi gave a small but unmistakable nod, so Mitotsudaira thought to herself.

…I don’t know when she dealt with that, but I’m glad she’s gotten over her ice cream issue.

An old regret between Mitotsudaira’s king and Asama was no more.

The king of Remorse Way had erased someone else’s remorse.

…He really is something.

She smiled bitterly in her heart, but she was the same.

She was neglecting herself to help out others.

And she was fine with that being her form of justice.

With that in mind, she spoke to Asama.

“Then the three of us can try again there. …And we can invite my king as well.”

“Representatives of Musashi’s shops are holding a music festival in the Tama park. It will last three days and the third day is modern music like we play.”

“Hold on,” said Naito as she opened a Magie Figur and checked her divine transmissions. “Oh, you’re right! It said Reconstruction Festival at the top, so I ignored it!”

“What, do you want a rematch with us? You’ll regret underestimating Technohexen.”

“Heh heh. You’re on. But…” Kimi looked to Mitotsudaira. “What shop will we be representing? Mitotsudaira’s company? A restaurant?”

“That’s the problem. Only normal street shops are allowed to participate, so that rules out companies and shops owned by knights like me.”

“Oh, dear. Then we have no way to participate at the moment?”

“Judge. I brought it up so we could figure out what to do.”

Kimi asked another question after that.

“Will we be writing a new song?”

She did not ask if they would be participating. That went without saying.

And if they did write a new song like Kimi suggested…

…I really will have only sung that song for Toori-kun!

She wanted to believe that girl had not heard the previous night’s conversation. So…

“Tomo, why do you sound so awkward here?”

“Calm down.” Asama took a breath. “Okay, now we need to figure out what shop we can represent.”

Just then, a quiet figure walked over from the kitchen.

Kimi, who sat by the aisle, watched as P-01s bowed to them all.

“First of all, I have some good news and some awful news for Asama-sama.”

“Eh!? Right off the bat? And for me specifically!?”

“Judge.” The automaton nodded. And, “This is the good news: I have made a new version of the powdered water. I hear you used some last night, so please take it.”

They hung their heads when a chartula was placed in front of each of them instead of just Asama.

…That’s what I’m talking about.

Foolish brother, you don’t just end up on the receiving end of this when you visit, I hope.

I would feel sorry for him, but it might be fun, she thought as P-01s moved again. She placed a single pamphlet on the table.

“And this is the awful news: During the music festival in Tama’s atrium park, the Blue Thunder would like your band to represent us.”

Asama looked down at the pamphlet.

“You want us to be the Blue Thunder representative for this?”

“Judge. …Oh, and the manager has already made up her mind, so you have no choice in the matter. What do you say?”

When Mitotsudaira heard that, she stared forward and…

She mimicked the Cerberus’s bark.

That must mean she had made up her mind. In that case, thought Asama.

“This really is awful.”

She sighed, but also smiled. Then she grabbed Kimi and Mitotsudaira’s shoulders. With her arms lightly wrapped around those shoulders, she turned all three of them toward P-01s.

Asama could not stop the smile that appeared in her eyes and mouth and she spoke clearly to P-01s.

“We will purify any news that awful, so please keep it coming. We can take care of it all.”

When she focused her ears, she could hear the rhythmical sounds of construction.

The Gagaku Festival was over and a new season was beginning.

Her usual life would resume today. But…

They exchanged a glance and smiled. Kimi’s face said “silly girl”, Mitotsudaira’s said “I’m not sure what to say”, Naito’s said “yes, yes” and Naruze’s said “you love it, don’t you?” She sensed a smile in all of the faces here, even the new expressionless one looking down at them.

She opened her mouth while they exchanged that look. 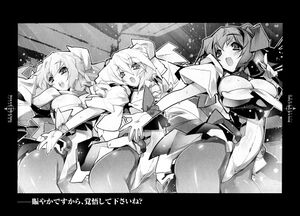 She felt like these words were her thanks to everyone.

“Things are going to be even more exciting from now on.”

—It’s going to be exciting, so I hope you’re ready.