We Are Girls Awaiting the Morning

Asama had a thought as she climbed the stairs from the Asama Shrine to the surface area.

Her morning routine had been on its usual pace when an idiot had fallen from the sky with a wolf in tow and licked her from the back to the butt. She doubted most people lived lives that could be described like that, but in her life it was entirely possible.

However, even with some extra time built into her schedule, taking the time to dry her clothes and cook breakfast had been a mistake. She was running quite late and it was past 8:20 when she reached the surface area.

Since she was going to be late either way, she decided to walk along the starboard road. Mitotsudaira and Kimi walked up on either side and the former asked a question with her hair blowing in the wind.

“No. Having you two with me is enough.”

“Heh heh. Really? I’m glad to hear I’m such a source of confidence.”

“Yes, if you two are with me, our teacher is sure to know who was the victim and who was the perpetrator when I explain why we’re late.”

Kimi began a full-speed dash toward the academy. Ah, thought Asama as she saw the idiot sister add a spin to her run to look back.

“Heh heh heh! You two can be late! I intend to make it in time even if it kills me!”

“Oh, dear. Why would I wait? Silly girls, you come running after me with your giant boobs jiggl-…no, I suppose that’s asking too much of Mitotsudaira… Well, you get the idea!”

At any rate, they started running. The athlete in the lead was taking this seriously and Asama wanted to use an acceleration spell to keep up, but they had a mock battle for gym class that day. She did not want to use up any Blessings.

Of course, she also felt wearing themselves out physically would affect the mock battle too, but…

She pursued Kimi who must have found this amusing because she hummed, skipped, and spun around all while maintaining her incredible speed.

“If someone saw this,” said Mitotsudaira, “it would look like a youthful scene of three girls teasing each other in a game of tag, wouldn’t it? You know, giggling and frolicking around.”

“Probably so,” said Asama. Her shoulders drooped as they left the nature district and arrived on the road leading to the academy.

They started seeing some students who were aiming to arrive just as the first bell rang, and on top of the stairs…

Everyone was waiting. Yes, they would be using the city for the mock battle, so everyone was gathered on the bridge.

So Asama hurried as the first bell rang through the sky. With Kimi out ahead and Mitotsudaira by her side, she rushed to join him and the others standing side by side as Oriotorai began taking roll. 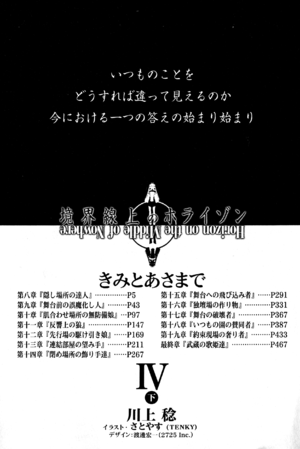 What makes the usual

Appear to be different?

This is the beginning to one possible answer

Chapter 9: Deceiver Before the Stage – P43

Chapter 10: Defenseless Girl in a Place of Skin Contact – P97