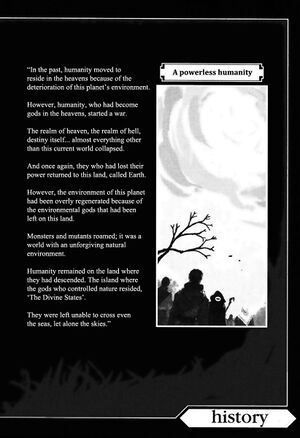 “In the past, humanity moved to reside in the heavens because of the deterioration of this planet’s environment.

However, humanity, who had become gods in the heavens, started a war.

The realm of heaven, the realm of hell, destiny itself... almost everything other than this current world collapsed.

And once again, they who had lost their power returned to this land, called Earth.

Monsters and mutants roamed; it was a world with an unforgiving natural environment.

Humanity remained on the land where they had descended. The island where the gods who controlled nature resided, ‘The Divine States’.

They were left unable to cross even the seas, let alone the skies.” 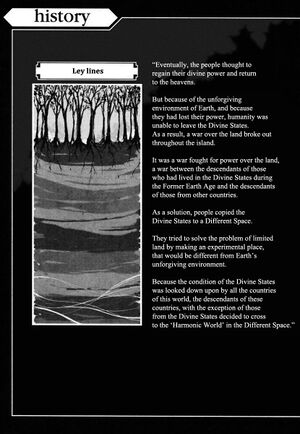 “Eventually, the people thought to regain their divine power and return to the heavens.

But because of the unforgiving environment of Earth, and because they had lost their power, humanity was unable to leave the Divine States. As a result, a war over the land broke out throughout the island.

As a solution, people copied the Divine States to a Different Space.

They tried to solve the problem of limited land by making an experimental place, that would be different from Earth’s unforgiving environment. 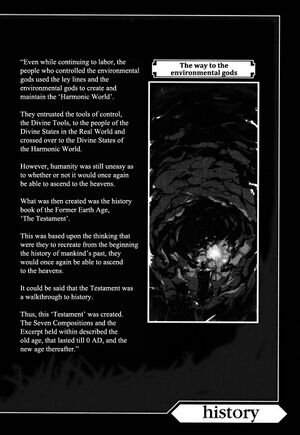 However, humanity was still uneasy as to whether or not it would once again be able to ascend to the heavens.

What was then created was the history book of the Former Earth Age, ‘The Testament’.

This was based upon the thinking that were they to recreate from the beginning the history of mankind’s past, they would once again be able to ascend to the heavens.

It could be said that the Testament was a walkthrough to history.

Thus, this ‘Testament’ was created. The Seven Compositions and the Excerpt held within described the old age, that lasted till 0 AD, and the new age thereafter.” 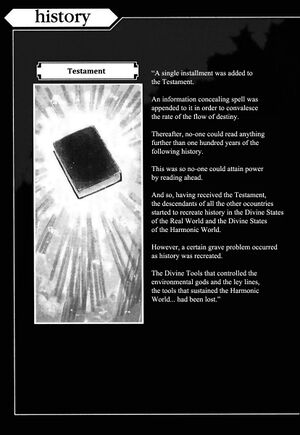 “A single installment was added to the Testament.

An information concealing spell was appended to it in order to convalesce the rate of the flow of destiny.

Thereafter, no-one could read anything further than one hundred years of the following history.

This was so no-one could attain power by reading ahead.

However, a certain grave problem occurred as history was recreated.

The Divine Tools that controlled the environmental gods and the ley lines, the tools that sustained the Harmonic World... had been lost.” 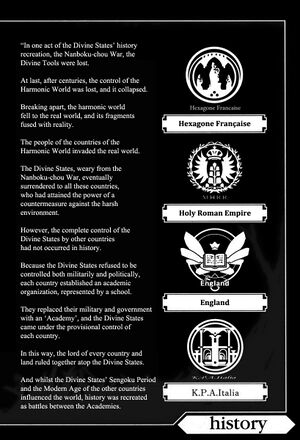 “In one act of the Divine States’ history recreation, the Nanboku-chou War, the Divine Tools were lost.

At last, after centuries, the control of the Harmonic World was lost, and it collapsed.

Breaking apart, the harmonic world fell to the real world, and its fragments fused with reality.

The people of the countries of the Harmonic World invaded the real world.

The Divine States, weary from the Nanboku-chou War, eventually surrendered to all these countries, who had attained the power of a countermeasure against the harsh environment.

However, the complete control of the Divine States by other countries had not occurred in history.

Because the Divine States refused to be controlled both militarily and politically, each country established an academic organization, represented by a school.

They replaced their military and government with an ‘Academy’, and the Divine States came under the provisional control of each country.

In this way, the lord of every country and land ruled together atop the Divine States.

And whilst the Divine States’ Sengoku Period and the Modern Age of the other countries influenced the world, history was recreated as battles between the Academies. 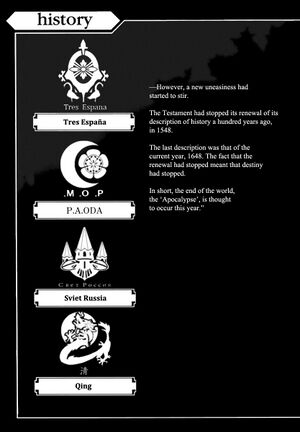 —However, a new uneasiness had started to stir.

The Testament had stopped its renewal of its description of history a hundred years ago, in 1548.

The last description was that of the current year, 1648. The fact that the renewal had stopped meant that destiny had stopped.

In short, the end of the world, the ‘Apocalypse’, is thought to occur this year.”