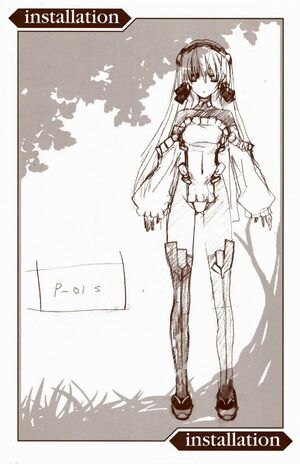 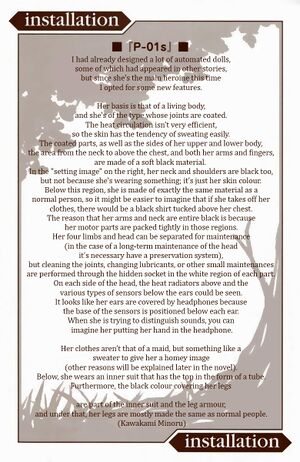 I had already designed a lot of automated dolls, some of which had appeared in other stories, but since she's the main heroine this time I opted for some new features.

Her basis is that of a living body, and she's of the type whose joints are coated.

The heat circulation isn’t very efficient, so the skin has the tendency of sweating easily.

The coated parts, as well as the sides of her upper and lower body, the area from the neck to above the chest, and both her arms and fingers, are made of a soft black material.

In the "setting image" on the right, her neck and shoulders are black too, but not because she's wearing something; it’s just her skin color.

Below this region, she is made of exactly the same material as a normal person, so it might be easier to imagine that if she takes off her clothes, there would be a black shirt tucked above her chest.

The reason that her arms and neck are entirely black is because her motor parts are packed tightly in those regions.

Her four limbs and head can be separated for maintenance (in the case of a long-term maintenance of the head it’s necessary to have a preservation system), but cleaning the joints, changing lubricants, or other small maintenances are performed through the hidden socket in the white region of each part.

On each side of the head, the heat radiators above and the various types of sensors below the ears could be seen.

It looks like her ears are covered by headphones because the base of the sensors is positioned below each ear.

When she is trying to distinguish sounds, you can imagine her putting her hand in the headphone.

Her clothes aren’t that of a maid, but something like a sweater to give her a homey image (other reasons will be explained later in the novel).

Below, she wears an inner suit that has the top in the form of a tube.

Furthermore, the black color covering her legs are part of the inner suit and the leg armor, and under that, her legs are mostly made the same as normal people. 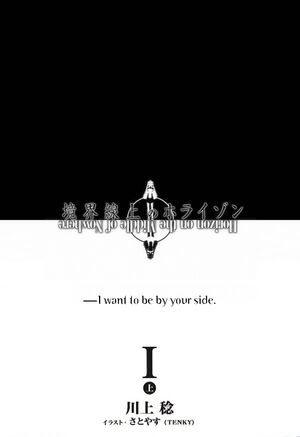 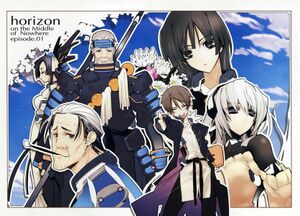 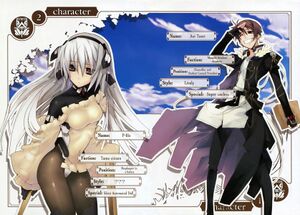 Position: Shopkeeper in a bakery 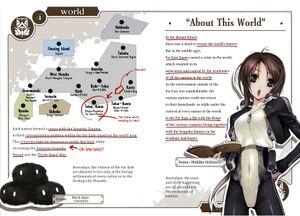 In the distant future, there was a need to restart the world’s history.

But in the middle ages, Far East Japan caused a crisis in the world, which resulted in its separation and control by the Academies of all the nations in the world.

As the environment outside of the Far East was uninhabitable, the various nations could not return to their homelands, so while under the control of every nation in the world, in the Far East, a life with the Kings of the various countries living together with the Sengoku Daimyo in the Academy had begun.

Nowadays, the wars and strife happening are all according to the recreation of history.

Each nation formed a union with the Sengoku Daimyo in their corresponding position within the Far East, based on the world map.

The countries fight for dominance inside this land, while recreating the Japanese Sengoku Period and the Thirty Years’ War. ←On the test?

Nowadays, the citizens of the Far East are allowed to live only at the foreign settlements of every nation or in the Airship-city Musashi. 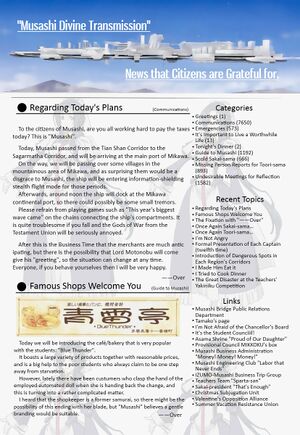 To the citizens of Musashi, are you all working hard to pay the taxes today? This is "Musashi".

Today, Musashi passed from the Tian Shan Corridor to the Sagarmatha Corridor, and will be arriving at the main port of Mikawa.

On the way, we will be passing over some villages in the mountainous area of Mikawa, and as surprising them would be a disgrace to Musashi, the ship will be entering information-shielding stealth flight mode for those periods.

Afterwards, around noon the ship will dock at the Mikawa continental port, so there could possibly be some small tremors. Please refrain from playing games such as "This year's biggest wave came" on the chains connecting the ship's compartments. It is quite troublesome if you fall and the Gods of War from the Testament Union will be seriously annoyed.

After this is the Business Time that the merchants are much anticipating, but there is the possibility that Lord Motonobu will come give his "greeting", so the situation can change at any time.

Everyone, if you behave yourselves then I will be very happy.

Today we will be introducing the café/bakery that is very popular with the students: "Blue Thunder".

It boasts a large variety of products together with reasonable prices, and is a big help to the poor students who always claim to be one step away from starvation.

However, lately there have been customers who clasp the hand of the employed automated doll when she is handing back the change, and this is turning into a rather complicated matter.

I heard that the shopkeeper is a former samurai, so there might be the possibility of this ending with her blade, but "Musashi" believes a gentle branding would be suitable.