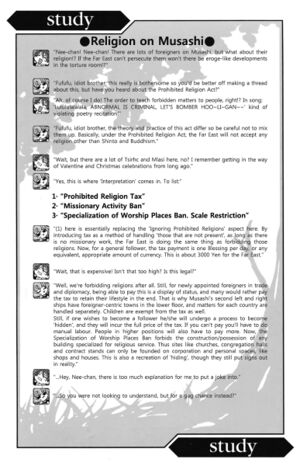 Toori: Nee-chan! Nee-chan! There are lots of foreigners on Musashi, but what about their religion!? If the Far East can't persecute them [1] won't there be eroge-like developments in the torture room!?

Kimi: Fufufu, idiot brother, this really is bothersome so you'd be better off making a thread about this; but have you heard about the Prohibited Religion Act?

Toori: Ah, of course I do! The order to teach forbidden matters to people, right!? In song: "Lulululalalala, ABNORMAL IS CRIMINAL, LET'S BOMBER HOO~LI~GAN~~" kind of violating poetry recitation!

Kimi: Fufufu, idiot brother, the theory and practice of this act differ so be careful not to mix them up. Basically, under the Prohibited Religion Act, the Far East will not accept any religion other than Shinto and Buddhism.

Toori: Wait, but there are a lot of Tsirhc and Mlasi here, no? I remember getting in the way of Valentine and Christmas celebrations from long ago.

Kimi: Yes, this is where 'Interpretation' comes in. To list:

Kimi: (1) here is essentially replacing the 'Ignoring Prohibited Religions' aspect here. By introducing tax as a method of handling 'those that are not present', as long as there is no missionary work, the Far East is doing the same thing as forbidding those religions. Now, for a general follower the tax payment is one Bless per day, or any equivalent, appropriate amount of currency. This is about 3000 Yen for the Far East.

Toori: Wait, that is expensive! Isn't that too high? Is this legal?

Kimi: Well, we're forbidding religions after all. Still, for newly appointed foreigners in trade and diplomacy, being able to pay this is a display of status; and many would rather pay the tax to retain their lifestyle in the end. That is why Musashi's second left and right ships [2] have foreigner-centric towns in the lower decks, and matters for each country are handled separately. Children are exempt from the tax as well.

Still, if one wishes to become a follower he/she will undergo a process to become 'hidden', and they will incur the full price of the tax. If you can't pay you'll have to do manual labor [3]. People in higher positions will also have to pay more. Now, the Specialization of Worship Places Ban forbids the construction/possession of any building specialized for religious service. Thus sites like churches, congregation halls and Contract Stands can only be founded on corporation and personal spaces, like shops and houses. This is also a recreation of 'hiding', though they still put signs out in reality.

With this restriction, large-scale movements can be prevented while protecting the religious rights of the people at the same time. Do you understand?

Toori: ...Hey, Nee-chan, there is too much explanation for me to put a joke into.

Kimi: ...So you were not looking to understand, but for a gag chance instead?