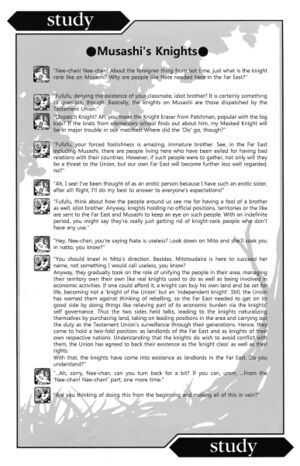 Toori: Nee-chan! Nee-chan! About the foreigner thing from last time, just what is the knight rank like on Musashi? Why are people like Nate needed here in the Far East?

Kimi: Fufufu, denying the existence of your classmate, idiot brother? It is certainly something to question, though. Basically, the knights on Musashi are those dispatched by the Testament Union.

Toori: Dispatch Knight? Ah, you mean the Knight Eraser from Patchman, popular with the big kids? If the brats from elementary school find out about him, my Masked Knight will be in major trouble in our matches! Where did the 'Dis' go, though?

Kimi: Fufufu, your forced foolishness is amazing, immature brother. See, in the Far East (including Musashi), there are people living here who have been exiled for having bad relations with their countries. However if such people were to gather, not only would they be a threat to the Union, but our own Far East would become even less well regarded, no?

Kimi: Fufufu, think about how the people around us see me for having a fool of a brother as well, idiot brother. Anyway, knights holding no official positions, territories or the like are sent to the Far East and Musashi to keep an eye on such people. With an indefinite posting, you might say they're really just getting rid of knight-rank people who don't have any use.

Toori: Hey, Nee-chan, you're saying Nate is useless? Look down on Mito and she'll soak you in natto, you know?

Kimi: You should kneel in Mito's direction. Besides, Mitotsudaira is here to succeed her name, not something I would call useless, you know? Anyway, they gradually took on the role of unifying the people in their area, managing their territory on their own like real knights used to do as well as being involved in economic activities. If one can afford it, a knight can buy his own land and be set for life, becoming not a 'knight of the Union' but an 'independent knight'. Still, the Union has warned them against thinking of rebelling; so the Far East needed to get on its good side by doing things like relieving part of its economic burden via the knights' self-governance. Thus the two sides held talks, leading to the knights naturalizing themselves by purchasing land, taking on leading positions in the area and carrying out the duty of serving as the Testament Union's surveillance through their generations. Hence, they came to hold a two-fold position: as landlords of the Far East and as knights of their own respective nations. Understanding that the knights do wish to avoid conflict with them, the Union has agreed to back their existence as the 'knight class' as well as their rights. With that, the knights have come into existence as landlords in the Far East. Do you understand?

Kimi: Are you thinking of starting this over from the beginning and making all of this in vain?