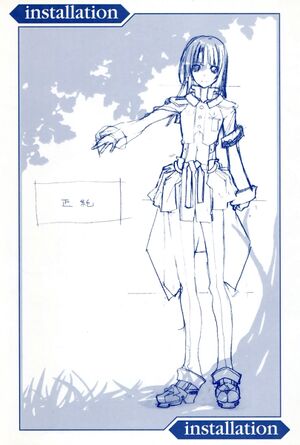 Historically, he and his father were quite resourceful.

His father even rose against Ieyasu, so he was an incredible person. 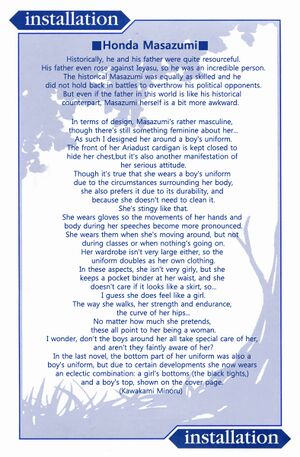 The historical Masazumi was equally as skilled and he did not hold back in battles to overthrow his political opponents.

But even if the father in this world is like his historical counterpart, Masazumi herself is a bit more awkward.

In terms of design, Masazumi's rather masculine though there's still something feminine about her...

As such I designed her around a boy's uniform.

The front of her Ariadust cardigan is kept closed to hide her chest,

but it's also another manifestation of her serious attitude.

Though it's true that she wears a boy's uniform due to the circumstances surrounding her body,

She also prefers it due to its durability, and because she doesn't need to clean it.

She wears gloves so the movements of her hands and body during her speeches become more pronounced.

She wears them when she's moving around, but not during classes or when nothing's going on.

Her wardrobe isn't very large either, so the uniform doubles as her own clothing.

In these aspects, she isn't very girly; but she keeps a pocket binder at her waist, and she doesn't care if it looks like a skirt, so...

The way she walks, her strength and endurance, the curve of her hips...

No matter how much she pretends, these all point to her being a woman.

I wonder, don't the boys around her all take special care of her, and aren't they faintly aware of her?

In the last novel, the bottom part of her uniform was also a boy's uniform; but due to certain developments she now wears an eclectic combination: a girl's bottoms (the black tights,) and a boy's top, shown on the cover page. 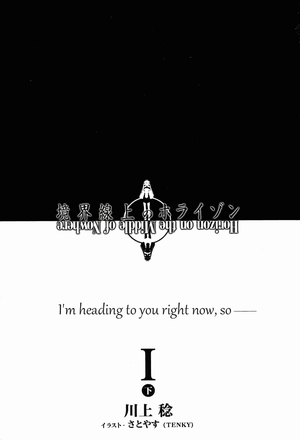 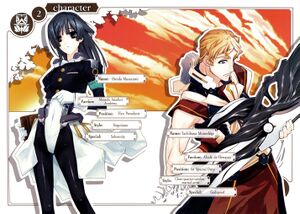 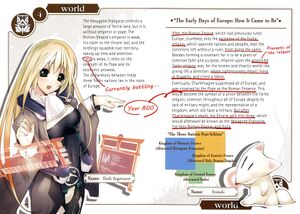 "The Early Days of Europe: How It Came to Be"

After the Roman Empire which had previously ruled Europe crumbled, only the existence of the Tsirhc religion which spanned nations and peoples kept the continent, left without a ruler, from doing the same. Besides forming a covenant for it to be a point of common faith and purpose, reliance upon the principled* Tsirhc religion was, for the broken and chaotic world, like giving life a direction: where righteousness meant living in frugality, and crime a taboo.

*Underlined, the precepts of the religion.

Eventually, Charlemagne suppressed all of Europe and was crowned by the Pope as the Roman Emperor. This would become the symbol of a union between the Tsirhc religion, common throughout all of Europe despite its lack of military might, and the representative of a kingdom which did have a military. But after Charlemagne's death the Empire split into three, which would afterward be known as the Hexagone Française, the Holy Roman Empire, and Italia.

The Hexagone Française controls a large amount of fertile land, but it is without emperor or pope. The Holy Roman Empire's emperor is weak, his claim to the throne lost, and the lordlings squabble over territory taking up time and attention. Italia* is weak; it relies on the strength of its Pope and its economic prowess.

The disharmony between these three Tsirhc nations lies in the roots of Europe. 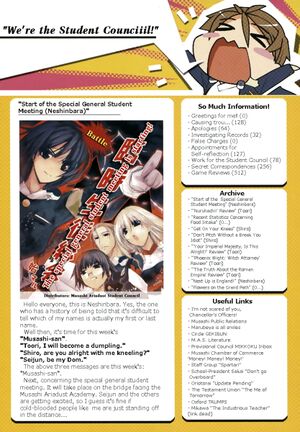 It's time to end this!

Hello everyone, this is Neshinbara. Yes, the one who has a history of being told that it's difficult to tell which of my names is actually my first or last name. Well then, it's time for this week's "Musashi-san":

"Toori, I will become a dumpling."

"Shiro, are you alright with me kneeling?"

The above three messages are this week's: "Musashi-san".

Next, concerning the special student body meeting. It will take place on the bridge facing the Musashi Ariadust Academy. Seijun and the others are getting excited, so I guess it's fine if cold-blooded people like me are just standing off in the distance...