Chapter 01: Participants in a Chance Meeting by the Storefront[edit] 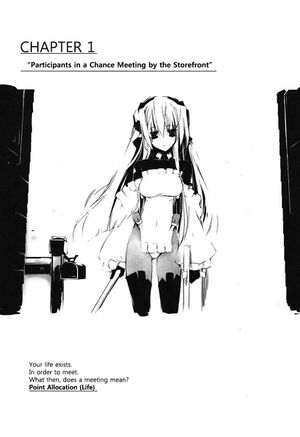 In order to meet

What then, does a meeting mean

Below the white sky, the mid-morning flows of people that streamed through the streets of Musashi were coming to an end.

Everywhere in the town people were transitioning to their work, which stretched from early morning to noon.

In the vicinity of central Tama, the café Blue Thunder had also entered into its pre-midday preparations. A string with a sign attached to it closed off the entrance to the eating area. Only the bakery section of the shop, which made use of the bread rack in front of the counter, remained open.

However, it was still too early for the morning to truly move into “pre-midday”. The female shopkeeper was still setting up inside the store.

“P-01s, you can leave once you clean da front of da shop with water. I’ll be expectin’ you in the evenin’.”

P-01s nodded and left the counter, moving outside.

There was a large road. The finishing touches to the roadtop had already been completed; the road was a place where people would pass by. Occasionally a two-wheeled wagon or carriage would pass by, shaking the road and the materials that made it up.

It was the time for work, but tourists could be seen here and there.

“Judging from the situation, we will soon be at Mikawa. The city is coming alive.”

P-01s muttered. Using her personal functions P-01s thought of Mikawa, which she had not seen for so long.

…Once every year they came to Mikawa, the site of her beginning.

Musashi takes one year to circle the island of the Far East once. It docks at the residential areas scattered everywhere, delivering and selling goods; but according to the shopkeepers even one year was not enough to circle the Far East.

It seemed that P-01s had boarded Musashi from Mikawa last year.

…When she had first realized it, she was standing in one of Tama’s roads.

Someone had registered her as a citizen. She was allowed life due to the fact that the proof of citizenship that she carried was real and because the shopkeeper of the café had called out to her in the beginning and became her guardian.

What P-01s was thinking of now was the question that she had kept in her mind since then:

…Where does the product P-01s come from?

The shopkeeper had talked with businesses and offices multiple times, but she was not one of their products. Neither were there any lost items nor missing person requests for an automaton.

“I can see IZUMO’s or the English method in your construction…but much still remains unclear.”

This was according to the technician who had examined her. When she heard “much still remains unclear,” the shopkeeper had tilted her head; but what the technician was saying referred to the fact that automatons were amalgamations of ability and machinery, and though they are industrial products there is a lot of secrecy involved in their construction. In other words, she was an amalgamation of obscurity. Furthermore, the technician said this:

“Her soul is in her throat.”

She heard that automatons were dolls in which human souls resided.

Dolls did not move by themselves; but when souls that were able to absorb ether (the power of the ley lines) resided in dolls, they set drive systems and other similar mechanisms moving.

In her case, a component that seemed like a soul existed in her throat at the base of her voice box.

“The thoughts and emotions of some great lady somewhere probably live in dat ornament.”

This was according to the shopkeeper; but the truth was unknown to her.

What she knew was that she was an automaton without memories of her owner.

P-01s brought her hand to face the tap in front of the shop, beside the door.

Using gravity control, she moved the pail under the tap without touching it.

Gravity control was a racial power unique to automatons. It was a necessary power for souls that resided in something to be able to move that in which it resided to make contact with its surroundings, so automatons by nature principally used this power to serve people.

Placing her body close towards the road, she filled the pail beyond her outstretched hands with water and pulled it closer to her.

She splashed water on the path using a ladle.

This was something she always did: Once every morning, once before noon, and once in the evening.

…Speaking bluntly, I can guess that I am merely escaping.

The moment she thought of this…

A voice could be heard.

Small, black, round things were piling up from out of the ground at the edge of the road.

With the pail of water in hand, P-01s approached the direction from which the voices came:

The corner of the store’s lot. The gutters by the roadside.

Because it was connected with the sewage system, wooden lids always covered the gutters. However, when she lifted up the lids a black, round thing around five centimeters across poked out from below.

Its black figure looked like a clump of fur that had been matted with muddy water.

…However, according to their personal statements they were algae.

Like a creature of some sort, the algae clung to the edge of the gutter with the bottom of its spherical body. It used its sensory organ to look around the area.

They knew that if they came out from the sewers and gutters people would hate them.

Despite this, they came here. There was a reason for this.

“Has the sewage stagnated again?”

“Yes, again, a little; but some water will do it.”

Looking at it, the black algae’s body was slightly dry. P-01s judged that it was lacking water.

This was an area where the sewer pipes twisted. Because each ship of the Musashi was gigantic, the inner components fought an eternal battle attempting to find a way to absorb the deformities of the outer shell.

The black algae creatures wanted their food, the sewage. However, because the flow of the sewage had slowed down, stagnated and gotten stuck, someone had to use a brush to force out the stagnation and blockage.

Originally, this task should have been the responsibility of one of the managers in the public offices.

“Nobody does others probably serious.”

Narrowing its sensory organ eyes, it let the water seep in fully.

It twisted below the gutter. The next one came out.

P-01s nodded and poured water on it.

The next came, and the next. This continued as they kept coming.

The seventh of them bathed in the water. The seventh creature thanked her and made to dive into the gutter. But differently from the others, it said this before diving inside.

Having been asked this, P-01s tilted her head to the side. There was a smell. It was the smell of sewage. Because they were sticking their bodies slightly out from below the gutter, only she had noticed; but if the black algae creatures came out completely, the surrounding stores would notice. The truth was clear. Therefore, P-01s said this:

“Judge, to speak bluntly, it stinks.”

The black algae creature asked why, given that it smelled, she talked with them.

“Always helping but others until now got in trouble said no why?”

“Your smell is not something that is given off because you are trying to hurt others. It is originally a smell that P-01s and the others created. You do not completely come out of the gutters, making sure that the smell does not spread. Speaking bluntly, because of this… P-01s has no reason to deny you.”

So, the black algae creature said:

“Judge, if that is what you call a relationship where two beings acknowledge each other.”

Hearing P-01s’s words, the black algae creature remained silent for a moment. However, after a few seconds the creature said this:

The black algae creature compressed its body, as if to nod.

The creature left and the lid to the gutter closed.

As if in its stead, a figure fell.

The figure was a human. The black male school uniform was that of the Musashi Ariadust Academy.

However, the slender frame of the figure with fairly long black hair swayed before suddenly falling to the ground. The figure fell flat, but the knees did not hit the ground.

A thump rang out and a cloud of dust rose up.

…Does the fact that a cloud of dust rose up imply that not enough water has been spread over the ground?

Thinking this, P-01s called out the store.

“Shopkeeper, there is a customer. To speak of what she looks like, Masazumi-sama is as always…on the brink of starving to death.” 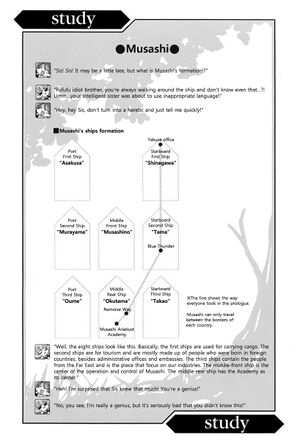 Toori: “Sis! Sis! It may be a little late, but what is Musashi’s formation!?”

Kimi: “Fufufu idiot brother, you’re always walking around the ship and don’t know even that…?! Umm…your intelligent sister was about to use inappropriate language!”

Kimi: “Well, the eight ships look like this. Basically, the first ships are used for carrying cargo. The second ships are for tourism and are mostly made up of people who were born in foreign countries, besides administrative offices and embassies. The third ships contain the people from the Far East and is the place that focus on our industries. The middle-front ship is the center of the operation and control of Musashi. The middle-rear ship has the Academy as its center.”

Toori: “Heh! I’m surprised that Sis knew that much! You’re a genius!”

Kimi: “No, you see, I’m really a genius, but it’s seriously bad that you didn’t know this!”