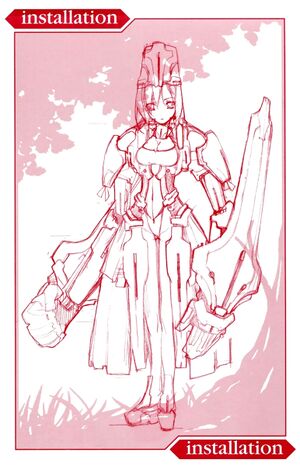 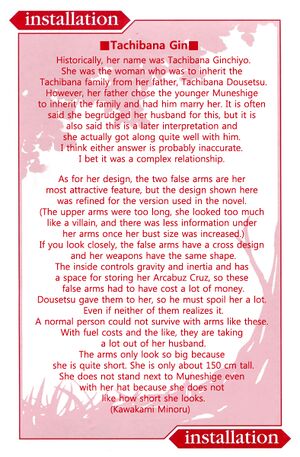 Historically, her name was Tachibana Ginchiyo.

She was the woman who was to inherit the Tachibana family from her father, Tachibana Dousetsu.

However, her father chose the younger Muneshige to inherit the family and had him marry her. It is often said she begrudged her husband for this, but it is also said this is a later interpretation and she actually got along quite well with him.

I think either answer is probably inaccurate. I bet it was a complex relationship.

As for her design, the two false arms are her most attractive feature, but the design shown here was refined for the version used in the novel. (The upper arms were too long, she looked too much like a villain, and there was less information under her arms once her bust size was increased.)

If you look closely, the false arms have a cross design and her weapons have the same shape.

The inside controls gravity and inertia and has a space for storing her Arcabuz Cruz, so these false arms had to have cost a lot of money.

Dousetsu gave them to her, so he must spoil her a lot. Even if neither of them realizes it.

A normal person could not survive with arms like these. With fuel costs and the like, they are taking a lot out of her husband.

The arms only look so big because she is quite short. She is only about 150 cm tall.

She does not stand next to Muneshige even with her hat because she does not like how short she looks. 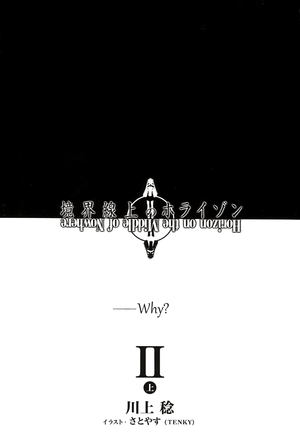 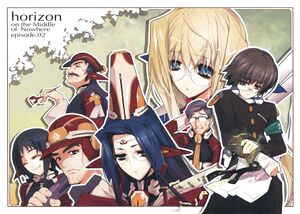 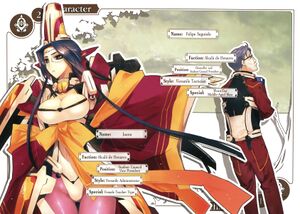 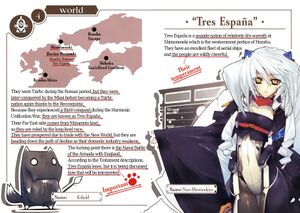 Tres España is a seaside nation of relatively dry warmth at Shimonoseki which is the westernmost portion of Honshu.

They have an excellent fleet of aerial ships and the people are wildly cheerful. ←Their temperament

They were Tsirhc during the Roman period, but they were later conquered by the Mlasi before becoming a Tsirhc nation again thanks to the Reconquista.

Because they experienced a third conquest during the Harmonic Unification War, they are known as Tres España.

Their Far East side comes from Minamoto land, so they are ruled by the long-lived race.

They have prospered due to trade with the New World, but they are heading down the path of decline as their domestic industry weakens.

The turning point there is the Naval Battle of the Armada with England. According to the Testament descriptions, Tres España loses, but it is being discussed how that will be interpreted.←Important 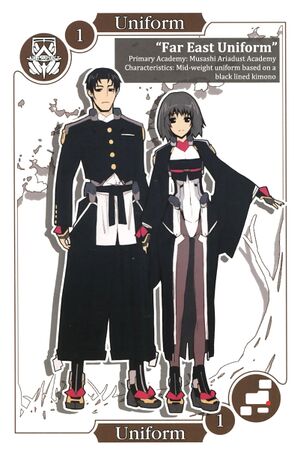 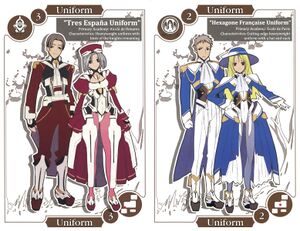 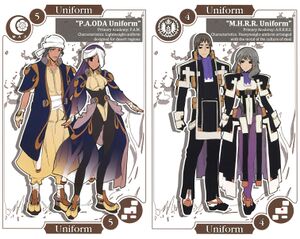 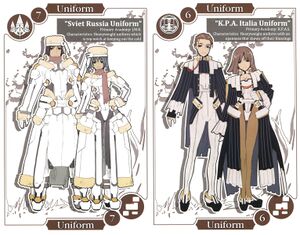 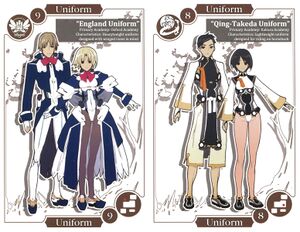 Characteristics: Mid-weight uniform based on a black lined kimono

Characteristics: Cutting-edge heavyweight uniform with a hat and such

Characteristics: Heavyweight uniform with hints of the knights remaining

Characteristics: Heavyweight uniform arranged with the metal of the culture of steel

Characteristics: Heavyweight uniform with an openness that shows off their blessings

Characteristics: Heavyweight uniform which is top notch at keeping out the cold