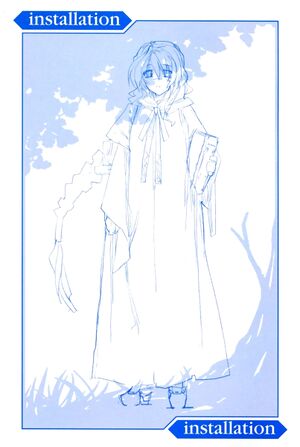 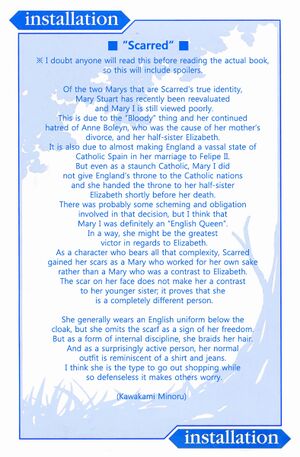 Of the two Marys that are Scarred’s true identity, Mary Stuart has recently been reevaluated and Mary I is still viewed poorly.

This is due to the “Bloody” thing and her continued hatred of Anne Boleyn, who was the cause of her mother’s divorce, and her half-sister Elizabeth. It is also due to almost making England a vassal state of Catholic Spain in her marriage to Felipe II.

But even as a staunch Catholic, Mary I did not give England’s throne to the Catholic nations and she handed the throne to her half-sister Elizabeth shortly before her death. There was probably some scheming and obligation involved in that decision, but I think that Mary I was definitely an “English Queen”. In a way, she might be the greatest victor in regards to Elizabeth.

As a character who bears all that complexity, Scarred gained her scars as a Mary who worked for her own sake rather than a Mary who was a contrast to Elizabeth. The scar on her face does not make her a contrast to her younger sister; it proves that she is a completely different person.

She generally wears an English uniform below the cloak, but she omits the scarf as a sign of her freedom. But as a form of internal discipline, she braids her hair. And as a surprisingly active person, her normal outfit is reminiscent of a shirt and jeans.

I think she is the type to go out shopping while so defenseless it makes others worry. 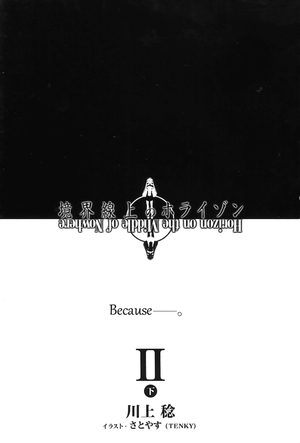 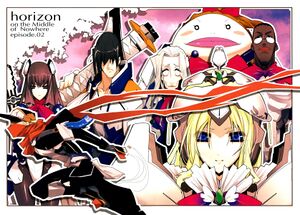 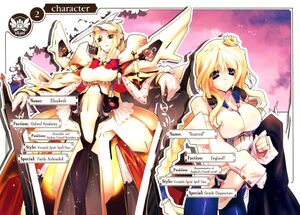 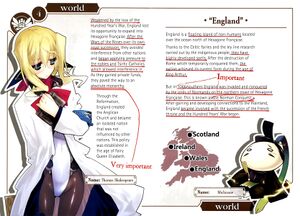 England is a floating island of non-humans located over the ocean north of Hexagone Française.

Thanks to the Celtic fairies and the ley line research carried out by the indigenous people, they have highly developed spells. After the destruction of Rome which temporarily conquered them, the nation achieved its current form during the age of King Arthur.

But in 1066←Important, southern England was invaded and conquered by the lords of Normandy on the northern coast of Hexagone Française. This is known as the Norman Conquest.←Important

After gaining and developing connections to the mainland, England [underline]became involved with the succession of the French throne and the Hundred Years’ War began.

Weakened by the loss of the Hundred Year’s War, England lost its opportunity to expand into Hexagone Française. After the Wars of the Roses over its own royal succession, they avoided interference from other nations and began applying pressure to the nobles and Tsirhc Catholics which allowed interference in. As they gained private funds, they paved the way to an absolute monarchy.←Very Important

Through the Reformation, England created the Anglican Church and became an isolated nation that was not influenced by other nations. This policy was established in the age of Fairy Queen Elizabeth. 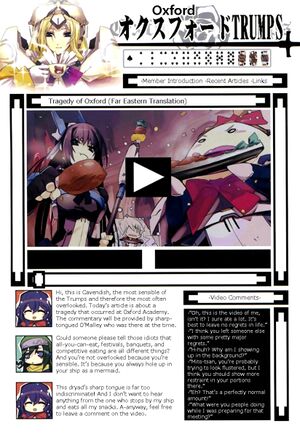 Cavendish: Hi, this is Cavendish, the most sensible of the Trumps and therefore the most often overlooked. Today’s article is about a tragedy that occurred at Oxford Academy. The commentary will be provided by sharp-tongued O’Malley who was there at the time.

O’Malley: Could someone please tell those idiots that all-you-can-eat, festivals, banquets, and competitive eating are all different things? And you’re not overlooked because you’re sensible. It’s because you always hole up in your ship as a mermaid.

Cavendish: This dryad’s sharp tongue is far too indiscriminate! And I don’t want to hear anything from the one who stops by my ship and eats all my snacks. A-anyway, feel free to leave a comment on the video.

“I think you left someone else with some pretty major regrets.”

“H-huh? Why am I showing up in the background?”

“Mito-tsan, you’re probably trying to look flustered, but I think you should show more restraint in your portions there.”

“What were you people doing while I was preparing for that meeting?”