Chapter 01: Members of the Vermilion Field[edit] 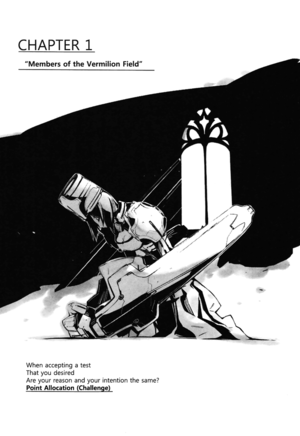 When accepting a test

Are your reason and your intention the same?

The ceiling was round.

It was a broad, white ceiling made of stone.

The walls supporting it had colorful patterns of glass embedded in them which allowed the midday sunlight in. Below the ceiling was a level floor with a red line running down the center.

It was a great hall. The red line of a carpet ran across a floor of white stone.

A single figure was in the center of that red carpet that bisected the round hall.

It was a girl. She wore a vermilion uniform and sat with her legs underneath her. She did not have human arms from the shoulder on. Instead, she had giant metal arms. They occasionally made small noises as she placed her fists on the carpet as if to support herself.

At the end of the carpet both in front of and behind the girl were passageways and large double doors. The door behind her was made of black wood and the one in front of her was decorated in gold.

The girl stared at the floor with her head hanging down.

She had heard a noise. The door behind her had opened slightly and she had heard footsteps entering the hall.

She turned around and saw a man who looked like a businessman. He had a mop and wooden bucket in his hands.

The man was past middle-age, wore glasses, and had removed his worn-out jacket. He gave a small nod when he noticed the girl. He proceeded to soak the mop in the bucket, wring it, and mop the edge of the hall as if he were drawing a semicircle.

The girl followed him with her gaze until he reached the door in front of her.

That decorated door suddenly opened inward. At the same time, a female student acting as a lady-in-waiting spoke up.

The door opened without a single creak. The only sound was the movement of air. Someone walked out into the center of the hall through that door.

This person was a woman who nodded in thanks to the girls who opened the double doors from either side and then passed through. She was tall and wore a vermilion uniform. Her name was Juana and the guard-covered ears that proved she was of the long-lived race shook a bit as she walked. She walked with long strides that made her black hair flow behind her and the sharp eyes behind her black glasses looked toward the girl on the floor.

“Tachibana Gin,” said Juana after stopping a few steps in front of her. “You understand why you were called here as soon as you returned from Mikawa, do you not?”

“Testament,” replied Gin while still hanging her head down.

Juana immediately said, “Alcalá de Henares’s officers and Student Council have decided to revoke one inherited name of the 1st special duty officer who has inherited the name Garcia de Ceballos and Tachibana Muneshige. The latter shall be revoked.”

“The name Tachibana Muneshige shall be given to another qualified student.”

Gin remained silent and continued staring at the floor as she listened to Juana.

She thought of him as he still slept while healing from that battle about two weeks ago. When they had arrived at A.H.’s land port, his entire bed had been immediately transported to the medical institution. However…

He would no longer be Muneshige. The reason for that was obvious.

He held the name of the warrior known as the Peerless in the West, yet he had lost and his Logismoi Òplo had been taken.

They of course had their responsibility as a major Testament Union nation which possessed a Testament, but Tres España also supported its economy with investments from other countries. Anything that made them look weak would make others hesitant to invest. By stripping Muneshige of his inherited name and giving it to someone else, they were saying this had been Muneshige’s mistake and not theirs.

The man who had been her husband would become a stranger and someone else would take that position.

Meanwhile, a noise came from Juana in front of Gin. Juana had pulled a document case from beneath her skirt. She pulled out a few documents and charms with the corners lined up.

“As you can see, the paperwork is in order.”

“What is it?” responded Juana.

Juana’s tone said to stop, but Gin did not hesitate to speak.

“I would like permission to head out to the front line.”

“Testament. Because we must obtain victory over Musashi Ariadust Academy.”

“Tes,” said Gin with a nod. When she opened her mouth, she spoke what had been on her mind during the two weeks in Mikawa and the voyage here. “Tres España was repelled by the Far East. We must show the world that was a mistake.”

“That does not require you to fight, does it?”

“I see you do not deny we will attack Musashi. Do the officers and Student Council see something in Musashi regarding the approaching battle against England?”

Once she finished speaking, Gin listened. She heard Juana send a small laugh to the floor.

And so Gin continued speaking.

“I would like permission to join the ranks of those taking revenge on Musashi and reclaiming the Logismoi Òplo.”

“But you are weaker than Tachibana Muneshige, are you not?”

“Testament,” immediately replied Gin. She took in a breath. “If I am able to defeat Musashi Ariadust Academy, it will prove that it was ‘some kind of mistake’ that the 1st special duty officer who is stronger than me lost. I will head out and win. That will repay the debt incurred by Tres España.”

Her two weeks’ worth of thought was initially met with silence from Juana. But finally, Gin heard the woman adjust her position a bit.

As soon as Juana began to speak, a sudden noise came from behind Gin.

A sharp sound came from the large door as if it was being split open.

However, this noise was not that of the door being opened. It was…

…A rapping noise. And those appear when…

Gin sensed four people approaching from behind her. She turned around to look at them.

Two of them spoke first. One was a short man and the other a woman a head taller.

The man’s uniform had been modified for baseball, his skin was nicely tanned, his body had a firm build, he wore a brimmed helmet, and he carried a sports bag and a cylindrical leather case taller than he was.

The tall woman was of the long-lived race, she wore a track suit, and she held a light board.

And there was one point in common between the two of them.

Their feet grew blurry and then invisible.

Following behind those two was a boy and girl. The girl was younger and she waved her hand.

“Hiii! The navy pitcher of the baseball team, Flores Valdés of the Bungo Navy, is here! I see the floor is nice and clean!”

The boy with long blond hair standing next to her gave a deep nod.

“Sister, I am glad you have so much energy, but I cannot approve of coming so dangerously close to a pun such as saying ‘floor is’ so soon after your name. You need to find a better way of showing off how cute you are.”

“Okay, I get it, so how about you die, brother? Oh, my brother Pedro Valdés is here too, as you can see.”

“Testament,” said Juana with a nod.

The four walked in, but their gazes stopped on Gin.

“Oh, would you look at that. It’s the Tachibana wife. You made it back. So, let’s see… Miss Juana’s here, but old man Vela isn’t.”

The door in front of Gin cracked open and a long-lived man’s face poked out. He was a lean man with a mustache and paint on his cheek. He frowned and turned toward Takakane.

“Don’t be stupid. There’s a lot you only understand once you’re old. Like how many enjoyable things there are in this world.”

“Oh? For once, I agree with you. The Tres Españian way to live is to use the money you have, give in to your passions, have a party, and forget everything unpleasant.”

After a wave from a paintbrush-holding hand, the door closed and Takakane glanced around.

As he trailed off, Fusahide elbowed Takakane in the side again. He glanced over at Gin, lowered his eyebrows and brought his hands together.

“Taka-san that means he’s dead. Also, we’re Catholic, so you don’t have to bring your hands together.” 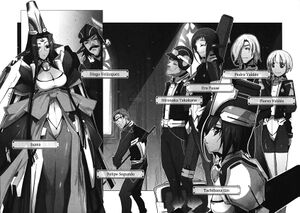 Fusae gave a bitter smile and Juana asked her a question.

“We have some bad news and some not so good news. Which do you want first?”

“2nd special duty officer, you tell me instead.”

“Chehh,” pouted Takakane as Fusae looked down at the papers held in her light board.

“First, P.A.Oda has finished its attack on Asai. With this adjustment within their territory, it is thought their external activities will grow more intense from now on.”

“If P.A.Oda has secured a foothold, the neighboring Qing-Takeda should be under a lot more tension. Not to mention Hexagone Française who also have M.H.R.R. in Hashiba to worry about,” said Juana.

“During our return, the Papa-Schola said Musashi is a ‘going’ threat and P.A.Oda is a ‘coming’ threat.”

“He was telling us to be careful, but also admonishing himself. K.P.A. Italia borders M.H.R.R. just like Hexagone Française. And as a Catholic nation, we are not completely unconnected to K.P.A. Italia.”

“And the other news?” asked Juana.

“Testament. It seems Musashi has been detected in the sky to the west. They have likely lessened their stealth mode in preparation to placing a course marker. Most likely they are performing the marker checks so the Testament Union can’t take advantage of it, and otherwise remaining in stealth mode except when in port. That seems to be why they have been moving so slowly.”

Gin lightly clenched her back teeth when she heard the word “Musashi”. Juana nodded and took a breath.

“We need to contact the chancellor and Student Council president.”

“Tes,” replied everyone else, but Juana frowned.

“But where has he gotten? I have not seen him for a while.”

Gin, Takakane, Fusae, and the Valdés siblings pointed behind Juana.

As Juana turned around, Gin could see the middle-aged man in worn-out clothes mopping the passageway beyond the large ornamented door.

A few seconds after Juana saw the man bending over and polishing the floor, her ears stood up.

The glasses-wearing, middle-aged man turned around in the passageway as if embracing the mop.

Juana quickly and loudly walked over with long strides.

“What do you think you are doing!? Tres España is in a crisis and you are the chancellor, the Student Council president, and Felipe Segundo!”

“Y-yeah, but you seemed to be handling all the work pretty well, Juana-kun. This is really all I can do…”

“That is not the issue there! Listen…”

As a lecture began echoing down the passageway, Gin turned toward Takakane and Fusae.

Takakane was watching the middle-aged chancellor obediently respond to the lecture.

“She’s always so strict when it comes to him.”

“I know,” agreed Fusae who was a head taller than Takakane.

That is the opposite of Muneshige-sama and me, thought Gin as she watched them.

When she stood up and turned around, Fusae spoke to her.

“What will you do, Gin-chan? You want to head out and fight, don’t you? When you do, we should be pretty helpful as the leader on land and the leader on sea.”

Gin used a single word to respond. She nodded and returned the woman’s gaze just as she heard Juana’s voice continue the lecture.

“You need to pull yourself together! Honestly!”