Chapter 41: Attackers in the Dark Forest[edit] 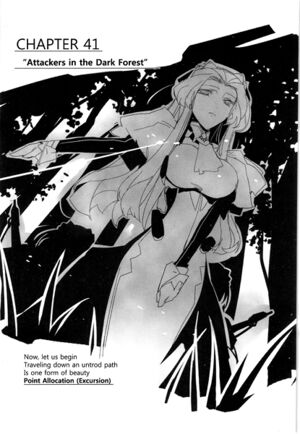 Traveling down an untrod path

Is one form of beauty

In a candy house, a dining table was covered with piles of used plates and a wine glass was added to it.

However, the person to which the Reine des Garous held out the bottle was leaned back in his chair and did not move.

“Oh? Did you fall asleep, Musashi Chancellor? How defenseless. And in front of the Reine des Garous no less.”

She laughed quietly, brought a hand to her cheek, and smiled deeply.

She circled around to the boy in the chair and brought her face to his throat.

It was a still night and her non-human hearing detected the pulse in his carotid artery.

“Heh heh. You ate well and now you’re sleeping well. …You must have been exhausted.”

She brought her hands to her hips and stood up.

“Honestly, do Musashi’s students understand how exhausted he gets even if it only looks like he’s doing stupid things?”

She pushed the table out of the way with her butt, moved in front of the boy, opened his clothing from collar to navel, and gave a crescent moon of a smile.

She focused her ears toward the house’s entrance and looked to the north.

“Heh heh. The forest is noisy tonight. Quite a bit must be headed this way.”

She placed a hand on the boy’s shirt and smiled.

“They’re still outside my territory, but how about I watch a little bit before taking this boy.”

The first thing to fill the forest night was a gunshot.

There was no moonlight and barely any starlight below the broadleaf trees where shadows overlapped. The gunshot raced up from below a rising slope.

Next, a firing line of ten all fired in the same direction.

They aimed at the center of the slope where they had sensed their target.

They continued firing on that location for ten full seconds.

“…” As soon as they finished, a group of shadows moved below the trees.

They split into three teams. One fell back a bit to act as the rear guard and command unit. The other two circled to the left or right of the slope. Their enemy was in the center of the slope, so they intended to flank the enemy on both sides at once.

The ones moving left had rearranged their bodies to be right-handed and the ones moving right had done the same to be left-handed. This allowed them to constantly aim their guns at their target.

As they rushed through the forest, they searched for their enemy by heat and sound rather than vision. They also avoided speaking. They could use their automaton shared memory to rapidly exchange thoughts.

Even now, they were confirming each other’s positions via thoughts instead of words.

“Testament,” the other teams replied to the center team.

But shortly thereafter, an especially loud report reached them.

“Okay, this is Mouri-01. Everyone, Mouri-02’s unit has reached us, so I will now command both units. Please keep that in mind.”

Two teams had split off from her unit for the pincer attack up ahead. To assist, Mouri-02’s unit had also split into three teams with two sent after the other two teams sent ahead. So…

The responses came in almost simultaneously and Mouri-01 gave them silent praise from the central team.

When she had come to the Mouri clan, she had never expected to be given combat work as well, but…

…We can handle this with the proper training and knowledge.

Thanks to the instructions of Henri, Armand, and Isaac of the Three Musketeers and their familiarity with the forest due to their princess’s love of taking walks through the mountains, after only two years in Mouri, all of the maid dolls had been able to traverse the forests covering eastern Hexagone Française alone and with no equipment.

In a group of three, they could accomplish reconnaissance and delaying missions.

“Mouri-97 of R2 here. I have detected a large group of framboise in this area. Permission to pick them?”

“Only if you use your spare hand while remaining in motion.”

“Testament,” they all replied.

A few reports of successful harvests came in afterwards.

Mouri-02 was silent even in their shared memory, but she seemed to have found a similar clump of fruit behind the central team. Mouri-01 decided this was a good thing and that the girl had changed since being dragged around by the princess.

“But everyone, show some restraint and do not pick too many. The forests of Hexagone Française belong to the spirits. Disturbing them is strictly forbidden.”

While they all replied with “testament”, the central team prepared their rifles.

The bullets they used were muzzle loaded in accordance with the history recreation’s rules. They could control the loading and firing with their gravitational control as automatons, so they could fire quite rapidly even with a normal gun. As for the materials used for the bullets…

“Mouri-01, this is Mouri-236. I have reconfirmed the makeup of the soil in this area. The rain last month has changed the soil since the last survey. Raising the acidity of the bullet composition by 2% should speed up the compost rate of the used bullets.”

Dirtying the land would turn the spirits against them.

…And then we would lose the cooperation of the Reine des Garous and other local non-humans.

And if the spirits avoided the people, their blessings would naturally no longer reach the people.

This was why it had long been said to be very careful when fighting in a spirit forest.

…And that is why it has become a job for Belle de Marionnettes like us.

When moving through the forest, they could avoid speaking while also confirming each other’s positions and maintaining order. Automatons were likely the only beings that could do that outside of the non-humans who lived in the forests.

However, the combat automatons could not do that. Henri’s giant swords and Armand’s extreme gravitational control were bad enough, but Isaac’s shellfire would destroy the forest down to its roots.

And that is why we do it, thought Mouri-01 as she gave instructions.

“Everyone, compress the bullets within 2% acidic soil. Our previous shots were a response to sudden movement, but this will allow our used bullets to be absorbed into the ground. Also, R1 and L1, have you detected the source of that sudden movement?”

“Testament. R1 is investigating. …The sound is gone. No heat source.”

“Testament L1 is investigating. …The sound is gone. No heat-…”

L1 was cut off before finishing.

“R1 has a correction! There is a heat source!”

Something quickly rose on the bullet-riddled slope.

It was a shadow and it sank down for an instant.

Wind wrapped around it, and it leaped down the slope toward the central team.

The automatons reacted calmly. Just as the enemy shadow leaped down the slope, the central team simply confirmed its presence and left the direct interception to R2 and L2 who were moving to the right and left.

The next to move were R1 and L1 who had moved ahead and reached about the same height as the point the shadow had leaped from. They calmly fired in a fan shape along the slope where it had jumped from as well as above and below that.

Down below, Mouri-01’s C1 team finished confirming the shadow in the air ahead of them.

At the same time, that enemy shadow was suddenly stopped.

Mouri-02 stood at the lead of C2 which had caught up from behind.

She had used accurate gravitational control to fire a wooden skewer as a high-speed counterattack.

Gravity had compressed the tip of the wooden skewer that stabbed into the shadow as gunfire from either side poured into it.

Mouri-02 twisted her right wrist and the skewer was forced into the enemy.

The impact caused the shadow to burst, but the way it scattered and the sound it made told Mouri-01 something.

The scattering shadow was indeed a fallen tree, yet it also had definite heat.

…What is this heat source!?

Mouri-01 soon realized what it was. A mass of heat she determined was a hot stone spilled from the scattering splinters.

Just as she determined the enemy had put it there, the other automatons’ thoughts shouted to her.

Suddenly, new shadows appeared beyond them all to the right and left.

Two movements raced through the underbrush and the automatons defended against the shadows moving down the slope.

The automatons on the outer edges of the teams used their gravitational control to lift the ground on either side.

They created barriers of earth between them and the shadows descending on either side.

It was enough to defend, but something suddenly appeared over the heads of R1 and L1.

But it was not just one. Countless heat sources poured down on their heads.

They jumped down into the hot air created by the water dumped on the cold air and cold automatons. Tenzou had boiled the water in a ninja tool known as a paper bucket, Mary had asked the water spirits to keep it hot, and Naito had cut off the path of the escaping heat with a reduction spell.

The forest had very few heat sources, so what happened to steam or the people surrounded by it?

The confused automatons turned toward each other.

Of course they would do that, thought Mary.

And the heat of the scattering steam would form a mist and make their vision uncertain.

Tenzou and Mary had prevented the enemy from using their eyes.

…Now we only need to seal off their auditory senses!

When Mary landed, she waved her skirt to make a loud noise.

The automatons looked over in surprise, so they had likely switched from thermal sensing to auditory sensing.

That made her happy, but a voice behind her seemed to push her onward.

It was Naito’s voice from far up the slope.

That signaled the completion of her spell.

Everything in the forest shook and cried out.

More accurately, Naito’s acceleration spell had created a straight line wind that shot through the forest’s trees and their branches. Instead of moving the air, the spell simply accelerated and released it.

…But if the branches shake enough…

The wind struck all the trees in an area one hundred meters long and thirty meters wide.

The forest shook. Trees tilted, branches collided, and leaves sounded like a heavy hand was striking them.

The blowing roar grew and pressed in on the ears of the automatons using auditory sensing.

The heat sources had been disturbed and now the sound was too confusing.

But the automatons knew an enemy was here, so they had to do something.

However, they could not escape and put some distance between them due to the wall they themselves had created.

And then Mary shouted out.

The shadow that had raced down the slope on the outside sounded like it kicked off the underbrush.

The shadow that flew into Mary’s raised hand was the left half of the original Excalibur.

Mary crouched down but used her full strength to swing her divine weapon.

She charged at the enemy. 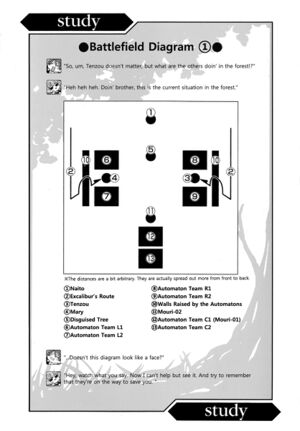 Toori: So, um, Tenzou doesn’t matter, but what are the others doin’ in the forest!?

Kimi: Heh heh heh. Doin’ brother, this is the current situation in the forest.

*The distances are a bit arbitrary. They are actually spread out more from front to back.

10. Walls Raised by the Automatons

Kimi: Hey, watch what you say. Now I can’t help but see it. And try to remember that they’re on the way to save you.