Chapter 67: Searcher in the Metal Tower[edit] 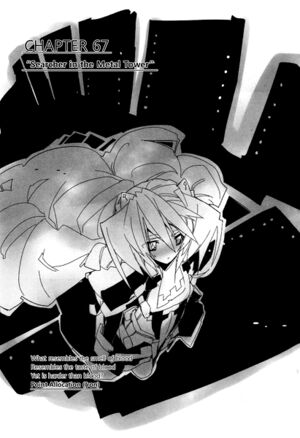 What resembles the smell of blood

Resembles the taste of blood

Yet is harder than blood?

The imprisoning tower was made of iron. The floors, walls, staircase, hallways, and even the chairs in the landings were all made of hard metal.

“They certainly were thorough.”

Mitotsudaira heard her voice and footsteps echoing through the metal spiral staircase. The well-built female guard at the entrance had insisted they enter one at a time, so she had gone in alone.

…I knew it was meant as a prison, but I didn’t expect it to be this sturdy.

The torches and the cloth covers on the chairs were the only non-metal materials. The only other things not made of metal were…

…Me as I climb the stairs, and…

Occasionally, she would see someone collapsed on the landings or in the chairs placed in the viewing hallways.

Their clothes were disheveled, their skin exposed, and they were gasping for breath.

She could easily hear the heavy breathing and faint voices in the quiet hallways and staircases. The gentle voices echoed off the walls with an intoxicated quaver to them.

Mitotsudaira very nearly stopped walking, but she instead quickly moved past those women while briefly glancing over at them.

…N-negotiate! I need to negotiate! He’ll understand if I explain the situation!

But what if he demanded her body in exchange for the memo?

She had prepared herself for this from the moment she volunteered to go. This was not a knight’s job, but a knight could not allow her king or another lady to be defiled.

But even so, she was certainly not enthusiastic about this job and had only volunteered by process of elimination.

That may have been why he had spoken to her as she had started to regret her decision.

“Hey, Nate. You don’t have to go, you know? I’m not gonna force anyone to do something they don’t want to. …Hey, Tenzou. Drinks. Three minutes, okay?”

“Y-you’re contradicting everything you just said!”

But once Tenzou returned with drinks in paper cups he had bought at the Thales-style vending machine located next to the tower, Mitotsudaira had taken one and spoken to the idiot.

“What do you mean I don’t have to go? If I don’t, we won’t get this material on the Princess Disappearances. Not to mention that Hexagone Française asked us to perform this investigation.”

“Don’t worry about it, don’t worry about it.” He had waved his hand dismissively. “You know that thing that sounds like a tragic event from a porn game? Was it called the Sack of Magdeburg? Well, once it’s over, this Rud-whatever guy will go away, right? I’m sure the entire tower will be abandoned, but we can always have that cruel merchant buy the memo afterwards. Or if he takes it with him, we can search him out, have Itoken exercise with him, and get it that way. He apparently loves Technomagie, so Itoken might get a bit dispelled, though.”

“If that happened, I think our class would get a little less chaotic.”

As they had spoken, she had started feeling more inclined to go. It was less about knowing she did not have to go and more about knowing her king was worried about her. She felt honored but also felt inexperienced for making him worry.

“So I suppose I came here to prove I’m a proper knight.”

She sighed as she climbed the stairs.

…Did they say this tower is five hundred meters tall?

She could see the distant landscape out the occasional arrow slit or window. She could tell she was climbing higher because that landscape grew wider and wider.

There had been an elevator that used spirit spells on the first floor, but she had chosen not to use it when she did not know where it would take her. There were elevator entrances on each consecutive floor, but they seemed to be for the residents in the waiting rooms and required special keys to unlock. In other words, she had made the wrong decision at the very beginning.

…How long has it been since I climbed this high on foot?

Musashi’s total height was about one hundred sixty meters. She would run up to Musashino’s bridge during training, but she decided she needed to train more in vertical movement.

She sighed again, placed both heels on the floor, and gathered her strength.

She looked to the wall and saw a metal plate that said “Not far now to Chancellor Rudolf II’s room!”

And after she finished climbing that flight of stairs…

The hallway ahead curved gently and ended with only an elevator entrance and a large metal door.

Mitotsudaira sighed yet again and took a light step straight up.

She jumped, landed, and realized her body was a bit weak.

It was partially due to the extent of the climb, but it was also true she had rushed a little too much. At any rate, she checked the elevator and peered down from the window.

She was only able to think that due to the view she normally had from the Musashi. She also felt more relaxed than when closer to the ground, but that too may have come from being a resident of Musashi.

…There was a time when I constantly told myself I wasn’t one.

She exhaled, breathed in new air, reached for the knocker on the large door, and told herself she needed to give a proper greeting as Musashi’s representative.

She pulled back the knocker and swung it forward.

But that light action was enough to move the large door before she could knock.

The door opened and darkness spread out before her eyes.

Not only had it not been locked, but it had not been properly closed. Pulled by the opening door and the knocker, she took a few steps into the room. And…

But then her nose detected a certain scent: blood and other bodily fluids.

All of her body’s hair bristled because this scent did not come from a cow or a pig; it was a human scent.

She smelled human blood, human flesh, and the fluids released when human organs spilled out, but it was far too much to come from a single person.

To put up her guard, she quickly began to move back, but her back struck something.

It was the door. Once she realized the door had closed at some point, a tremor of caution filled her body. This was undoubtedly a dangerous situation, so she crouched down and swiftly turned her senses to her surroundings.

The room was just below thirty meters across. It had no windows and it had what looked like a giant bed in the center, but something else concerned her more.

…What is this scent?

There was more here than just the smell of bodily fluids like blood and sweat. A strong, familiar scent was mixed in with the metallic smell covering the walls and everything else.

It was the type used on weapons and it was a constant smell aboard the Musashi.

Just as she wondered why the room smelled so strongly of it, a sudden light reached her.

A light panel using holy spells was installed at the center of the ceiling and it lit up the entire room.

The object below the light was not a bed. It was a square stage with short posts at each corner. It looked like a metal pedestal and three horizontal chains connected the posts to cover all four sides.

Also, a thick figure stood in the very center. He had a well-balanced body that almost looked carved from stone, he wore an M.H.R.R. uniform, and he was looking her way.

His facial features and build were solid, his hair was long and blond, his face was adorned with a mustache, and his sharp gaze was trained on her.

But the man had one difference from a normal M.H.R.R. boy: he wore a girl’s uniform.

Mitotsudaira reacted with a question instead of confusion or surprise.

“Heh. Well done making it this far, my new challenger!!”

The muscles below the girl’s uniform moved more than necessary as he crossed his arms and thrust out his chest.

“Ha ha ha. Maeda, you and Matsu always get along so well.”

“We do,” said Toshiie as the ship began to float and the deck vibrated. “There’s something I’ve been wondering, though. Chancellor Rudolf II is known as a Wahnsinniger, but why exactly?”

Matthias put his nail-grooming knife back in his pocket and smiled.

“But the thing about my brother is…he’s a real deviant.”

She was so busy wondering what exactly she was looking at that she was unable to react when the man named himself. However, crossdressing Rudolf released his tightly crossed arms and pointed at her with both hands.

“Ohhhh!? I may be actively imprisoned here, but with such a tall tower, all sorts of divine transmissions come pouring in! They’re all cut off at the moment, though!”

“I know you were beaten to a pulp.”

He nodded and narrowed his eyes.

She raised her right hand and cut him off.

This man was a Wahnsinniger, but he was still human. If he could say cruel things, her words would be able to reach him and there was no need to reply to his provocation. She was here on official business, so she lowered to one knee.

“I have come to visit you with a request from Musashi’s Chancellor and Student Council President and from Hexagone Française. To stop the Apocalypse which is quickly becoming an international problem and to pursue the truth of the related Princess Disappearances, I would like to borrow Chancellor Carlos I’s memo.”

“Are you willing to do that?”

She cut him off again and she could sense some real irritation inside herself, so she glanced up at him.

…He definitely is muscular, but…

Persona-kun had him beat in pure muscle volume and Urquiaga probably had a similar level of strength, so she saw no reason to fear him if it came to a fight.

…But what is this smell of blood and other bodily fluids?

Her only guess was Technomagie. If he really was obsessed with it, he would need animal blood and flesh for offerings.

However, this scent came from humans. She could only imagine humans had been torn to pieces here.

But was the man she saw here really someone who would do that?

She did not know, so she spoke while preparing herself to overpower him if it came to it.

“Let me ask again. Might we borrow Carlos I’s-…”

He teasingly held up a piece of parchment, rubbed it against the cheek of his square face, and looked to Mitotsudaira.

“You cannot have it. …I might think about it on certain conditions, though.”

She frowned at the word “conditions” and remembered the people collapsed in the stairways and corridors on the way up.

“Yes, that’s right. Your body. …You will need to use your body for me.”

She truly did take a half step back, but Rudolf kept his sharp gaze on her.

“Yes, that’s right. I need you to be my sparring partner.”

That unexpected term filled her heart with confusion, but her body managed to react.

She stood up as she thought about what he meant by “sparring partner”, but…

Rudolf II had vanished from the center stage.

Before she could even wonder where he had gone, something struck her from behind.