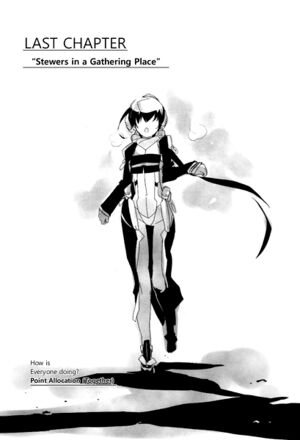 The fog had cleared and only the chilly night sky was visible up above.

She had heard that the clouds had cleared away and the moon was out. She ran through the chill of that air.

She had left the docking procedure to “Musashino” and she was on her way to the bridge in front of the academy.

Everyone was there and they were not moving.

They may have been so exhausted they had fallen asleep, but she was worried.

A lot had happened, but they would be back on their feet soon, wouldn’t they?

She trusted in that, but worrying about it was a different issue.

So she hurried. Suzu hurried. She took high steps so as not to trip as she ran as quickly as she could manage.

She made her way down the road and arrived at the steps.

She wanted to climb them quickly, so she used the railing.

She counted the steps so she would not take a step that was not there and she felt herself breathe as she climbed them.

The people of Kantou IZUMO had said they would make the Musashi better than new.

It doesn’t have to be long, so bear with it.

They would be given the power to fight.

They would be given the power to hurry.

They would be given the power to protect.

But the elder representing Oushuu had said that would be useless if the hearts of the ones to use it had died.

They had lost their will to fight.

They had lost their will to hurry.

They had lost their will to protect.

That was why the elder had said the following:

“Hopefully, you do not begin to think that nothing you can do will help.”

Suzu understood what that meant.

Their enemy had the dragon line reactors, a great ship, and a way of negating the power of Horizon’s Logismoi Óplo. On top of that, they had opposed various influential people and been hopelessly outmatched.

There had been nothing for them to do, so…

“If you wish to avoid fighting, you and the Musashi can always live here with us. Of course, I believe they would find you even here.”

Suzu was ashamed that she had thought Oushuu’s offer had sounded somewhat like a good idea.

That was why she had declared so certainly that they would be okay.

She felt like the sentence had come out whole for once. But…

She hurried. She pulled herself up by the railing and knew she would be reaching the top soon.

A piece had been torn off by the enemy’s attacks.

She had not noticed because it was always there and she had assumed it still would be.

Realizing it was gone after the fact was a hopeless mistake.

It was too late by the time she noticed. She had bent back while pulling herself up the railing and her hands groped through empty air.

She let out a voiceless scream.

Someone pulled on her hand, brought her feet back onto the steps, and then gave a strong tug on her hand.

He sounded proud of that fact, but his voice was a bit weaker than usual.

“Everyone’s waiting up top. We’re having a strategy meeting.”

Suzu arrived on the bridge with Toori pulling on her hand and Horizon supporting her.

There was nothing strange about the scene she found. They were all sitting or standing while either exchanging glances or a few words. But…

She felt like she was standing on the ground when it was heated by the sweltering summer sun.

They all wanted to say something or do something, but they were holding back.

They knew that now was not the time to act, so they held it all inside and let it stew.

They were not all like that. It was true a few of them remained cool.

…Some of them are angry, hiding their desire to act, and stewing away.

She trusted in that fact and made sure her heart would remember it.

She was certain that they would be okay. She was more certain than she had ever been before.

What if they regained the will to fight?

What if they regained the will to hurry?

What if they regained the will to protect?

What if they gained the power to fight?

What if they gained the power to hurry?

What if they gained the power to protect?

…What would happen then?

Everyone turned toward her.

Some voiced their surprise, but they would still be okay. They just had not realized it yet.

Suzu realized she needed to tell the people of Kantou IZUMO and of Oushuu that they were all going to be okay.

And then Toori faced her.

“Hey, Bell-san. Were we worrying you by any chance?”

She shook her head.

We’re going to be okay, she told herself as the others exchanged a glance.

“There’s no helping that.” Naruze stood up and sighed. “Sitting around isn’t going to help anything.”

But Suzu’s senses could tell that there was no heat in that sigh. The girl was simply looking toward the school building and the southern sky.

“Now, we need to finish up the Battle of Mikatagahara.”

The nudist pulled his hips back as Horizon silently prepared a bowl and chopsticks.

Naruze ignored the two of them, opened a Magie Figur, and readied her pen.

“The poop doesn’t matter, but there is one thing I have to do: the grimace painting.”

She looked to Horizon and Toori, so the others did as well.

“When Lord Matsudaira lost the Battle of Mikatagahara, he had a painting made of his look of anger upon realizing the magnitude of what he had lost. That way he had a reminder of his mistake.”

“You’re going to draw that?”

“Judge.” The Technohexen nodded. “I’ll draw all of you.”

“I’ll draw the looks of people who have realized they we only survived thanks to a group who lived through a lot.”

“Judge.” Mitotsudaira nodded and slowly approached the bridge’s railing. “That’s right. We’re probably not even aware of it all, but we have inherited so very much and that has allowed us to live on.”

Mitotsudaira then turned toward the bow.

The floating dock named Ariake was opening up to envelop and protect the entirety of the Musashi.

She opened her mouth as she watched it move.

She started to say something, but first she ground her teeth and looked up into the sky.

When she spoke toward the moon, her words formed a growl but not a howl.

“We need to make sure we repay them for that one day.”

Naruze breathed in, nodded, raised her pen, and spoke to the others.

“We’ll be the next ones to set history in motion.” 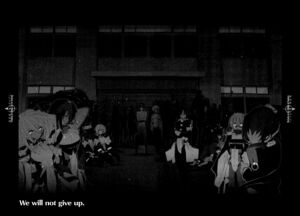 We will not give up.