Chapter 31: The Pair on Twin Walls[edit] 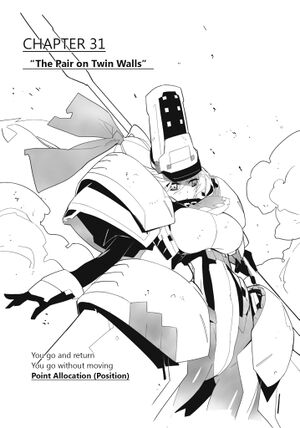 You go and return

You go without moving

Below the Mito sky, Futayo’s battle with Fukushima Masanori reached its conclusion.

There was a single reason for this: the Tonbo Spare had not activated.

It had not before either. The spare supposedly had the same thoughts as Tonbokiri, yet it would not lend her its power. She did not know why because it was maintaining its silence.

“Not knowing” succinctly summed up the situation that Futayo faced.

She felt no hint of activation, only the chill and weight of a hunk of metal in her hands.

She did not understand why the Tonbo Spare would not obey her.

And that lack of understanding led her to a single conclusion: she was not good enough.

Meanwhile, her enemy’s attack did work. The tip of Fuksuhima’s spear split in half and the flat-looking surface opened before Futayo’s eyes.

She was directing herself in an impossible direction, which would provide a certain result.

…I’ll be blown away by the recoil!!

That was exactly what happened. Instead of moving in the direction of her acceleration, she was deflected like a ricocheting bullet and kicked into the air by her own acceleration spell.

She smashed through the roof of a private home several dozen meters away and collided with a wooden container storehouse.

Masazumi watched as Futayo was launched through the air.

The girl flew behind a nearby home’s roof, but before Masazumi could turn that way…

She suspected it was a wooden box structure based on the crashing sound, and then the wooden pieces were blasted into the air like a crashing wave.

But among the sounds of broken and creaking wood, someone approached in the span of a breath: Fukushima Masanori.

She used her acceleration spell to fall toward Masazumi using the roofs on either side of the alleyway.

Her face was downcast, but Masazumi could tell her teeth were tightly clenched. Almost as if…

…That wasn’t what she wanted?

Masazumi could only think Futayo had self-destructed, but Fukushima must have had her own thoughts on that matter.

Fukushima quickly approached. She placed the tip of her spear along her straight line of acceleration and arrived within fifty meters in the span of a breath.

As soon as Masazumi realized how fast she was, light appeared in the exposed interior of the spear named Ichinotani.

Masazumi sensed danger, but Asama was the one to react.

“It’s weak, but that light is a real dragon cannon! It isn’t an artificial one produced by a weapon!”

She raised her eyebrows as she hurriedly prepared a defensive spell with a charm.

“Why is a human weapon firing a dragon’s attack!?”

No one could answer that as the glowing attack was fired their way from Fukushima’s spear.

Masazumi thought it was going to be a direct hit, but a different blast of light appeared far down the road.

Kiyomasa had fired her glowing blade toward Mitotsudaira on top of the bisected transport ship sliding down the road.

Ten Spears #2 Katou Kiyomasa fired while performing a side flip. The blade of light tore into the starboard side deck and accurately swept through the position of the silver hair.

Kiyomasa’s blonde hair fluttered in the air as she landed from her side flip. She turned to stern to check on Caledfwlch’s results.

She saw a shadow from overhead and sensed a presence falling without resistance, so…

She leaped left, toward the outside of the ship.

Something fell in the position she had just vacated: Caledfwlch’s right spear. She had let go of that one to use it as footing for her side flip.

Why is that there? she wondered as the spear stabbed into the deck and shook.

If it had been a mere stone or piece of rubble, she would have ignored it, but the weapon she herself had let go of had fallen and stabbed into her previous position. It naturally caught her attention.

And that created a brief moment of inattention.

Something used that moment to charge in from the stern.

It was a silver wind.

The silver wolf used the ship’s long deck for a long starting run of repeated bursts of movement.

…She escaped that previous blast unharmed!?

Kiyomasa understood what had happened.

The silver wolf had chosen a certain hiding spot: the split down the center of the sliding ship.

She had used a burst of her full strength to drop down but had not immediately jumped back up. She would have been hit by Kiyomasa’s attack if she had.

That had to have been the silver wolf’s decision. She had remained below and circled to the back of the quickly sliding ship.

“And then used the length of the deck to reach her top speed!”

It was a ridiculous decision. If she had simply remained on the ground, Kiyomasa would have been taken away with the ship.

But that was not what a wolf did. A wolf protected her territory until the enemy had been completely driven out.

So she was approaching. The color silver raced in a straight line with no feints.

She was fast. The sound of her footsteps arrived only after she did. An afterimage formed one step behind her.

She roared and deepened her landing and attack stance, but Kiyomasa also took action.

The right Caledfwlch had yet to release its power, so she forcibly pulled it from the deck and aimed it toward the silver wolf.

The blast was fired horizontally from the tip of the blade.

The Mito residents who had stepped outside to watch the battle’s progress saw what happened next.

Caledfwlch’s light was fired from the sliding transport ship, so their lord did something with Excalibur.

They had not been able to see it. Their eyes had only been able to capture their lord making the throwing motion.

What happened afterwards was too fast to see, but as she continued running…

Something flew into the beam of light and split it into two blasts of spray.

It was Ex. Collbrande. That sword of English royalty cut apart the destructive light with sounds of scraping and splitting.

It continued toward the enemy who wielded the light cannon spear. Excalibur flew toward the weapon itself.

Kiyomasa made a split second decision.

She had no reason to take the blow from Excalibur since she was in the middle of firing. So…

As if to restrain Caledfwlch, she lowered her hips. If she placed her knee down in a kneeling position, Excalibur would pass over her head.

…And my attack will hit her from below!

She was aiming for a winding hit to the knees.

A weapon was not the only frightening attack at a werewolf’s disposal. A jab with their claws or a punch was harder to see coming, so this girl would be more dangerous up close. That was why Kiyomasa targeted her legs.

The enemy made a leap.

It was a low but quick leap meant to slip above the cannon blast.

With the beam of light below, making a kick would be no easy task. And with Kiyomasa on her knee, a claw attack from above would also be difficult.

All Kiyomasa needed to do was make a counterattack with her left spear. To do that, she held the left Caledfwlch forward in order to slam the tip against the leaping silver wolf. But…

Her immediate decision protected her. She kept one heel raised and laid her upper body down forward. Her blonde hair swung forward, and…

Ex. Collbrande flew overhead from behind.

She did not even bother asking why. The answer was a silver chain. A chain had been laid out in a wide enough circle that she had not sensed its presence. Then, it had caught Ex. Collbrande and thrown it back to its master.

Up ahead, the silver wolf bent backwards with Ex. Collbrande already in her hands.

Her body sprang back from its backwards lean for an overhead attack in midair.

There was no hesitation in the attack. Block it and be broken. Touch it and be sliced. It was that sort of blow.

Kiyomasa lowered her body as much as possible. Her upper body was lowered, so she could not evade to the left, to the right, or backwards. And she could not make a counterattack with her weapon held so low.

So she decided to push with her raised heel.

She moved her lowered body forward.

She did not even look to the royal sword as it audibly cut through the air because she was busy with something else. She took advantage of the very slight opportunity before her.

She dropped her right foot as if to pin Kiyomasa to the deck.

Kiyomasa slammed loudly against the deck.

As if being rewarded, the silver-haired wolf leaped straight up toward the heavens.

However, Kiyomasa endured the attack that knocked her face-down into the deck. She raised the arms holding the two halves of Caledfwlch and she tried to swing them up toward the silver wolf.

Before she had even finished shouting, Kiyomasa was launched into the air. She had not been hit by any kind of attack.

It was the deck.

The wreckage of the transport ship had reached the end of the gouge in the road and had been forcefully knocked upwards.

The hopping bow and the ship itself launched Kiyomasa because she had been pushed back toward the bow.

With a spectacular noise, the transport ship stood vertically in the center of the town. The trembling, fifty-meter ship hopped up in its bisected state.

It whipped up the wind, scattered wreckage and rubble, rose like a koi climbing a waterfall, and for just a moment floated in midair while split between north and south.

As the ship hung in the air, two figures alighted on its nose.

One was Kiyomasa who released light from the bottom of her right spear to forcibly land on the southern wreckage’s bow.

The other was Mitotsudaira who spread her arms in midair, rapidly spun her body, and landed on the northern wreckage’s bow.

The two of them waited until just before the stern of the floating ship crashed into the ground.

She used all of her strength, gave her entire body a burst of speed, and increased the inertial force by pulling back on the chain. An explosion of water vapor surrounded Excalibur as it flew horizontally through the air.

A moment later, her attack collided with Kiyomasa.

Without even listening to the intense sound, Mitotsudaira turned he head west in search of someone.

Mitotsudaira saw her king. Fukushima Masanori had launched an attack in that direction.

What was she supposed to do now that Futayo could no longer fight?

She looked his way from the ship that was about to land, but…

Fragments of light scattered through the sky. Someone had deflected Fukushima’s dragon cannon. It was…

The nudist had blocked Fukushima’s attack.