Chapter 65: Decisive One at the Peak[edit] 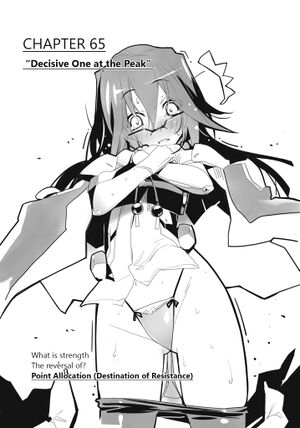 Ookubo did not know what had happened.

She could tell her hips felt lighter. That was because her side skirts had been forced off of the hard points there.

What had contained the body heat around her hips and legs was gone and those parts of her body felt defenseless.

She suppressed a scream. That was not what the Representative Council Head or a name inheritor would do. Yes, her skirt had been removed and that was all.

But, she thought. Why did this humiliation happen?

When she heard that, Ookubo looked down.

At the lower stomach of her inner suit, the panties portion had been removed from the left and right attachments and then fallen down between her legs. It was still attached on the butt side, so it swung down like a pendulum.

The tights had been pulled down a little, but in case there was an attack, she had worn panties below as a supporter. The Vice President looked back at her and breathed a relieved laugh.

Ookubo brought her knees together, stuck her hands between her legs, and crouched down.

Asama: “Umm, I mostly get why you did that, but Ookubo-san probably has normal sanity levels and low insanity resistance levels, so it might be better not to push her too far.”

Wise Sister: “Heh heh heh. Your mistake was thinking you could do it without practicing first! Come on over to our place sometime. You can use Asama and Mitotsudaira for practice! We can even get my foolish brother to crossdress!”

Mal-Ga: “Oh? You’ve piqued my interest with this talk of practice. …I think you could learn a lot, Masazumi, so just do what you see in my drawings.”

Vice President: “Why do I have such a hard time agreeing with anything you people say!?”

Her hands were trembling so much she had trouble attaching the panties portion on both sides.

Her prosthetic arm was too well made. They had attempted regenerative treatment for the arm, but that had failed and they had remade it into a prosthetic in the process. The problem was how it was shaken by her emotions like this.

But the Vice President stood in front of her to hide this.

If you’re just going to apologize, how about not doing it in the first place? But…

Ookubo did not ask what she wanted. That was because the surprise had brought tears to her eyes and her trembling throat threatened to send those tears spilling out.

Honestly, when did this start? When did I get so tearful? But…

…“That must have been painful.”

She felt she had grown too soft. After all, she had been moved to emotion just because someone had agreed with her weakness.

But the Vice President said more while still holding out her hand.

“Don’t worry about it. This is normal for Musashi’s Student Council. There’s nothing to worry about.”

Wait, she thought. What was that? she also thought. She wanted to say something, but she could not get the words out and the Vice President spoke calmly instead.

“I’m not going to reject what you’ve said. As the top of Musashi’s political side, I will take into consideration what a fellow politician like you says, work it into my plans if necessary, and do something else if not necessary. …As a politician, you must know that choosing or rejecting your own opinion is part of the job. So…”

She had her anteater open a sign frame. It displayed the suggestions Ookubo had made, but the Vice President added her own words.

Objective: Without fighting, return the Far East to its pre-Battle of Mikawa state and reacquire peace.

“I want to stick to anti-war policies as much as possible. And after recovering the Far East’s position in the world, I want to return the Far East to the course of history continuing from Mikawa and have peace.”

1: Negotiate an alliance with Hashiba and P.A. Oda and then advance the history recreation according to the Testament Union’s instructions.

“If we are to hasten Hashiba and Oda’s history recreations, negotiations will be necessary. Rather than bind ourselves with an alliance, I wish to prioritize negotiations that seek the proper forms of our nations, even if that means battle.”

2: Store the Musashi in the Ariake and use its presence to deter an attack on the Far East.

“Once the Musashi has done what it needs to do, it would indeed make an excellent deterrent in the Ariake or wherever else it might be.”

3: Reject all combat and achieve our goals such as retrieving the Logismoi Oplo through peaceful discussions at the Peace of Westphalia.

“Opposing war will be our standard position. And I agree Westphalia is where this dispute will be settled.”

The Vice President added a “listen” before continuing.

“Ookubo, the plan you want is mostly consistent with ours. We can include your thoughts in our plan. That is why we will support you however many times it takes. And all you need to do is help us in the places where your plan fits with ours.”

She smiled as she said one more thing.

“We would appreciate it if a name inheritor like you sided with the Student Council. …Can you do that?”

Ookubo sighed in her heart.

…I can’t believe this.

…And this girl has done more than that…

Yes, that was right. It was not that Ookubo had forgotten or that she had not noticed.

This girl had once literally carved away a part of her body.

It had been in order to inherit a name, but Mikawa’s national policies had not allowed it to happen. It had not been her fault, but the future she had planned for herself had been snatched from her by a power she was helpless to fight.

After having so much taken from her, this girl had not given up and she had kept going. She had to have nearly given in or given up along the way. She was only human, so she had to have been angry.

But the Vice President made a sudden movement. She had the anteater on her shoulder close the sign frame and then she spoke so only Ookubo could hear.

“The problem is…I did think about only taking it partway.”

“Judge. Until Mikawa, that is. But…there was a troublesome idiot there.”

As for what kind of idiot it was…

“That idiot’s own mistake led to him losing something important to him and he could never forget what had happened, but he somehow managed to keep moving forward. He had to have nearly given in or given up countless times…no, I think he had to have people laughed at him, mock him, scold him, and try to ‘kill’ him more times than I can know.”

“That idiot is everyone’s ally. He’ll head out to save someone, even if he has to do it alone.”

“You went alone to the scene of the shell hit, didn’t you? I know all about that.”

She reached out her hand. Ookubo was crouching, so she could not escape.

She took Ookubo’s left hand and then her right hand.

She held Ookubo’s hands, wrapped her own hands around them, and pulled.

Ookubo was pulled to her feet. Her vision rose and she could see the Musashi stretching into the distance down below.

All of the people were raising their arms and voices.

Cheers and cries of joy blended together into an incomprehensible roar.

These people also had something they wanted to do and they wanted someone to acknowledge that.

There was something the people of Musashi needed to do.

The Vice President’s voice was not too quiet and not too loud, but it carried into the distance.

Ookubo realized something as that girl held her hands: That smiling voice and face were a sign that this girl was serious.

She had seen it before, but she felt as if she had not seen it lately.

So had she drawn it out of the girl?

…That must have been painful.

Workers from the engine division were among the crowd down below. If they had been injured back then, Ookubo would be hurting now.

But the Vice President was different. In the Battle of Mikatagahara, they had lost some important leaders who might have become future allies. That had to have hurt. But…

The Vice President said nothing. She simply faced everyone with her first powerful smile since then. That may have been why Ookubo felt something fall from the corners of her eyes to her cheeks.

She did not stop it.

Even if she had an inherited name or led the Representative Committee, destiny would not protect her.

Destiny would not protect anyone.

So at the very least, Musashi had taken that fact into consideration as they accepted what they were doing here.

Ookubo looked to the unseen sky beyond the Ariake’s closed ceiling.

And she quietly but audibly cried.

It was in the air.

A few figures appeared without warning in the sky above Musashi Ariadust Academy’s bridge.

They dropped down to the site of the confrontation.

They were automatons cobbled together from various components and materials.

There were three in all, they held blades in their hands, and…

They all charged toward Ookubo and Masazumi.