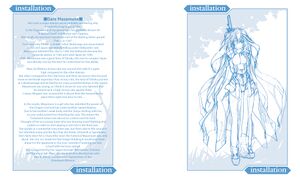 He’s such a major daimyo you’re probably wondering why it took this long to get to him.

In the Taiga drama of my generation, he’s probably known for “It doesn’t hurt!” and Ikariya-san’s Sagetsu.

Historically, he was born toward the end of the Warring States period. That is, in 1567.

So he was only fifteen or sixteen when Nobunaga was assassinated (1582) and Japan was already falling under Hideyoshi’s rule.

Masamune inherited the clan in 1584, but Hideyoshi became the imperial advisor in 1585 and ruled Japan by 1590.

While Masamune was a great hero of Tohoku, the race to conquer Japan was already over by the time he could show his true ability.

Now, his lifetime victory rate was around 60% which is quite high compared to the other daimyo.

But when compared to the Oda forces and their successors who focused more on territorial expansion than victory rate, the land of Tohoku put him at a disadvantage and he had far too many powerful daimyo in the region.

Masamune was young, so I think it shows he was very talented that he earned such a high victory rate against them.

I mean, Mogami was so powerful it almost feels like harassment to place them right next door to him…

In the novels, Masamune is a girl who has inherited the power of the Dragon God and has a twin brother named Kojirou.

Due to her brother’s weak body and the Seiryu sticking with her, no one could protest her inheriting the clan. This meant the Testament Union had almost no control over her land.

I thought of her as a young hope who was learning sword fighting and politics in order to start playing a real role in the third year.

She speaks in a somewhat masculine way, but that’s due to the source of her inherited name and the fact that she thinks of herself as “genderless”.

She’s fairly short for a Chancellor (even the historical Masamune was only about 160 cm), so I made her hair longer thinking it would give more impact to her appearance, but now I wonder if washing her hair is hard with the horn and all.

She is supported by her upperclassmen like Narumi, Oniniwa, and Katakura, but she is also the kind of underclassman who works to live up to everyone’s expectations of her. 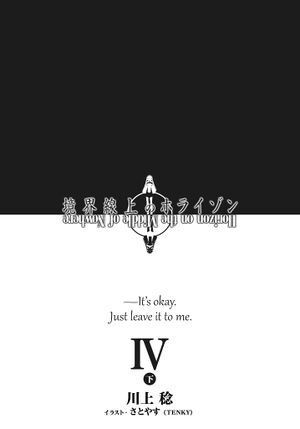 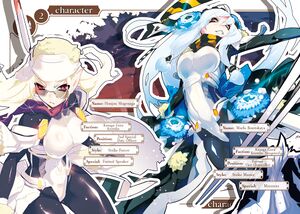 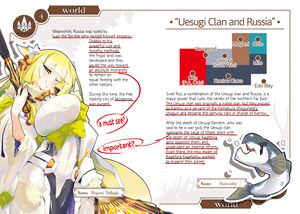 Sviet Rus, a combination of the Uesugi clan and Russia, is a major power that rules the center of the northern Far East. The Uesugi clan was originally a noble clan, but they moved to Kantou as a servant of the Kamakura Shogunate’s shogun and became the samurai clan in charge of Kantou.

After the death of Uesugi Kenshin, who was said to be a war god, the Uesugi clan overcame the siege of Otate, dealt with the death of Uesugi Kagetora who opposed them, and underwent an internal reform. From there, the new leader of Kagetora Kagekatsu worked to expand their power. ←Important

Meanwhile, Russia was ruled by Ivan the Terrible who named himself emperor. Thanks to his powerful rule and forceful methods the frigid land was developed and they paved the way toward an absolute monarchy ←A Must See to remain on equal footing with the other nations.

During this time, the free trading city of Novgorod was purged. 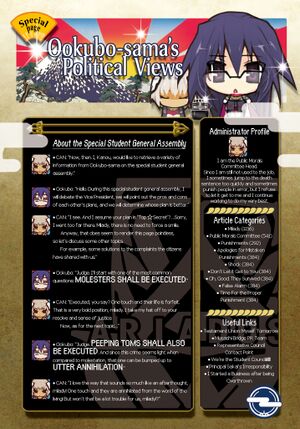 About the Special Student General Assembly

CAN: “Now, then. I, Kanou, would like to retrieve a variety of information from Ookubo-sama on the special student general assembly.”

Ookubo: “Hello. During this special student general assembly, I will debate the Vice President, we will point out the pros and cons of each other’s plans, and we will determine whose plan is better.”

CAN: “I see. And I assume your plan is ‘Top☆Secret’? …Sorry, I went too far there. Milady, there is no need to force a smile. Anyway, that does seem to render this page pointless, so let’s discuss some other topics. For example, some solutions to the complaints the citizens have shared with us.”

Ookubo: “Judge. I’ll start with one of the most common questions: MOLESTERS SHALL BE EXECUTED.”

CAN: “Executed, you say? One touch and their life is forfeit. That is a very bold position, milady. I take my hat off to your resolve and sense of justice. Now, as for the next topic…”

Ookubo: “Judge. PEEPING TOMS SHALL ALSO BE EXECUTED. And since this crime seems light when compared to molestation, that one can be bumped up to UTTER ANNIHILATION.”

CAN: “I love the way that sounds so much like an afterthought, milady! One touch and they are annihilated from the world of the living! But won’t that be a lot trouble for us, milady!?”

I am the Public Morals Committee Head.

Since I am still not used to the job, I sometimes jump to the death sentence too quickly and sometimes punish people in error, but I refuse to let it get to me and I continue working to do my very best.