Chapter 18: Heat Source Student in the Line of Sight[edit] 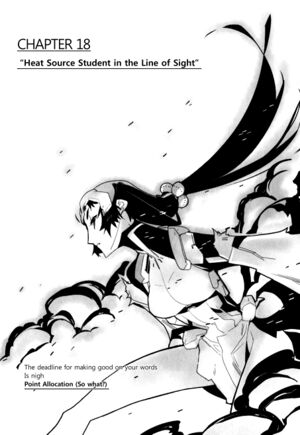 The deadline for making good on your words

Point Allocation (So what?)

“When your next attack hits, it will defeat me?”

…I see. So she claims to have seen through me.

To keep one’s actions within that range, an accurate pattern was necessary.

It was true that it was safer to assume the enemy would use efficient movements instead of random ones. The enemy’s best attack method was also the easiest to plan a defense for.

However, she was a ninja.

She was also an automaton, but that was why she devoted herself to being a ninja.

She had expected that an opponent of Date Narumi’s level would be able to read any pattern in her movements.

Thus, she had managed her actions and accumulated experience on this battlefield to ensure her movements did not fall into the same pattern. And yet…

“Am I following a pattern?”

Date Narumi held a single mandible sword forward with her hips slightly lowered, but she did not nod. She simply pulled her right leg back.

“When my next attack hits, it will defeat you.”

It was the same statement as before.

Immediately, Date Narumi charged toward her.

…That is quite a deep lean.

She almost seemed intent on bringing her chin to the floor. She kept her hips arched high and she was only able to run like that thanks to the strength of her prosthetic legs.

Her hair fluttered behind her and she raised her sword high.

The raised sword was going to strike Mochizuki’s left leg as she sent it forward.

The attack would sever one leg, but Mochizuki was puzzled.

This was Date Narumi’s first time severing a leg like this. So…

“You would not have seen a supposed pattern for this.”

As she wondered why, she pulled her left leg back.

She fell back while also throwing her explosive.

At the same time, Date Narumi accelerated and stood back up. The thrown explosive coal passed by her head.

Then it exploded. The blast pursued Date Narumi and blew her hair around, but she swept it back behind her by pursuing Mochizuki.

Date Narumi’s sword was in her right hand. She once more targeted Mochizuki’s left leg. Specifically, the left knee. Mochizuki had yet to fully pull it back, so Date Narumi targeted the raised left knee.

And so Mochizuki quickly pulled her left leg back.

Her high processing speed allowed her to see her opponent’s movements. Her thought speed told her when she had to move to remain safe.

So she did so.

And she threw an explosive. Date Narumi ducked to avoid it.

Her arm rotated in an impossible way. No, it was a prosthetic. The mechanical right arm was targeting Mochizuki’s torso even as Date Narumi kept her body low.

But Mochizuki could see it all. She calculated when to dodge, so…

With that thought, Mochizuki fell back and dodged.

Then Date Narumi attacked again. It was faster than before, but it came immediately after the other. So…

The girl with prosthetic limbs pursued.

The automaton girl was pursued.

A mandible sword attack was dodged.

Many such moments were repeated, overlapped, and did not fit together.

No matter how much the pursuer bit at her, the pursued pulled back just barely enough.

No matter how much the pursued attacked, the pursuer just barely avoided it.

But someone spoke among those watching it unfold.

Voices of “yeah” and “judge” followed. But then Urquiaga spoke as he worked as a defender next to Asama who was quickly managing the various spells needed on the battlefield.

“Narumi. If you find your dance partner’s movements are hard to follow, you can just honestly ask to take their hand. And yet…”

He repeated “and yet” with a sigh.

“Why do you always memorize your partner’s movements?”

Mochizuki asked that question as she dodged and fell back for nearly the hundredth time.

What was there to memorize here? But…

“Don’t be silly. …I’m not about to reveal to the enemy what I can do.”

With that, Date Narumi moved forward.

She swung her sword toward Mochizuki, but the automaton saw through the attack. So…

She read the timing and evaded.

As a result, Date Narumi’s attack did not hit.

I am the one memorizing your movements, she thought.

But at that very moment, Date Narumi spoke.

“I have memorized your optimal evasion pattern.”

Memorizing and reading your opponent’s patterns was usually what the defender did. They read the attacker’s movements to keep themselves safe. That was how it worked. But…

…She read my evasion pattern…?

Mochizuki did not understand.

Such a waste of time.

“Now,” said Mochizuki’s opponent. “It’s time to hit you like I said I would.”

With that, she moved forward.

However, she was not leaning forward like before. She simply walked forward with light steps.

Date Narumi threw away her weapon.

She discarded it like she was merely leaving it there. And the mandible-shaped sword clattered to the Ariake’s roof.

Then Date Narumi continued forward. She moved to pass by Mochizuki on the right.

Mochizuki was unsure what to do.

Date Narumi was the former Vice Chancellor of Date Academy and a current enemy. And she was walking forward while unarmed.

She had no combat power. Because she had discarded her weapon. Even if this was some sort of trick, Mochizuki’s processing speed could immediately detect Date Narumi’s weapon being spatially ejected.

So there was no threat in Date Narumi’s action.

Mochizuki determined this to be “safe” and then she realized something.

Her opponent really had seen through her.

…She saw through my optimal decision as an automaton!

She could do nothing.

But she had made all these decisions in an instant.

An automaton’s processing speed could reach as high as a million times that of a human. So Date Narumi had only taken a single step toward her. The girl’s movements were horribly slow in that high-speed vision and the automaton had plenty of time to react.

What could she do to make this person into an enemy?

No, setting up a conclusion in advance and trying to fit the calculations to that made for a fun puzzle, but it meant straying from reality.

She only had to view reality and guide things to the result there.

“I am fighting Date Narumi and the odds are good her actions are some form of strategy.”

…So the odds are good Date Narumi is an enemy.

“Date Narumi was attempting to defeat me until just now.”

…So the odds are good Date Narumi is an enemy.

“In our current mission, Musashi is an enemy.”

“Musashi took Isa from us, so they are an enemy of the Unneeded.”

“Kakei and Unno are supporting my attacks.

…So Date Narumi is an enemy.

“Musashi will eventually be our enemy during the Siege of Osaka.”

As Mochizuki thought, she saw Date Narumi prepare to take a 2nd step.

She was also defenseless. That meant she was not a threat and thus Mochizuki took no defensive action.

But, began Mochizuki in her heart. The past events suggest that Musashi is very likely our enemy.

However, there was a problem. Was she perhaps giving an arbitrary advantage to the idea that Musashi was an enemy?

So she thought some more.

“Under what conditions would Musashi be our ally?”

…I have determined the bare minimum requirement would be for the Siege of Osaka to have passed.

Then, thought Mochizuki. As the Siege of Osaka has yet to occur, Musashi must be our enemy.

She fell back and threw a piece of explosive coal at the unarmed girl walking toward her.

Narumi pursued her opponent who fell back.

The coal approached and expanded.

Narumi spoke with a smile just as the explosion erupted.

…It can be a problem how many of us love flashy attacks.

As Kakei watched Mochizuki’s movements out of the corner of his eye, he saw something unbelievable straight ahead.

He had just fired 10 bullets toward Musashi’s Vice Chancellor at point-blank range. And she had been knocked away.

“Did she forcibly defend against them in midair!?”

But she had not been hit. No, she technically had been hit, but…

…She blocked them with her spear!?

Futayo had chosen to use her spear first.

As the bullets arrived from so close to her body, she raised her spear and struck as if pushing back against them.

And that push allowed the bullets to hit the spear before her body.

She opened Soaring Wings on her feet and knees. Then she kicked off the repelled spear before the bullets could reach her.

Kimi whistled, but Asama had lost sight of Futayo.

Just as Asama thought Futayo had been hit, Kimi’s hand moved in from the side.

Kimi grabbed Asama’s chin and pointed her head left. Futayo was there.

She had made a leap while bending backwards in the air. But…

There was 1, 2, and then 3 such sounds. Each time, Futayo jumped left through the air while continuing to bend backwards. Asama realized what was causing that odd position.

She used the struck spear as footing and leaped in the direction of the bullet’s flight. And since she was using Soaring Wings…

“She hasn’t built up Soaring Wings enough and she isn’t jumping right. …This will eventually become something else entirely. But, well, even when that happens,” said Kimi, “I doubt Futayo can correct that unsteady trajectory. Not with her sense of balance.”

But the sound rang out again. Futayo matched the axis from her feet to the pursuing bullets and she ascended horizontally through the air.

She continued bending backwards as the noises counted up to 7.

“The last one won’t hit her when she’s bent that far back.”

Futayo’s hair flew in an arc.

She dodged that final bullet and landed on the Ariake’s top surface. And…

Something flew into Futayo’s raised hand.

It was the Tonbo Spare she had used for footing.

She grabbed it and stood up.

The previous Soaring Wings remained on her legs.

They had not shattered. And Asama saw Futayo instantly jump toward Kakei on her right.

Kakei did not look back.

He did not need to to know the enemy was approaching.

“Bring it on, impatient girl!!”

He fired. But not from him to his enemy.

He fired from the right of his enemy while she ran. And at point-blank range.

He immediately heard a noise.

It was the solid metallic one of a ricochet. And it came from directly behind him.

He did not look back.

There was no reason to. After all, the sound was more than enough to know what had happened.

“Did you block them with your spear!?”

The wind blew in on the left.

It was Musashi’s Vice Chancellor.

She had leaped to the left and caught them on her spear while airborne.

The wind she created was not targeting him. So…

He let the sweat drip down from between his hat and skin and he placed a new length of fuse in his mouth.

“You know how my attack works, don’t you? But let’s see this through to the end.”

With that, he came to a stop. And…

“Time for a shootout.”