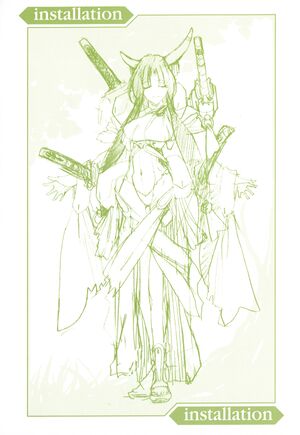 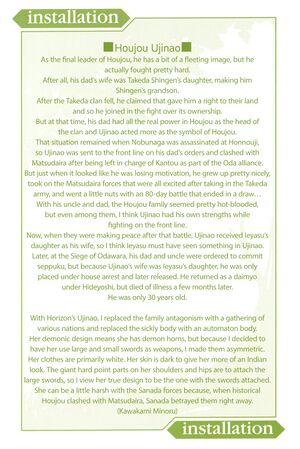 As the final leader of Houjou, he has a bit of a fleeting image, but he actually fought pretty hard.

After all, his dad’s wife was Takeda Shingen’s daughter, making him Shingen’s grandson.

After the Takeda clan fell, he claimed that gave him a right to their land and so he joined in the fight over its ownership.

But at that time, his dad had all the real power in Houjou as the head of the clan and Ujinao acted more as the symbol of Houjou.

That situation remained when Nobunaga was assassinated at Honnouji, so Ujinao was sent to the front line on his dad’s orders and clashed with Matsudaira after being left in charge of Kantou as part of the Oda alliance. But just when it looked like he was losing motivation, he grew up pretty nicely, took on the Matsudaira forces that were all excited after taking in the Takeda army, and went a little nuts with an 80-day battle that ended in a draw…

With his uncle and dad, the Houjou family seemed pretty hot-blooded, but even among them, I think Ujinao had his own strengths while fighting on the front line.

Now, when they were making peace after that battle, Ujinao received Ieyasu’s daughter as his wife, so I think Ieyasu must have seen something in Ujinao.

Later, at the Siege of Odawara, his dad and uncle were ordered to commit seppuku, but because Ujinao’s wife was Ieyasu’s daughter, he was only placed under house arrest and later released. He returned as a daimyo under Hideyoshi, but died of illness a few months later.

With Horizon’s Ujinao, I replaced the family antagonism with a gathering of various nations and replaced the sickly body with an automaton body.

Her demonic design means she has demon horns, but because I decided to have her use large and small swords as weapons, I made them asymmetric.

Her clothes are primarily white. Her skin is dark to give her more of an Indian look. The giant hard point parts on her shoulders and hips are to attach the large swords, so I view her true design to be the one with the swords attached.

She can be a little harsh with the Sanada forces because, when historical Houjou clashed with Matsudaira, Sanada betrayed them right away. 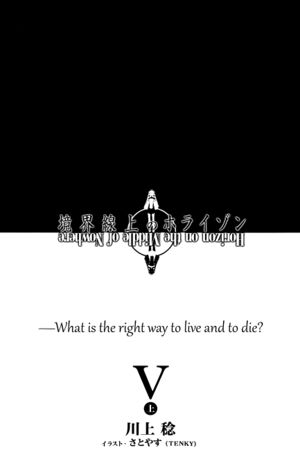 —What is the right way to live and to die? 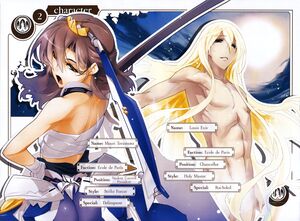 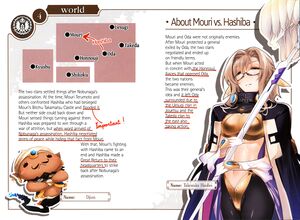 About Mouri vs. Hashiba

Mouri and Oda were not originally enemies. After Mouri protected a general exiled by Oda, the two clans negotiated and ended up on friendly terms.

But when Mouri acted in concert with the Honnouji forces that opposed Oda, the two nations became enemies.

This was their general’s idea and it left Oda surrounded due to the Uesugi clan in Jouetsu and the Takeda clan to the east also taking action.

Arrow from Oda to Mouri: Hashiba

The two clans settled things after Nobunaga’s assassination. At the time, Mouri Terumoto and others confronted Hashiba who had besieged Mouri’s Bitchu Takamatsu Castle and flooded it.←Important!

But neither side could back down and Mouri sensed things turning against them. Hashiba was prepared to win through a war of attrition, but when word arrived of Nobunaga’s assassination, Hashiba negotiated terms of peace while hiding that fact from Mouri.

With that, Mouri’s fighting with Hashiba came to an end and Hashiba made a Great Return to their headquarters to strike back after Nobunaga’s assassination. 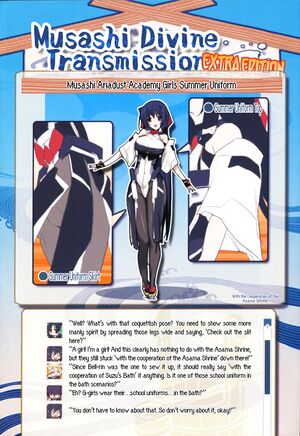 Bottom corner: With the cooperation of the Asama Shrine.

Naruze: “Well? What’s with that coquettish pose? You need to show some more manly spirit by spreading those legs wide and saying, ‘Check out the slit here’!”

Naito: “Since Bell-rin was the one to sew it up, it should really say ‘with the cooperation of Suzu’s Bath’ if anything. Is it one of those school uniform in the bath scenarios?”

Asama: “You don’t have to know about that. So don’t worry about it, okay?”