Chapter 46: Boy and Girl in a Room of Goodbyes[edit] 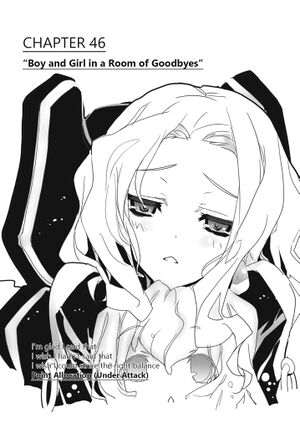 I’m glad I said that

I wish I hadn’t said that

I wish I could strike the right balance

“So are you all ready? …Oh, look. You already forgot your bamboo bottle.”

A girl’s voice reverberated through a small room.

With the sound of a wheelchair moving, Miriam handed over a bamboo bottle. The translucent girl sitting on her lap then spoke.

“Papa, where are you going?”

“Well, you see? Papa is going to the surface with some other girls.”

She asked it so seriously that Azuma had to think for a moment.

“What should I say, Miriam?”

“I wasn’t expecting such a serious reaction either. …But papa really is going on a vacation with several other girls.”

“I’m glad you didn’t refuse to go out of some weird consideration for me.” Miriam glanced here and there around the room. “Are you forgetting anything?”

“You have to bring your own blanket, right?”

“You aren’t used to spending the night outside, are you? Oh, if you need a string to tie it up, use the band on my bed. It’s only meant to keep my blanket from falling off, but it should be enough.”

Miriam smiled bitterly as he quickly climbed the ladder and gathered up his blanket.

“You can attach it to the latch on the bottom of your backpack, can’t you?”

“You bought a pretty expensive KENDO brand for Shugendo practitioners, so I assumed you knew all about this.”

“I only bought it because the person at the shop recommended it.”

“I see.” Miriam nodded in understand. “You’re such a good customer.”

“Yeah, that’s what they said.”

“…Do you know what that means? No, I suppose not.”

Miriam glared at him, so Azuma thought about it before finally tilting his head and asking a question of his own.

“I’m really not sure what you mean, but are you going to lecture me?”

She just about nodded at that, but she stopped.

“You know,” she began. “You just made one hell of a misunderstanding there. It’s not like I want to lecture you. …Besides, a woman would prefer a man who doesn’t need to be lectured.”

“Then I’ll work hard to become one.”

“…Do you know what that means? No, I suppose not.”

Miriam glared at him, so Azuma thought about it before finally tilting his head and asking a question of his own.

“I’m really not sure what you mean, but are you going to lecture me?”

Getting caught in a loop was not going to help.

Miriam inspected him now that he wore the backpack with the blanket attached. She grabbed the list of what to bring and compared it to Azuma.

“Okay, I have a feeling you’re going to greatly regret putting the towel in with everything else, but you should be fine.”

“I don’t like the sound of that first part.”

“Don’t worry about it. …I can’t go with you, but I’ll be looking after our home, so have fun. Make sure you have some good stories for me when you get back.”

“…The others are seriously planning to fight some Celestial Dragons.”

“That fight last night was incredible too.” Miriam’s expression relaxed. “Hey, Azuma, you’ve been thinking about something after seeing that battle, haven’t you?”

He fell silent, so…

Miriam could more or less guess what Azuma was thinking.

Lately, he had taken walks with her and looked after the translucent girl. But while he did so, she had sensed that he wanted to say something but was not sure if he should.

She was not the type to urge him to do so.

She was used to waiting.

But she felt like now was the time for that urging, so she spoke to him as he wore the backpack and completed his preparations.

“Is there something you want to say?”

“Yes. You’ve been thinking about something lately, haven’t you?”

Azuma admitted to it.

So from here, Miriam only had to ask what he was going to do. But she could not think of a safe way to say the rest.

Asking him what he was thinking about might be simple, but given how long he had been worrying over it, that seemed too casual and a lot like she intended to reject it.

But she also felt like that casualness was exactly what he needed at the moment.

She was the one that had urged him to speak, so if she was to continue the conversation from there…

They started speaking at almost the same moment.

Azuma looked up and she shut her mouth.

And the first to react was Miriam.

She held out a hand.

He really is good at throwing off my plans, she thought. What a pain, she added with a mental sigh of resolve.

“I was only trying to ask you what it was you wanted to say.”

Now she too had exposed her great interest in him.

He immediately nodded at her question.

And he meaninglessly looked to the left and right.

“It wasn’t just last night. For a while now, I’ve been wondering if there really is nothing I can do.”

I knew it, thought Miriam.

This was why he had been going on walks with her and looking after the girl.

…It was all a way of searching for something he could do.

He had also started some part-time work, so his way of thinking had changed a good deal.

“It is important to understand the other side, but you can’t let yourself empathize with them too much.”

“I think we could manage an…approach that crosses over between this side and the other side.”

“What made you think that?”

“A lot of the things I’ve seen…but I think it was mostly when we went to Novgorod.”

The translucent girl then spoke up while half sunken into Miriam’s arms.

“That’s right.” Azuma smiled. And he said, “When everyone was speaking with Lady Yasuhira, Vice President Honda-kun was thoughtful, Asama-san was hesitant, Aoi-kun helped out, but if the various bonds of the current world can be found in discussions of history like that…”

“I could take responsibility and-…”

Sorry, thought Miriam with a sigh.

…But he’s such an idiot.

The way of thinking from his imperial lifestyle would crop up in the weirdest places.

“Do not take responsibility when it will only make things worse. Everyone will work together to reach a positive resolution. …That’s what our classmates are sure to say.”

“You barely ever make an actual appearance, so if you took responsibility, you really would be acting as a puppet. It would only harm Musashi’s reputation. Besides, you’ve begun a secular life. So…”

Why am I so irritated? she wondered.

“No one will take you seriously if you start talking about taking responsibility. So…”

“What if you gave them advice instead?”

She had only meant it as a possibility. But…

Azuma raised his eyebrows a bit as he spoke.

His strong tone made Miriam think he was going to ask her not to make fun of him.

And then Azuma continued.

“The thing is…I don’t know enough about history to give advice.”

Azuma nodded with confidence at what he had said.

After all, the imperial history was the “official” history. He had learned that all too well when listening to Sanyou in the library before going to Novgorod.

Besides, they had Neshinbara and Asama for that kind of thing. His knowledge and support were far smaller than theirs. There would probably be times when his little knowledge fit perfectly in the gaps of their knowledge, but that was not the same as giving advice.

“That’s why I want to take responsibility.”

“You’re more than I had bargained for.”

Yay, she complimented me…or not. That glare says not. I’ve figured out that much. I fell victim to this so many times before I did.

But Miriam held the translucent girl tight as she spoke.

“Is there anything you can do?”

“Right now, probably only making a living by working part-time.”

Azuma felt like so many things had been brought back to square one. If this was how it would be, he wished he had spoken to her sooner and gotten her help in restarting and changing direction. However…

If he was thinking that way, it would mean he did want to do something.

He had likely already made that decision in his heart. After all…

…Everyone is working so hard.

This might be sudden, he thought as he spoke.

“Everyone has such a hard time just making a living.”

“So you noticed. Just supporting yourself requires a lot of hard work.”

He had realized something recently.

…People aren’t just working for their own lives.

The scope differed from person to person, but everyone supported a portion of the nation known as Musashi.

If he left that position, it would create a gap in Musashi.

Someone else could probably fill that gap, but it would still require rearranging the pieces that composed Musashi.

It was the same with his pay. The corporate group could not print their own money, so the corporation was simply taking some of the money circulating throughout Musashi and giving it to someone who was in charge of a portion of Musashi.

By working, he was in charge of a portion of Musashi in some way.

“It hit me when I was paid for helping with the Musashi’s repairs recently.”

“Yes, that does make it feel like you’re ‘making’ Musashi.”

“Yeah…it’s especially obvious with those of us directly working on it, but it’s also true for Naito-kun and Naruze-kun who carry the parts, for Ohiroshiki-kun who supplies food, and for everyone else too.”

“Then wouldn’t that be enough for you?”

“Hmm,” groaned Azuma as he thought about Miriam’s question.

After a few beats, he answered her.

“You see, it’s about something Aoi-kun and Horizon said. If anyone is feeling they need someone to take responsibility for their lifestyle because they can’t do anything and always need help, then they should go join those two.”

“I see.” Miriam held the girl. “It sounds like papa is leaving to be with a boy…”

“L-let’s stop that.” Azuma sighed and opened his mouth. “I can’t say all that is true for me and…needing someone to take responsibility for my lifestyle? I don’t think I’ve been living like that.”

“If you did go there, I think there would be some very annoying parts unless you had established some relationships there already.”

That’s true, thought Azuma. At the moment, Asama and Mitotsudaira seemed headed in that direction, but they had strong relationships as a knight and an old friend.

But aside from that…

“My position is different from other people’s, so I thought I might be able to use that somehow.”

“If you take too long, you’ll reach the expiration date on that…”

When she said that with a nod, there was nothing he could say in response. However…

“Did you ask any of them for advice? Like that king?”

“Then use this study camp to do that. They’re experts at that kind of thing, so they should give you an answer if you are indeed useful.”

With that, Miriam moved her wheelchair forward and started herding him out of the room.

What? he thought, but she glared at him.

“You’re welcome. It’s only to the door, but I’ll see you off. …Also.” She continued with a sigh. “No matter what you do or what happens, as long as you come back to us, everything can return to normal. That alone I can promise you.”

“Our promise to not interfere with each other’s lives is already falling apart and I can’t let it get any worse.”