Chapter 55: Passerby in a Place of Descent[edit] 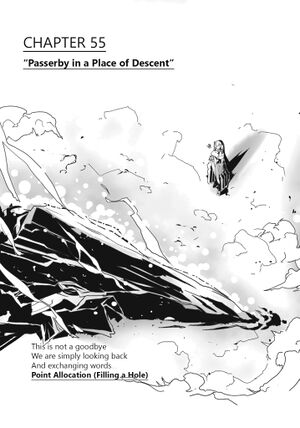 This is not a goodbye

We are simply looking back

He could not move his legs.

Even though he had been performing so many evasive actions and had just been charging forward.

His legs would not move as if the soles of his feet had sprouted root.

It’s no use, he decided.

He could not move. So…

With that, he collapsed forward.

And he belatedly remembered that the sun was shining on the center of this hall.

That warm sunlight made him sleepy. And…

That was the ether light that composed his body.

His “mold” as a dragon had lived for nearly a thousand years, but it was old, falling apart, and attempting to return to heaven.

I can’t believe this, he thought. I really have gotten old.

So he simply said what he had to say.

“Be careful down there. Sasuke is taking this seriously. And…”

While lying on the ground, he sensed a movement within the ruins.

“These ruins are going to collapse soon. …So hurry.”

Asama nodded at the dragon’s words.

It was true the ruins were both rumbling and…

Unturning: “They’re tilting. Only a bit though. Still, they were already somewhat tilted, so I doubt this is going to stop.”

Vice President: “I guess I should ask Naito and Naruze to prepare for a rescue…”

“That’s right,” said the others as they exchanged a glance and hurried toward the passageway deeper into the ruins.

Asama’s group followed. They first moved into the sunlight in the center of the hall.

While she ran, Asama pushed on Mitotsudaira’s back. So did Kimi as she caught up from behind.

“If you have to say ‘still’, then you’re not fine at all. …Get my foolish brother to rub your chin later.”

Since Mitotsudaira gave a sigh of bitter laughter instead of protesting, she must have been truly exhausted.

However, there was a dragon in the center of the hall. He was falling asleep and scattering into the sky.

When she passed by, Asama decided to do whatever she could to help.

She had permission for the Asama Shrine to intervene in this land, so…

She came to a stop and paused for a moment, but then she purified and tuned the surrounding space.

The ether contained in a Celestial Dragon-sized “mold” was trying to return to heaven and to the ley lines. She figured it was only polite to purify it.

When she did, the dragon moved his head a little.

He was large, but once she paid attention, she realized he had the voice of a child.

She sensed no ill will or malice there. And Hanami detected no hostility.

Asama listened to the dragon’s words.

“Do you always do that?”

Behind her, Mitotsudaira stopped and took a fighting stance, so Asama gestured for her to relax.

Did he mean the purification?

If so, her answer was obvious.

“You can think of this as Shinto etiquette. When a soul is freed, we give it the comfort of purification so that it might permeate this land and world, become a local god, and be reborn someday. That is how it has been since the Age of the Gods before even the Age of Dawn.”

“…Is that so?” asked the dragon. “Hey, do you know…a shrine maiden…that wears a…cherry blossom symbol?”

While wondering why he was asking, Asama answered his question.

“We used that on our old equipment.”

The dragon opened his eyes a bit at that.

His weak eyes looked her way and then looked to the objects piercing the ground around him.

He saw the three penetrating arrows there.

Asama did not know what he was trying to say, but a thought occurred to her.

He had dodged her trick shot in the very end. So…

“You defeated me here.”

When he heard that, the dragon narrowed his eyes.

He let out a long breath. He was most likely using the last of the air remaining in his lungs.

Horizon spoke while looking back at the dragon who had ceased to move.

“I wish I had been able to speak with him.”

“Didn’t we speak with him plenty?”

“Judge,” said the idiot as he ran alongside her, took her left hand, and grabbed her left arm.

Asama’s healing charm was wrapped there.

The idiot squeezed her arm at that spot.

She felt pain. It was a mechanical arm, but she could not hold things properly without a sense of pain. As a machine, however, she was capable of shutting out the pain reaching her.

“Remember that,” said the idiot. “We both confirmed how serious the other side was and left something with them.”

She did not understand a part of that, so she asked about it.

“Don’t tell me you just thought that sounded cool.”

“Think before you speak!!”

Just as Horizon prepared a right punch to reinforce everyone’s tsukkomi, Asama, Mitotsudaira, and Kimi caught up from behind.

“Are you two oka-…ah! Toori-kun, why are you squeezing Horizon’s wound!? I didn’t think you were that kind of person!”

“What happened to your worry for me!?”

But Horizon ignored the idiot and sighed. And then…

“I do not understand.”

While walking and while aware that she was at the center of them all, Horizon opened her mouth to respond.

“When is the right time for us to live and to die?”

That question had been on her mind lately.

She wished they could just never lose anything, but all things were eventually lost and went away. She knew keeping things from being lost required work, but she also had a question.

What was the best way of handling the times when something was lost and went away?

If they felt they had handled it in the best possible way, those left behind would feel self-satisfied instead of sorrowful and that would somewhat reduce the pain.

So she asked her question.

…When is the right time for us to live and to die?

“Did that person meet a proper end here?”

“You’d have to ask him to find out,” said the idiot next to her.

But Horizon felt his answer was useless. After all, you could not ask someone once it was already over. So…

“He has already gone away, so how are we supposed to ask him?”

“Huh? There’s another one, ain’t there? And there are a ton more after that. …So let’s go ask them what they think about going away. And…”

“Sanada’s gonna be crushed. So we can ask them what they think about their coming defeat.”

Horizon could accept that.

The leader of the Sanada dragons was fighting down below.

The occasional tremors they felt were proof that Futayo and Gin were fighting that dragon.

Horizon faced forward while hoping those two were safe.

She squeezed the wound on the idiot’s arm, drawing out a cry of “nwohhhhh!”

“I would like a lesson on life from a Celestial Dragon who has lived for a thousand years. If he is willing to teach us, I would like to learn.”