Chapter 58: Reperformers on the Stage of Conclusion[edit] 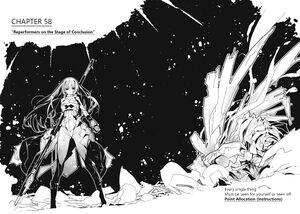 Must be seen for yourself or seen off

When Masazumi arrived in the hall, she saw the conclusion of the battle.

A dragon was collapsed on the floor and Futayo slowly sank to her knee before him.

It almost looked like she was kneeling in thanks.

When she noticed the smile on Futayo’s face, Masazumi looked back to the others and nodded.

They had to continue on past this hall.

There were already faint tremors running through the floor.

“You should hurry,” said the dragon along with a rough breath.

He extended his forelegs, took a crouching pose, and then stood up.

“…You came here to visit underground, didn’t you?”

“Judge,” confirmed Masazumi before asking a question. “What’s below here?”

“Not even I know. …It seems Saizou visited it in human form, though. Also…everything there now should only be what was gathered here twenty years ago.”

“Yes,” said the dragon as he unsteadily rose fully to his feet.

Ether light scattered from his entire body like spilling blood.

He was preparing to ascend into heaven.

His end was nigh, but he still managed to speak.

“Matsudaira Nobuyasu inherited the place within here and began some kind of independent research. …Then he committed suicide in there and Sakai came to destroy the facility on Motonobu’s orders. That was fifteen years ago,” he said. “Now, go. And return. …I heard what you said, Musashi princess. You wanted to ask something about a dragon’s death, didn’t you? I will keep my life on this earth until you return. And…”

A tremor ran through his body, but he turned to face the other way.

Futayo and Gin were there.

He lowered his head a little and spoke to them.

“Can you…play along for just a while longer?”

Futayo nodded, stood up, retied her hair with a string, and raised her spear.

Giant forms moved through the sky.

Thawed regions dotted the snowy land and Yoshiaki looked to the sky in the center of one.

A few silhouettes hurried south in the sky.

Some were Terrestrial Dragons, but others were younger Celestial Dragons. Yoshiaki commented on the direction in which they were all headed.

“When a thousand-year-old Celestial Dragon dies not of old age but in battle, the dragons watch reverently from afar in the hopes of receiving their blessing.”

“Yoshiaki-sama, how do you know that, mon!?”

She nodded at the Mouse salmon next to her.

A valley city opened up toward the ocean and its multi-layered structure was revealed by the shadows of the setting sun.

She walked toward the city with her eyes still on the sky.

“All I ever do is lose things, Shakenobe.”

“Things are always so cheerful with you around.”

Yoshiaki narrowed her eyes at the sound of them slicing through the wind.

“This is an age of change, Musashi. This is a good night for drinking. But…”

She looked to the southern sky.

There, the sky still contained some light from the summer afternoon.

“I hope you can ask about the meaning of inheritance. And I hope you discover the mysteries of this world. …I was unable to delve too deeply into either topic.”

A rumbling arrived from the hall behind them.

The battle has started up again, thought Narumi as she ran through the narrowing stone corridor.

The noise never stopped. The floor shook and the stone tiles occasionally rose from the ground.

Celestial Dragons were the greatest of the dragons, so Sasuke probably had no intention of holding back in his final battle.

Those Celestial Dragons had traveled across Europe. Narumi had seen Sasuke, Saizou, and the other Non-Celestial Dragons of the former Ten Braves a few times. When they held a joint festival known as the Oushuu Council, the dragons had sometimes participated and drank with them.

They had lived peacefully with people for 400 years.

The floor and walls rang with the sounds of battle.

The Celestial Dragon was fighting to burn through the whole of his being.

The battle was a ritual to bring peace to his soul.

Narumi was glad those two girls were his opponents.

After all, the Musashi Vice Chancellor had an awkward fighting style. And she would not hold back or show sympathy for an injured opponent.

Meanwhile, they both threw all their strength at each other.

It was likely the girl’s inexperience that had prevented her from getting in any solid hits other than the cut. She also needed more than an instant to reach her top speed with the Soaring Wings acceleration spell.

She had done well to fight so well while falling behind like that.

…Does she just have a sense for it?

As Narumi wondered that, she found the Musashi Vice President had moved out ahead.

There was no point in telling her not to. Narumi just had to move out ahead of her. However…

“We will take the lead.”

The ninja and the English princess moved out front.

Having a ninja lead the way was indeed the right thing to do. So Narumi and the half-dragon fell back while the ninja, English princess, and the Musashi Chancellor’s knight took the lead.

The Musashi Chancellor, princess, and shrine maiden were in the center. So if Narumi and the half-dragon were in the back…

This was their current “formation”.

Even without the Vice Chancellor and the other Special Duty Officers, they could reach the depths of these ruins with this formation.

“We are not powerful,” said the half-dragon. “We are merely a collection of eccentric idiots.”

“True,” she agreed while wondering if she was one of those “eccentric idiots”.

She did not dislike the idea.

While taking the lead, the ninja suddenly raised his hand.

“The passageway is opening up!”

“Judge,” replied the others as they hurried forward.

When they saw light up ahead, they picked up the pace, but Narumi noticed something.

She realized what that light was.

Pushed on by Narumi’s voice, Tenzou reached that spot and gasped.

There was a giant crater before his eyes.

Its surface was covered by a forest, but the depression had a diameter of approximately three kilometers. The earth had been torn up in a giant hemisphere.

Some kind of massive destruction had gouged into this region.

But, he thought. The surrounding crust has crumbled inside.

In that case, the original hole may have only been about one kilometer, he corrected himself based on a hasty estimation. Mary then spoke up as she viewed their surroundings next to him.

“The crust was tuned by a fairly powerful spell. And…quite recently.”

“Oh, uh, I mean recently in terms of the earth’s crust…”

Mary reached a hand into the air around her and drew in the lights of small spirits from within the trees which had grown taller than them.

“So around that time…”

Mitotsudaira started to say something behind them, but fell silent.

Tenzou knew why. Due to the trees and other plants and due to the collapse of the surrounding land, the area looked like a valley or a vast depression.

But they had once seen the creation of a similar land structure.

“Is this the result of a ley line reactor explosion…?”

No one could answer his question. However…

They must have regained their connection to the outside world because a divine transmission reached them.

It was from Sakai.

Mitotsudaira listened to Sakai’s voice while she exchanged a glance with Mary.

“You all should take a look around that depression.”

Mitotsudaira did so. And something was rising from the collapsed edge of the vast depression.

Something like a thin mist was rising into the air. It seemed too clearly formed to be the shimmering of heat from a geothermal source, but Asama seemed to know what it was.

“That is a barrier, isn’t it? And a stealth one at that.”

“That’s right. Ever since 30 years ago, you haven’t been able to tell where it is from above even if you know you have to be quite close by. That’s why you had to go in through the ruins. …You couldn’t use divine transmissions inside there before, but that might be due to how close the ruins are to collapsing. If things look dangerous, get on out of there, okay?”

“Judge,” replied Mitotsudaira with her eyebrows raised. At the bottom of the collapse, the 1st Special Duty Officer had found the floor.

“Principal Sakai. …Did there used to be a small facility at the end of the passageway?”

It was. There was a slanted structure at the bottom of the collapse. Instead of being caught in whatever had caused the depression, it must have simply slid down when the surrounding crust collapsed.