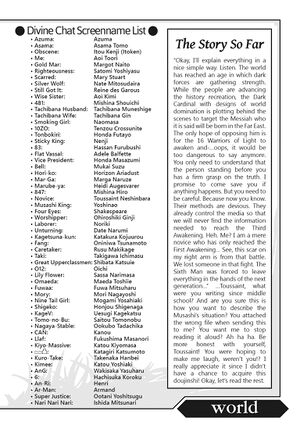 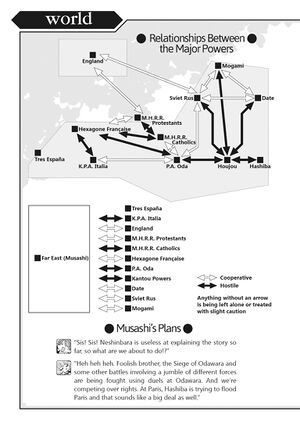 The Story So Far:

“Okay, I’ll explain everything in a nice simple way. Listen. The world has reached an age in which dark forces are gathering strength. While the people are advancing the history recreation, the Dark Cardinal with designs of world domination is plotting behind the scenes to target the Messiah who it is said will be born in the Far East. The only hope of opposing him is for the 16 Warriors of Light to awaken and-…oops, it would be too dangerous to say anymore. You only need to understand that the person standing before you has a firm grasp on the truth. I promise to come save you if anything happens. But you need to be careful. Because now you know. Their methods are devious. They already control the media so that we will never find the information needed to reach the Third Awakening. Heh. Me? I am a mere novice who has only reached the First Awakening… See, this scar on my right arm is from that battle. We lost someone in that fight. The Sixth Man was forced to leave everything in the hands of the next generation…” …Toussaint, what were you writing since middle school? And are you sure this is how you want to describe the Musashi’s situation? You attached the wrong file when sending this to me? You want me to stop reading it aloud? Ah ha ha. Be more honest with yourself, Toussaint! You were hoping to make me laugh, weren’t you!? I really appreciate it since I didn’t have a chance to acquire this doujinshi! Okay, let’s read the rest.

[Same map as before, but with Kantou Powers replaced with Houjou]

Relationships Between the Major Powers:

[Same as 4-A, but with Kantou Powers replaced with Houjou]

Toori: Sis! Sis! Neshinbara is useless at explaining the story so far, so what are we about to do!?

Kimi: Heh heh heh. Foolish brother, the Siege of Odawara and some other battles involving a jumble of different forces are being fought using duels at Odawara. And we’re competing over rights. At Paris, Hashiba is trying to flood Paris and that sounds like a big deal as well.