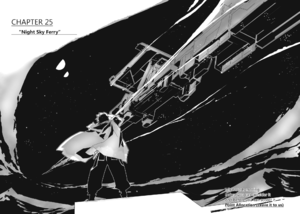 Before you can consider it

And before you can accept it

Point Allocation (Leave it to us)

“What is the Musashi doing here!?”

That was exactly what Tadaoki saw when he looked up.

The sky had opened up.

The heavens had split apart overhead and continuing to the west.

Why? he wondered. Oume, the Musashi’s 3rd port ship, looked close enough to reach out and touch, but that ship should have been leaving on the way to Nördlingen.

But he did not have a chance to ask any further questions.

The answer was presented to him as if to suppress any and all questions.

The sky was splitting apart.

The atmosphere rumbled over a distance of around 30km.

Then the sky tore in a straight line starting from the 3rd port ship.

“The Musashi’s ships are all lined up!?”

Each ship was nearly 2km long and they were lined up with about a kilometer between each one.

All motion on the battlefield stopped for a moment.

Magoichi did while swapping out Yatagarasu’s barrels.

Kuki did while commanding his ships and controlling the overall movement on the battlefield.

Asano and Kani did as they watched things play out. Even Konishi’s group was focused on the giant structure appearing through the rift in the Kantou sky.

The ships were arranged in something like a 30km archipelago.

Everyone was confused by the unusual arrangement of the ships, but none of them could find anything to say either.

The Musashi had not left.

In fact, its tail end extended nearly to Edo Bay.

Until now, it had revealed Shinagawa’s bow to give the appearance of moving west, but…

No one answered the question Katou Yoshiaki asked on her southward-bound warship.

But Mouri-01 was different.

She spoke while aiming her pseudo anti-ship cannon at Nabeshima’s stopped mechanical dragon.

“Your forces are focused on us, so it can finally begin.”

“What can finally begin!?”

“Testament.” She fired the cannon at close range and spun around as she answered. “The Kantou Liberation.”

Did that mean the battle had yet to begin?

But, he thought. Why would they do this?

What reason did the Musashi have to spread itself out in a long line like that?

He did not understand, but an idea did occur to him.

…Is it a giant cannon barrel?

No, the Musashi needed ships on the left and right to fire its main cannon. But then what did that long, barrel-like arrangement give them?

They had created a 30km-long field of invisibility. So what would they be doing with that long area that no one could see inside of?

Tadaoki realized it was a barrel after all.

In the sense that it was a pathway used for acceleration.

The Musashi was launching something such that no one else could see it. And it had to be…

As soon as he shouted that, the air exploded off either side of the lined-up Musashi.

The Musashi’s port and starboard sides were used as 30km acceleration corridors and the repulsion of its gravitational acceleration was used to launch transport ships like shells.

Yoshiyasu shouted from the deck of one of the transport ships launched from the port side.

Her hair fluttered in the high-speed wind. She could hear Righteousness whistling in the wind where it sat behind her.

But it was obvious what they were doing.

“All Satomi forces will now enter Satomi using the Edo Bay route! We will generally be using the land route!”

And there was one other thing they had to do. The Musashi Vice President explained on a sign frame.

“At the same time, the Musashi forces will abduct one of the enemy fighters: Nagaoka Tadaoki!”

A sign frame displayed the Musashi forces on the foremost transport ship.

They would not be participating in the Kantou Liberation, so they had a different reason to join the charge of transport ships.

“We will take Nagaoka Tadaoki to Nördlingen! Our time limit is one hour. That is the absolute latest we can leave if we are to arrive at Nördlingen in time. So we will abduct him and bring him back to the Musashi within an hour. Got that!? If you’re late, we’re leaving you behind, so if that happens…um, what should they do?”

On the screen, the idiot sister turned to the side.

“W-wait!” protested the Musashi Secretary. “You spoke three letters of your nickname for me, so I have the right to speak!”

What is with that new rule and new form of pettiness?

But he pushed up his glasses and struck a pose with his right hand before speaking.

“Heh. If you get left behind, I suppose you will just have to go ahead and fight in the Kantou Liberation.”

“Heh heh. Did you hear that, everyone? If we failed our mission while Horizon sleeps, I was thinking we could head to Mito and soothe our hurting hearts with hot springs and yakiniku until the Musashi returned. How does that sound, Mitotsudaira? Oh, and the white rice comes with natto!”

“Judge!” replied the others on the lead ship.

…I guess they did find an excuse for this.

The sign frame showed those who had chosen to participate in the Kantou Liberation: the Tachibana Couple, Musashi’s 6th Special Duty Officer, most of the Musashi warriors, and…

“Wh-why are my parents with us!?” protested the Mito Lord.

“Oh? Because Hashiba would take issue with us fighting for Mouri instead of on their side. Right, Asama-san?”

“Eh!? Y-yes. And, Mito, you aren’t going to get many chances to fight a battle alongside your parents.”

“Heh heh heh,” laughed the idiot sister. “So you’d better thank Masazumi for giving you this opportunity! I’m going back to sleep, so the rest of you bring Nagabuto back here!”

“Sure, sure,” said the others while the Reine des Garous smiled bitterly.

But the woman soon put on a serious expression.

“Nate, feel free to show off. Just forget I am here at all.”

She grabbed her daughter’s shoulders and spun her around.

The sign frame footage kindly turned to show who the girl was now facing.

“The Musashi Chancellor’s group sure does get along well,” commented Yoshiyasu.

“Don’t be shy, Flatty! …We can only hang out with you for the first half hour, but we’ll help out with the Kantou Liberation as much as we can.”

“I mean, we’ve gotta help you make up for that dumb stuff Yoshiyori did!”

After a short pause, Yoshiyasu nodded at the nudist’s words.

“Judge. You’re right.” She clenched her right hand. “I need to complete what the previous Chancellor should have done but failed to do.”

“Once this battle has been won, I will assign the office of Satomi Chancellor to myself.”

And she saw everyone silently nodding on the sign frame. On another sign frame, she saw Yoshiaki smiling on the bridge of the Yamagata Castle which had joined the Mouri fleet in the south. The woman glanced over at her and spoke.

“Then we will have to help you in every way we can.”

“Of course, of course,” she said with a smile. “I was already planning to.”

The transport ships were descending throughout the conversation.

They were headed to an extreme low altitude. The quickly-modified transport ships had transport vehicle wheels attached to the bottom.

They were headed to the eastern land, which meant…

“The great ruins. Long ago, when Edo was the capital of the Far East, this central road was built to connect east to west. We will use that elevated route to pass through the Great Edo Ruins at low altitude and quickly reach Edo Bay.”

“Why are we taking such a low altitude?” asked Musashi’s Vice Chancellor.

“Warship cannons generally have difficulty aiming below the horizontal. And the enemy’s ground forces will be unable to stop the momentum of our charging transport ships. Of course, I am sure not everything will go as planned, but-…”

Something happened while the Tachibana Wife answered the question from a different ship.

The Hashiba ships remaining over Edo fired on the transport ships.

The artillery fire was not going to hit, but it meant they had already been located.

The battle would not be over for more than 3 hours and the Musashi group had an hour to carry out their plan and leave.

Yoshiyasu wondered what she could do with all that time.

It was not about whether she could do anything.

She was here because she knew there were things she could do. So…

…Which of the things I can do should I choose?

Yoshiyori and her sister had once made that decision. And now it was her turn.

She was not alone.

She was not here to die.

“Help me travel this path of life, everyone.”

Several voices answered her – from the transport ships, from the Musashi, and from other ships.

Then the transport ships slipped below the arriving shellfire and toward the ruins below.

If they continued a little further, they would reach the Great Edo Ruins.

The transport ships traveled along the elevated road leading there.

A high-speed race began as soon as the wheels on the bottom of the ship touched down with a strained creaking sound.

A sign frame said they were moving at 270km/h.

They were approaching the Kantou Liberation with that speed. A battle prominently featuring Satomi was about to begin.