Final Chapter: Me in a Place of Rest[edit] 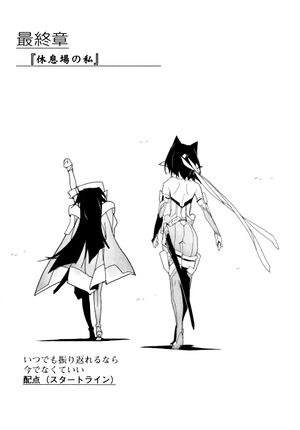 I can look back whenever I want

So I don’t have to now

“Okay, now we can rest easy as we head into summer break! Our next task is coming up with a plan for Kyou and Akechi during the break!”

Yoshiyasu saw Ookubo standing in the center of a park in the Satomi base.

The light of morning already surrounded them. They had left the various command posts to everyone else, so this functioned as the center of communications with Musashi.

…Kind of weird for the center of the Satomi base to be a park with playground equipment in it.

Musashi’s 6th Special Duty Officer was asleep on a wooden slide. Yoshiyasu had thought the sunrise would be too bright, but the girl was skillfully using her prosthetic arm as a roof.

Tokishige was sleeping on a bench with a mat over her head. She had been too tired to head back to the command post for a blanket, so she had gone straight to sleep and then grabbed a nearby mat when the sun grew too bright.

The grip of a large machete stuck out from under her arm, so she looked a lot like a corpse at first glance.

“But,” said Yoshiyasu. “It really is weird. I imagined the parks like this would have been destroyed.”

“They were occupying you, but there was no need to be assholes,” replied Ookubo. “If you had won the war with Houjou, would you have destroyed the parks on Houjou land?”

“I guess not,” was all she could find to say.

She realized you could not judge a book by its cover, or…

“People don’t do what you expect them to do, do they?”

She was looking to the eastern ocean where she could see 6 giant black and red ships.

That was the Azuchi. Satomi’s occupiers were currently withdrawing to the Azuchi. All the transport ships and warships were headed there and moving between its individual ships.

“They’re probably collapsing to the deck and sleeping on the spot,” said Ookubo. “They’re human too, after all. The only differences are in position, interests, nation, and religion.”

“Huh? Like I said, we’ll be working out a way to intervene in the Honnouji Incident once the break begins, but until then, we have to stay here and monitor the Azuchi until it leaves. Also…”

“With a withdrawal of this scale and with all those big ships, they’re bound to have to abandon some things on their way back. It might be nice to nab ourselves some rewards.”

“You are good at that stuff, aren’t you?”

“I am the Satomi Liberation’s negotiator for as long as I stay here, so just leave it to me.”

“I see,” said Yoshiyasu while leaning back against a pillar to a washbasin’s roof.

Then she took a breath and sat down.

It suddenly hit her that the Satomi Liberation really was over.

I must be tired right now, thought Yoshiyasu. It was only the lingering excitement of the battle that kept her awake.

It felt a lot like repeatedly choosing to stay up later and later into the night. But in that sense…

“When you get down to it, I was hoping for a lot out of the Kantou Liberation and I ended up enjoying it a lot.”

“I only said it because I knew you would say that.”

“Is that so?” replied Ookubo. But…

Yoshiyori and her sister felt a little more distant now.

At the very least, there was more distance between them than before last night. So…

Still seated, she turned to face the eastern ocean.

The Azuchi was there. The people she had been fighting a few hours ago were on and in that ship.

Strangely, she felt really close to them right now.

But not in a friendly sense.

They might be enemies, but they still felt closer than Yoshiyori or her sister.

It was a strange thing, but she decided to hold that feeling in her heart.

“I have them to thank for getting over my hang-ups about Yoshiyori, my sister, and the others.”

The fight would continue and resentment would likely rear its ugly head again. She would probably start feeling those things again even as she reviewed Satomi’s situation here. But…

“Why is that? They destroyed us and we lost so much because of them. But…”

“We wouldn’t be here now without them.”

“That’s not true. We are here now because you chose to fight back. Or, if you insist, you could say it’s both,” quietly said Ookubo. “You could only ever see one side of that before, but you’re gradually managing to look at both sides. And…”

“Judge. This was always the case, but now you are aware of it. You could say that means you have finally arrived on the starting line.”

That was the same thing she had thought to herself earlier. So…

…I should probably get some sleep.

She would let time advance. The present moment was complete and she felt like she would not learn anything more from it.

But then Ookubo clicked her tongue.

“Hey, Satomi Student Council President. This could be trouble.”

“When aren’t we dealing with trouble?”

“This is different,” she said. “You have a makeup lesson to complete. Actually, so do we. By which I mean everyone in our academy. Remember the Terrestrial Dragon that went nuts on our way to Sanada?”

I have a bad feeling about this, thought Yoshiyasu while seeing Ookubo speak out of the corner of her mouth.

“The answer sheets for the final day were apparently blown away during all that.”

Yeah, that wide-range dragon cannon was pretty impressive, she thought. But…

“Don’t ask me. I’m headed to the command center. Kanou-kun is there and we might need to regroup with Musashi right away.”

Ookubo then went to wake up the 6th Special Duty Officer sleeping on the slide.

Yoshiyasu went to Tokishige. Musashi’s exams had nothing to do with her, but it would be best if she knew what they were doing.

“Hey,” Yoshiyasu said to Ookubo. “I’m a pretty good fisher. Did you know that?”

That was a long time ago. At around midday, someone from the city would come calling for her. She had found some small pride in holding up her catch for them to see. Things looked a lot different now.

“But are they really?”

It was not midday right now and someone else was calling for her.

But she still did have someone to call for her. 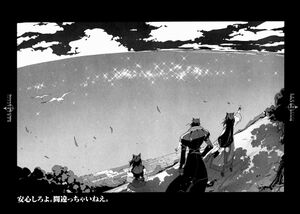 And she thought of some people to whom she wanted to show off these battle results.

“Pretty pathetic that I’m being called back for a makeup lesson. But I expect the next battle will be at Kyoto. What do we do about Akechi Mitsuhide and how do we intervene in the Honnouji Incident? I should really ask them about that after my battle report.”

Facing forward, she smiled and she did not look back again.

–Rest easy. You were not wrong.