Intermission – The Lords of Unusual Books

The overlapping laughter of children.

The small room had a sweet fragrance floating within it.

In the small room devoid of light bulbs, the only thing that could be called illumination was the moonlight coming through the window.

“Neue and Neosis, good work. I’m bad with machines so you really helped me out.”

“It’s simple, you just have to memorize it.”

A tall, lean young man with a brimmed hat worn as far as his eyes answered with a smile.

He wore a black hat, black suit and black shoes. Amidst the clothes which were a uniform jet black, pale blond which peeked through black hair was fluttering in the wind.

“Igun-I is terrible with machines to a surprising degree.”

“Yeah, he even does the laundry by hand instead of using a machine.”

“But you know, you two, it’s kinder on your laundry to do it by hand.” 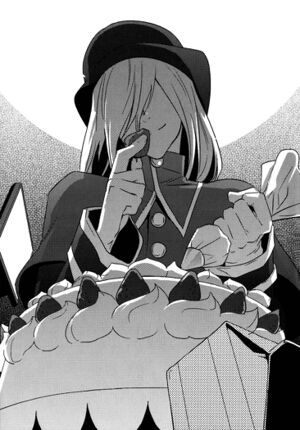 The laughter resounded once again.

“You should share that kindness with the person from Tenketsu Palace.”

“Yeah, it’s pitiful being teased by Igun-I. Around now, he should be fearful.”

“I’d be happy if he realized who it was. I can’t help enjoying wondering if he’ll come to meet me quickly.”

“Worry not. It’ll be done once I decorate it with strawberries like this. ……There’s just one thing. The truth is there were many times more strawberries than this but they were eaten by Natraja-san.”

The Lord of Unusual Books drooped his shoulders as if there was no greater disappointment than this.

“You know, Noesis, that’s called ‘food snitching‘. It’s the natural enemy of girls so if you do it too much, you become fat.”

In an instant, the dim room was dyed bright red.

It was a ‘brilliant red‘ more red than the ripened strawberries. The lights that painted everything red lit up in the air one after the other with a fwoom sound.

“If it isn’t Natraja-san, have you finished your job at the Governmental Sector?”

A woman appeared in the room without a sound.

“But Natraja-san, don’t you like sake? I think you would have been fine accompanying that person for sake.”

“Drinking sake is highly situational. I like drinking with just two in a quiet place. I hate looking at groups that just drink sloppily.”

The woman called Natraja raised an empty glass with her snow-white fingers.

“Then Natraja-san, would you also help with the decorating?”

“Oh my, didn’t I help with baking it? Though I got the heat a little wrong and scorched it a bit.”

The woman smiled with her glossy lips touching the empty glass. Still in that posture, she reached one hand out to Igun-I’s black hat──

“Goodness. If that hadn’t happened, I wouldn’t have had to redo this.”

Just before that hand touched the hat, Igun-I pressed down firmly on it.

“By the way, about what you were talking about, did you ask the twins to do something?”

“He did, he did; we sent a message to the floating continent‘s Tenketsu Palace.”

“Yeah, he requested it. We sent a message.”

“It was a minor matter. I wanted to trouble my beloved person. But if it wasn’t done well, the message would have a record left, right? That’s why I asked the twins. It would be nice if he were to realize it was me.”

“You have quite the hobby there. While I was working seriously, you were playing innocent.”

The woman returned the glass to the table and sighed.

“This place has been discovered by the Governmental Sector.”

There was not a hint of wavering from Igun-I who continued to decorate the cake with strawberries.

“The Ninth of the aforementioned ‘Heaven’s Wheel‘──”

“So it seems. It looks like this place was located with that ‘Crimson Eye‘ before you and Maha gained control of Mikuva’s Crimson Eye. As expected, there are people that can use their heads well.”

“Fumu, and what is our response? What did the First say?”

Her response was simple.

“He was in the middle of training as always so he didn’t say anything. From the air about him, I would guess ‘How about you face them appropriately and turn the tables on them?‘”

“I haven’t seen the First -san do anything other than train.”

“Right─……even though it’d be okay to accompany me for sake sometimes.”

She gazed seemingly reproachfully at the transparent glass.

“Come now, how about you invite the Third sometimes?”

“No. What would I talk about with just the two of us? It’s the same as having an ornament for my partner. ──Well, the organization is on their way so I’ll have fun with them. I’d be happy if a wonderful gentleman were to come.”

She carefully picked out a strawberry decorating the cake and popped it into her mouth.

“Look, isn’t there a Sennenshi that wields a great sword? Umm……I think it was Leon. He’s supposed to look exactly like that person. Igun-I, you saw him at the floating archipelago , right?”

“Yes. They really are spitting images of each other. It’s an exact resemblance. They both wield great swords and the way he holds the great sword is also the exact same as the First -san.”

Her bewitching lips curved up and she sighed charmingly.

“O─kay. Isn’t that great, Noel, that we get to skip training?”

“I’m looking forward to it…………I wonder if Sheltis will come.”

“Mm? Did you say something?”

In response to the woman with good hearing.

Answering with a pure smile, Igun-I once again closed his mouth.